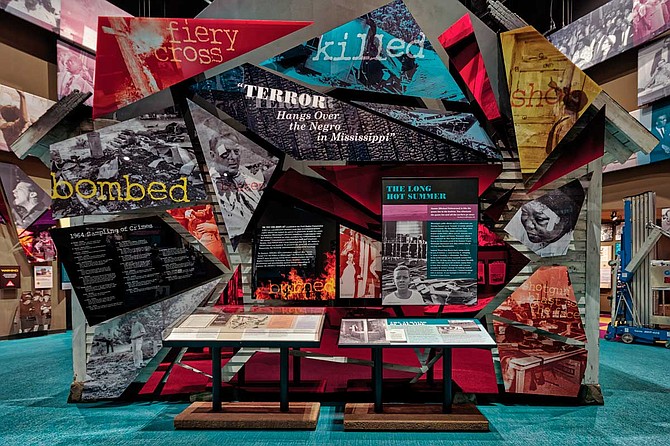 The Travel Attraction of the Year Award went to the Mississippi Department of Archives and History for its "Spirits of the Passage" special exhibit at the two Mississippi Museums. Photo courtesy MDAH

The Mississippi Tourism Association honored representatives of the state's tourism industry at the Governor's Conference on Tourism at the Trotter Convention Center in Columbus, Miss., from Sept. 22-24.

Rickey Thigpen, executive director and chief executive officer of Visit Jackson, received the MTA Member of the Year award during the ceremony. Thigpen has worked for Visit Jackson for more than 31 years and has implemented programs such as the Mayor's Conference on Tourism and the My City Campaign. He serves on the Mississippi Tourism Association Board of Directors and is chairman of the Tourism Mississippi PAC Board and Downtown Jackson Partners.

Real estate developers Ted Duckworth and Breck Hines received the Tourism Investment Award for their work on The District at Eastover, a mixed-use dining and shopping center that opened in 2011. In January 2019, they opened Cultivation Food Hall in the District, which includes ten restaurants and is the state's first and only food hall.

The Travel Attraction of the Year Award went to the Mississippi Department of Archives and History for its "Spirits of the Passage" special exhibit. MDAH opened the two Mississippi Museums, a 200,000 square foot complex housing the Museum of Mississippi History and the Mississippi Civil Rights Museum, in December 2017. From Feb. 1 through Aug. 11, 2019, the museums displayed "Spirits of the Passage: The Story of the Transatlantic Slave Trade," a traveling exhibit on loan from the Mel Fisher Maritime Museum in Key West, Fla. The exhibit attracted more than 18,000 visitors.

The USA IBC Ballet Competition won the Large Festival/Event of the Year award. The 11th USA IBC opened in June 10, 2018, at Thalia Mara Hall. The Gertrude C. Ford Opening Ceremony included 100 competitors from 17 countries. Attendance for the two-week competition totaled around 40,400 and generated in-state spending of more than $9.3 million.

The award for Small Festival/Event of the Year went to Cathead Jam. The fourth annual Cathead Jam brought in nearly 4,000 people. Festival organizer Cathead Vodka, the first legal distillery in Mississippi since the end of Prohibition, originally opened in 2010.

The "Follow Me to Jackson" Influencer Campaign won the award for Social Media Campaign of the Year. Visit Jackson asked social media influencers to promote Jackson through first-person narrative, images and video based on their experiences. Visit Jackson published those experiences to the discoverjxn.ms blog with the hashtag "#followmetojackson." The campaign has gotten more than 500,000 engagements on social media since it launched.

The Mississippi Volunteer Lawyers Project, an organization that gives legal assistance to low income people through both direct legal representation and managing legal clinics for people representing themselves who can't afford a lawyer, awarded attorneys Ellen Robb of Ridgeland and Seth Shannon of Jackson with Pro Bono Awards during the organization's annual reception on Sept. 12. 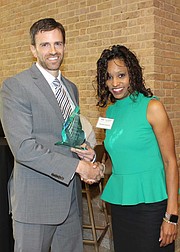 Volunteer attorneys for MVLP donated 2,193 hours of service worth an estimated $383,775 over the past year, a release from the organization says.

Robb is a member of the Mitchell Day law firm in Ridgeland and has worked as an MVLP volunteer since 2013. She has helped establish legal guardianships and stable homes for children whose own parents aren't the ones raising them, provided divorce services to low income clients and assisted a disabled woman whose late husband had sued her for unpaid credit card debt she incurred without her knowledge. Outside MVLP, Robb attended training to provide legal support to individuals affected during the recent ICE raids.

Shannon received MVLP's Curtis E. Coker Access to Justice Award during the reception, which recognizes outstanding pro bono legal services. Shannon has been an MVLP volunteer since 2011 and has handled 62 cases. The American Bar Association recently recognized him as an ABA Free Legal Answers Pro Bono Leader for his work answering questions through the legal help website ms.freelegalanswers.org.

He is an active volunteer with the Mission First Legal Aid Office and is on the Board of Directors of the Mississippi Housing Partnership, as well as the Young Lawyers Division Homeless Youth and Disaster Legal Assistance committees. Shannon is also a member of the Mississippi Bar's Access to Justice Committee and the Community Outreach & Pro Bono Committee of the Capital Area Bar Association.

MVLP also recognized the regional law firm of Bradley Arant Boult Cummings LLP for its financial contributions with its Chairman of the Board's Torchbearer Award. Since 2014, the firm has contributed $36,100 to finance 30 legal clinics across the state.

The LMG Life Sciences Awards honor firms, individuals and companies that offer innovative and challenging life sciences work and help drive the international market, a release from LMG says. A judging panel of global industry experts selects the winners based on formal research, case evidence and peer and client feedback.

Butler Snow received recognition for its work in pharmaceuticals, medical devices, health care and crisis management. Benchmark Litigation also named the firm as its 2018 "Product Liability Law Firm of the Year," and the firm is on The Legal 500: US and Chambers USA 2019 for product liability litigation.