Music and Art at WellsFest 2019 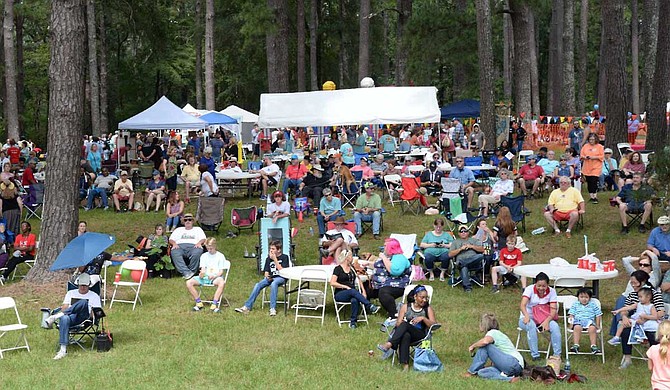 WellsFest 2019 features live music from a number of local artists and benefits the nonprofit Extra Table. Photo by Greg Campbell

"After the wedding, my father gave me a sum of money to pay the preacher, which is a southern tradition," White says. "I approached Keith with the money and thanked him for his service, but he said he wouldn't take additional compensation for it. I went back and told my father about it, and he said I needed to do something for that man and the church."

WellsFest 2019 has events, arts and music for everyone from kids to pets to adults. Photo by Brad Smith

White got an idea for what he could do after noticing a sign in the church for a building fund to remodel its sanctuary. White approached Tonkel and offered his services in booking musical acts and setting up a fundraising event to support the church's building fund. After Tonkel agreed, the two began organizing WellsFest, which became one of the first live music festivals in Jackson.

Since the festival began 36 years ago, WellsFest has raised roughly $1.5 million for local nonprofit agencies such as the Good Samaritan Center, Habitat for Humanity Mississippi Capital Area, Operation Shoestring, The Mustard Seed and more.

Wells United Methodist Church (2019 Bailey Ave.) in Jackson will host its 36th annual WellsFest music festival on Saturday, Sept. 28, from 9:30 a.m. to 4:30 p.m. at Jamie Fowler Boyll Park on Lakeland Drive. All proceeds from this year's event will go to Extra Table, a nonprofit organization that provides healthy food to places such as Stewpot Community Services, Gateway Rescue Mission, and food pantries at Tougaloo College and Jackson State University.

Art Night will take place at Duling Hall in Fondren and will include a preview party and buy-now section from 5:30 p.m. to 7 p.m., and a live auction of pieces that local artists have donated from 7 p.m. to 9 p.m. Mississippi native artist Ellen Langford will paint on-site during the event and sell her art at the end of the auction. Robert St. John, chairman of Extra Table, and Extra Table board member David Trigiani will also auction off a dinner for eight, which Ridgeland residents Kit and Mark Fields will host at their home. The meal will be "chef's choice," but John and Trigiani will make substitutions in case of food allergies. The Fields will also provide wines for the dinner if guests request them.

The golf tournament will take place at Whisper Lake Golf Club (414 Annandale Pkwy., Madison) in Madison beginning at 1 p.m. Registration is $400 per four-person team, and prizes will be available for first, second and third place, as well as for longest drive and closest to pin. The registration deadline is Friday, Sept. 20.

Wellsfest will kick off at 8 a.m. with a 5K run that will begin and end at Smith-Wills Stadium, with a 1-mile fun run afterward at 9 a.m. and a pet parade on the festival grounds at 9:30 a.m. All 5K winners will receive a trophy that residents of The Mustard Seed in Jackson will individually handcraft for the event. Tickets for the 5K are $30 per person or $90 for groups of four or more. Participants must register online at active.com by Thursday, Sept. 19.

All participating pets in the pet parade will receive a treat bag, and prizes will be available for the "Best Dressed, "Most Congenial" and cutest pets. All pets must be on leashes in accordance with city ordinances.

The festival also includes a children's area with games, inflatables, pony rides, mini-golf, face painting, a sand pile and more. There will also be a silent auction for items from local merchants, outdoor grilling, a plant sale, arts-and-crafts vendors, an outdoor coffee house, food trucks and live music all day on two stages.

"The church and the WellsFest committee have done a magnificent job of carrying on the festival and making an impact for social services and nonprofits," White says. "Even after I stepped down from producing the festival and Reverend Tonkel passed away, they've carried on the legacy of what we started and expounded on it. They've raised thousands of dollars a year for charities, and I consider it to be one of the most important annual events in Jackson today."

WellsFest is free and open to the public and is a drug- and alcohol-free event. For more information, call 601-353-0658 or visit wellsfest.org.