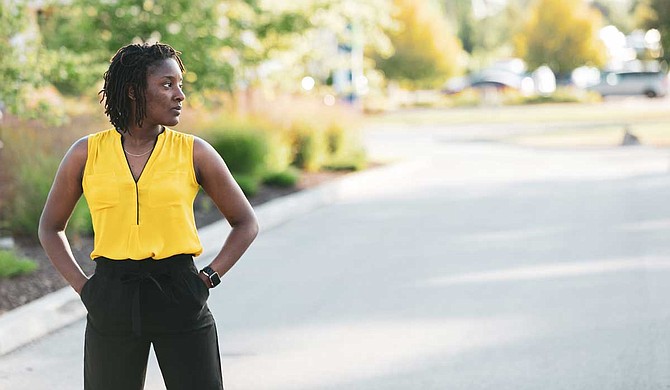 Amber Johnson is the first African American woman to receive a Ph.D. in computer science from Purdue University, which has one of the most respected programs in the United States. Photo by oyinolu

Amber Johnson had long been interested in gadgets and technology.

"I was always taking stuff apart and breaking things, and always wanting the newest and latest gadget," she says. Johnson got her first computer when she was 4 and proceeded to teach her mother, Martha Murrell, how to use it. Her mother then encouraged her to major in computer science in college.

"I didn't really know what it was, but once I looked into it, I realized that this sounded like me," she says.

The Jackson City Council honored Johnson during an Aug. 6, 2019, meeting at city hall after she became the first African American woman to receive a Ph.D. from Purdue University's computer-science department. She graduated on Aug. 3, 2019.

"You have become something so many kids don't believe is possible to become," Councilman Melvin Priester Jr. told Johnson. "I humbly ask you to please stay in touch with the kids from Lanier and find ways to keep being a role model because you are a role model."

Johnson graduated with a GPA in the top 10 of her graduating class and with All-State basketball honors from Lanier High School in 2006. She then attended Tougaloo College on a basketball scholarship, and after two years, she continued her education at LeMoyne-Owen College in Memphis, Tenn., where she received her bachelor's degree in computer science in 2011. She ran cross-country for Tougaloo and LeMoyne-Owen and played some tennis. Johnson received her master's degree in computer science from Jackson State University in 2013.

But she didn't want to stop there. She wanted to take her education further, so she decided to attend Purdue University in West Lafayette, Ind., which has one of the best computer-science programs in the country.

One of the biggest adjustments Johnson had to make in moving to Indiana was the cold weather.

"I realized that I had never owned a real coat until I got to Indiana," she says.

Besides the struggles of moving across the country, Johnson also encountered another issue: She was part of a minority population in the program.

"Purdue itself is kind of a little country all on its own; it is pretty diverse," she says. "There are a lot of international students, but still, there is just a small percentage of black students."

And when Johnson first got there, there were no other black women in her department.

"Grad school was a struggle in itself," she says. "It was very stressful. It could be isolating, and, of course, time-consuming, but there is a lot of growth that comes out of it."

One of the things she liked about the university was when people would ask her to introduce or greet many visiting celebrities who came to speak at Purdue. She got to meet include Margot Lee Shetterly, the author of "Hidden Figures"; Tarana Burke, the creator of the #MeToo movement; Danielle Feinberg, the director of photography for lighting at Pixar; and Reshma Saujani, the founder of Girls Who Code.

But her favorite memory was meeting John Carlos when he came to Purdue to give a talk. He is the black Olympic runner famous for the raised fist during the awards ceremony at the 1968 Olympics.

"I met him at a time when I was really stressed out and down," she says. She told him that she had his Olympic picture as a wallpaper on her phone for motivation. His speech was inspirational, Johnson says, and when he concluded with these words, "just pick up the ball and dribble up the court," she felt like he was speaking directly to her.

A few months later, Carlos' grandson, who also attended Purdue, came by her office to deliver a personalized poster from the Olympian.

"I immediately started bawling," Johnson says. "It was exactly what I needed."

At the beginning of her second year at Purdue, Johnson still hadn't found a topic for her research work. She wanted something that was impactful but was having trouble finding anything that interested her.

One night, she was talking to her ill aunt Ethel Cooper in Jackson, who jokingly suggested Johnson use technology to help her with her illness, chronic obstructive pulmonary disease. Cooper died that night.

About six months later, Johnson, who at the time was researching vehicle communication, was talking to a mentor and got the idea to follow Cooper's suggestion. Johnson used electronic health records to model and simulate the outcomes from a hospital stay of COPD patients. It has the potential to improve the care of those patients and is a tribute to her aunt, Johnson says.

Johnson starts her job as a software engineer for Northrop Grumman this fall, but in the meantime, she is occupying herself with other things. "I have some projects that I want to work on and some things I want to wrap up with my research," she says.

She is launching inspirational apparel line Kidulting in a couple of weeks. She now lives in Maryland and will marry fiance Jeff Avery in May 2020.