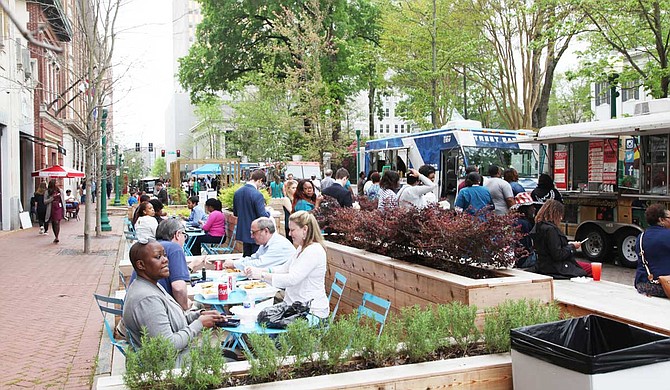 The City of Jackson will host PARK(ing) Day on Friday, Sept. 20. PARK(ing) Day is a national event held the third Friday of September each year. The goal is to bring together businesses and residents to transform metered parking spaces into temporary park installations or community spaces for one day.

Jackson's PARK(ing) Day will take place from 4 p.m. to 9 p.m. near the Congress Street parklet in downtown Jackson. Congress Street between Yazoo and Capitol streets, as well as Amite Street between President and West streets, will be closed for the day. The event will include live music in front of the parking lot of the 200 N. Congress St. building, vendors and temporary parklets lining the street between the stage and Capitol Street, and food trucks along Amite Street near the intersection. Click here to view a map of the event layout.

As part of the event, the City has commissioned a street mural for the road between Yazoo and Amite Streets. On Thursday, Sept. 19, the City will block off Congress Street between Capitol and Yazoo streets beginning at 7 p.m. Amite Street between President and West streets will be blocked off beginning at 10 a.m. the day of the event. All roads will reopen after the event ends.

For more information or to purchase event tickets, go here.

GJAC launched the luncheon in 2017 in partnership with Kickstarter co-founder and Chief Executive Officer Yancey Strickler. The guest for the 2018 event was Piper Kerman, author or "Orange is the New Black."

Gilbert's 1997 article for GQ magazine about her experience working as a bartender on New York's Lower East Side served as the inspiration for the 2000 movie "Coyote Ugly." Her 2006 memoir, "Eat, Pray, Love," spent 199 weeks on the New York Times bestseller list until December 2010 and sold more than 12 million copies. Director Ryan Murphy adapted the book into a movie in 2010. Gilbert also published a self-help book on creativity titled "Big Magic: Creative Living Beyond Fear" in 2015.

Gilbert's latest novel, "City of Girls," is a period drama about the world of theater in 1940s New York City.

Tickets to the event are $75 per person and include lunch. Tickets for the "City of Girls" VIP Experience tickets, which come with premium seating at the luncheon, an autographed hardcover edition of "City of Girls" and seating at a reception with Gilbert in which guests can take photos with her, are also available for $150 per person.

Memphis-based Malco Theatres recently announced that it will renovate the Malco Grandview Cinema in Madison to contain the first IMAX theater in Mississippi. A release from Malco states that the IMAX will open in time for the release of "Star Wars: The Rise of Skywalker" on Dec. 20, 2019.

Malco will also make additional renovations to the Madison theater, including upgrading the concession area into the Malco Cinema Grill with an expanded food and drink menu; installing a new private-event space that includes virtual-reality devices; and luxury recliner seats for all screening rooms.

Wells Fargo Donates $10,000 to Mississippi Alliance of Nonprofits and Philanthropy

Wells Fargo bank recently awarded a $10,000 grant to the Mississippi Alliance of Nonprofits and Philanthropy, an organization that provides leadership and organizational development training to nonprofit and philanthropic organizations in the state.

MANP will use the grant to support management training, technical assistance and additional resources for 12,000 nonprofits across in Mississippi.