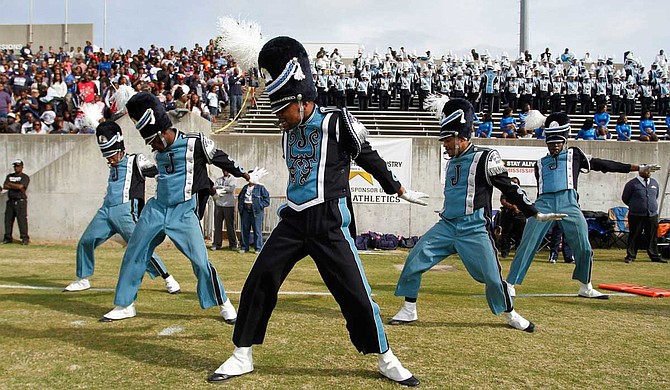 Jackson State University's Sonic Boom of the South Marching Band is one of eight bands competing in the Honda Battle of the Bands, making its ninth appearance at the event. Photo courtesy JSU

More than 1,800 student musicians and dancers from eight college marching bands across the United States will compete in the 17th-annual Honda Battle of the Bands on Jan. 25, 2020, in Atlanta, Ga.

The eight bands participating in the showcase came out of 38 bands that initially chose to participate. Fans voted for their favorite bands, and the four that received the highest number of votes got spots on the lineup. The HBOB committee selected the other four bands.

Honda will award each participating band a $20,000 grant to support their music education program and an all-expenses-paid trip to the showcase.

Jackson State University recently announced that it is selling 134 parcels of surplus properties to surrounding homeowners. The university is selling the properties for around $100 to $1,000, with one selling for only $1, a release from JSU says. JSU has sold 49 properties so far, and 85 more will remain on sale through Dec. 31.

Gov. Phil Bryant signed the legislation earlier this year, and it went into effect on July 1. The Board of Trustees of Mississippi Institutions of Higher Learning approved the sales on Oct. 17.

Potential buyers must be homeowners who live within 0.25 miles of the property they intend to purchase and must provide authenticating documentation. All properties will go back onto the tax roll and will help generate annual revenue for the city of Jackson, the release says.

Combined, the paths provide more than 2.5 miles of pedestrian pathways through high-traffic areas of Starkville, the release says. Locksley Way also features the first two-way cycle track in Mississippi and a stop for the Starkville-MSU Area Rapid Transit system.