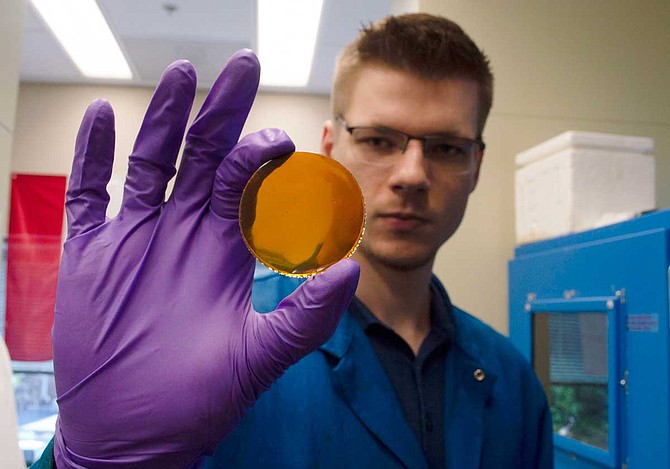 Witold Fuchs, a third-year polymer science doctoral student at the University of Southern Mississippi, is partnering with NASA to design a carbon fiber composite material and test using it to construct hulls for spaceships and satellites. Photo by J'Marcus Alfred/USM

Witold Fuchs, a third-year polymer-science doctoral student at the University of Southern Mississippi, is partnering with NASA to design a carbon fiber composite material and test using it to construct hulls for spaceships and satellites. NASA is planning to launch Fuchs' material into space to test it onboard the International Space Station by June, a press release from USM says.

The International Space Station has been in low Earth orbit 240 miles above the planet's surface since 1998. It has been continuously inhabited since November 2000. USM's release says that NASA will attach samples of Fuchs' material to the space station's exterior for testing. The material will remain there for one or two years to determine if it suffers any degradation while in space.

Fuchs earned his bachelor's degree in biochemistry at the University of Detroit Mercy. He and his team developed their material under the instruction of Jeff Wiggins, director of USM's School of Polymer Science and Engineering. Fuchs spent more than 1,500 hours on the project from fall 2018 to spring 2019, USM's release says.

He is currently working with scientists at NASA's Marshall Space Flight Center in Huntsville, Ala., to prepare the material for launch to the space station. Fuchs will then spend summer 2019 at NASA's Glenn Research Center in Cleveland, Ohio, where he will work with researchers on other new materials for use in space.

ADF launched the program in 2008 to honor colleges and universities that promote tree planting and conservation. MSU has consistently received the designation for having an effective campus forest management plan, establishing a tree advisory committee, planning and carrying out a campus tree-care plan, holding an annual Arbor Day observance and sponsoring student service-learning projects on campus, a press release from the university says.

Bart Prather, MSU's associate director of campus landscape, said in a release that the university has planted approximately 85-100 new trees on its 1,500-acre campus in Starkville. The release also says that the Campus Tree Advisory Committee has planted 40 loblolly pine seedlings that ArborGen, the largest global seedling supplier, donated to the university, and is working to expand the MSU Campus Tree Trail.

For more information on the Arbor Day Foundation and the Tree Campus USA program, visit arborday.org.

Millsaps College recently signed an agreement with the University of Alabama at Birmingham to establish a new dual degree program for Millsaps nursing students. The program will allow participating students to earn both a bachelor's degree and master's degree in nursing in five years, a Millsaps press release says.

Timothy J. Ward, associate dean of research and faculty development, and professor of chemistry at Millsaps, said in the release that students can also choose to pursue additional degrees while working at UAB's University Hospital after completing the program.

Millsaps students will be able to enroll in the dual degree program in the spring of their senior year. During that semester, UAB will admit students into its Accelerated Master's in Nursing Pathways program. Five spots in the program are guaranteed each year for qualified Millsaps students. For more information, visit the UAB website.