Chipper and Coco, Your CBD Store and B&B Theatres at Northpark 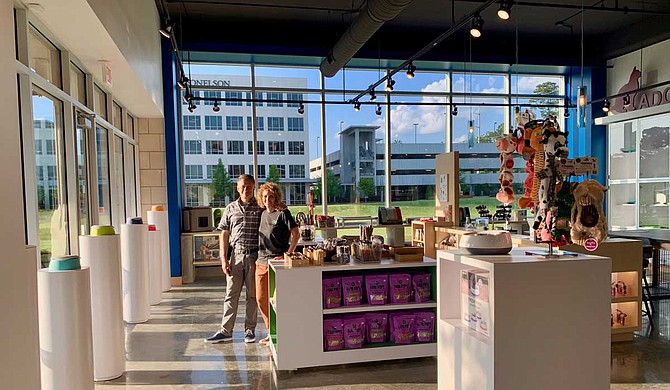 Jackson native Ann Somers and her husband Bob Potesky opened a new pet store called Chipper and Coco at The District at Eastover on Wednesday, May 15, across from Fine & Dandy. Photo courtesy Ann Somers

Jackson native Ann Somers and her husband Bob Potesky opened a new pet store called Chipper and Coco at The District at Eastover (1250 Eastover Drive) on Wednesday, May 15, across from Fine & Dandy.

Chipper and Coco takes its name from two of Somers and Potesky's former pets, a golden retriever named Chipper and a Persian mix cat named Coco.

Other specialty items include raw beef patties from Remington-Lott Farms and Reyer Farms for dogs for a raw food diet, and specialty cakes for dogs from La Brioche Patisserie in Jackson.

Somers says all food products in the store are human-grade quality, which means the Association of American Feed Control Officials deems them as edible for humans. The store's products are also humanely sourced, which includes using free-range chicken for pet food and selling elk antlers for dogs to chew that fell off naturally rather.

Chipper and Coco also partners with Community Animal Rescue and Adoption, or CARA, a no-kill animal shelter in Jackson. Somers is a member of the organization's board, and a portion of proceeds from any purchase goes to the shelter. Chipper and Coco is also has treats from GivePet, a pet food company that donates treats to shelter dogs with any purchase of its products.

"It's important for us that companies we work with have programs that give back to animals shelters," Somers says. "After I retired from my old job as an architect with Cooke Douglass Farr Lemons, I wanted to do something that would help get cats and dogs off the streets, and get them adopted. I felt that opening a pet outlet store was the best way to do that."

Your CBD Store Opens in Jackson

CBD stands for cannabidiol, a chemical extract from cannabis plants. Your CBD Store specializes in hemp oil products including water solubles for drinking, topical creams, gel capsules, pet products and more. None of the products contain tetrahydrocannabinol, the chemical in cannabis that causes psychological effects.

Your CBD Store is headquartered in Tampa, Fla., and has roughly 250 locations nationwide. Freeman received approval to open his Jackson store in November 2018 and plans to open a second location in Vicksburg by July 2019.

"I felt bringing a store like this to Jackson would help to diversify things in the city," Freeman says. "When people asked me 'Why Jackson?' I said 'Why not Jackson?' I felt the city could benefit from a one-of-a-kind store like this. The response since we launched has been huge from people telling all their family and friends about us."

Northpark (1200 E. County Line Road, Ridgeland) announced on Friday, May 17, that it will open a new 14-screen movie theater by fall 2019. B&B Theatres, which has 50 locations nationwide, is partnering with Northpark to open its second location in Mississippi on 250 Ring Road in Ridgeland, which is the road that surrounds Northpark. The other B&B Theatres in Mississippi is at the Vicksburg Mall.

In late 2018, Northpark completed a series of large-scale renovations to its two-story, 958,000-square-foot facility, including changes to the entrances, children's play area, interior and exterior landscaping, common areas and more. For the new theater, Northpark and B&B Theatres will renovate the former Regal Cinema, which closed in January 2019.

A release from Northpark says that the renovations will include changes to the lobby, restrooms and concession area, as well as the installation of new screens, seating, carpeting, countertops and signage. The renovations will also include a new exterior facade and a resurfaced parking lot.

B&B Theatres will include amenities such as the Marquee Bar, a full-service bar with beer, wine or cocktails for guests age 21 or older. The theater will also have a lounge, a made-to-order food menu, auditoriums with electronic heated leather recliners and more.

Christy Pender, marketing and business development manager for Northpark, told the Jackson Free Press that Northpark plans to hold a grand opening celebration after the theater opens but has not yet announced further details. For more information, call 601-863-2300, or visit visitnorthpark.com or bbtheatres.com.