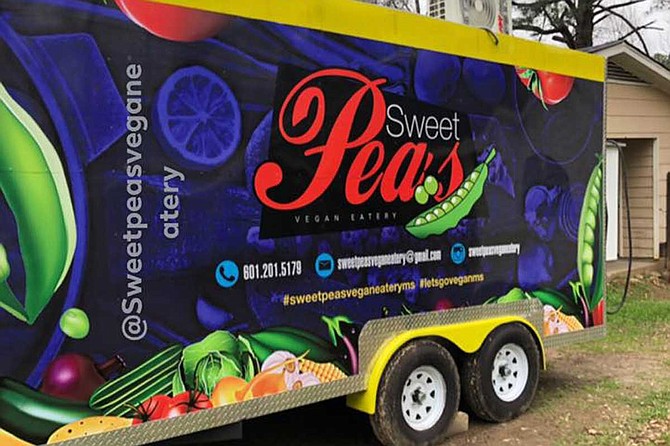 CORRECTION: A previous version of this story contained incorrect details about the Loop program with Bilal's EasyKale. The details of the program have been corrected. We apologize for the error.

Lataurius Rodgers, owner of Diamond Nail Studio in Jackson, will soon bring a new food truck to the city together with Lamarcus Robinson, a friend who also lives in Jackson.

"I started talking to Lamarcus about how there was a lack of good vegan places in Jackson back in February 2018, and that led to us deciding to start one ourselves," Rodgers says. "We thought it would be daunting to find a building to set up a restaurant in, and we didn't know where to start, so we ultimately decided that a food truck would be easier."

Rodgers moved to Jackson from McComb in 2013. She lives in the Fondren neighborhood with her three daughters, Alayla, Talia and Cameryn, and her son, Denarius.

"I decided to go vegan because I became more and more health-conscious over the years while raising my children," Rodgers says. "I've also loved cooking ever since I got my first job working for my uncle, Charles Smith, at a restaurant he owns called Southern Kitchen in McComb back in 2001."

In addition to working at her uncle's restaurant, Rodgers also worked at a bakery called Sweet Peas in McComb that friend Catherine Hilderson owned. The bakery closed around 2009. When Rodgers decided to open her food truck, she named it after Hilderson's bakery.

"When it comes to running Sweet Peas, I want to do it with the same dedication to fresh food and hard work put into every dish that Catherine had when she was running her bakery," Rodgers says.

Rodgers plans to open Sweet Peas by the end of March this year. The food truck will operate in Fondren on the corner of Meadowbrook Road and Northview Drive, across from Trustmark Bank.

Jon Lansdale, owner of Crazy Cat Eat Up (1491 Canton Mart Road), recently purchased the lease for Cookin' Up a Storm, another restaurant in Canton Mart Square, after it closed on Dec. 24, 2018.

Lansdale told the Jackson Free Press that the new business will have a different name from Crazy Cat, though he has not decided it yet as of press time. He is currently renovating the 1,200-square-foot space and plans to open the new restaurant around June 2019.

The new restaurant will be takeout only and will have a menu of pre-prepared meals intended for groups. The menu will include Crazy Cat staples such as casseroles, chicken pot pie, chicken spaghetti, meatloaf, sausage and grits, red beans and rice, pecan pie, key lime pie and more, as well as exclusive menu items and a fall tailgating menu.

"Opening this new location will help to broaden the scope of what we do here at Crazy Cat," Lansdale told the Jackson Free Press. "This bulk takeout approach will fill a need in northeast Jackson for people looking to pick up a nice meal for their family."

"I wanted to hold our grand opening at Innovate to highlight how critical innovation is for Mississippi and how helpful the organization has been to our growth," Qizilbash says. "Rich Sun has been a tremendous help in everything from getting us investments, helping to determine a price point for our product and getting us our certified USDA organic status."

Bilal's EasyKale focuses on research and development of kale products such as its namesake product, which is made from dehydrated and powdered kale through a special process that Qizilbash says preserves the nutritional quality while minimizing kale's bitter flavor profile.

EasyKale comes in 1.5-ounce shakers that are $14.99 each. Qizilbash told the Jackson Free Press that the company is also developing cost-friendly bags of EasyKale that customers can use to refill their shakers, as well as single-serving packets of the kale powder for use on the go.

"One teaspoon of EasyKale is equal to one cup of kale," Qizilbash told the Jackson Free Press. "The powder is relatively tasteless, which is great because a lot of kids don't like the taste and texture of kale. This way, parents can put EasyKale in something like spaghetti to easily give their kids their daily helping of vegetables. The powder also has a long shelf life of up to two years."

Bilal's EasyKale will also join recycling company Terracycle's Loop program this summer, which will allow customers to purchase special reusable shakers that they can send back in to Loop via UPS for refills rather than throwing out empty containers. For more information on the Loop program, visit terracycle.com or loopstore.com.

For more information or to purchase EasyKale, visit easykale.com. The product is also available at local businesses such as Aladdin Mediterranean Grill, The Farmer's Table, Foot Print Farms and the Mississippi Farmer's Market.