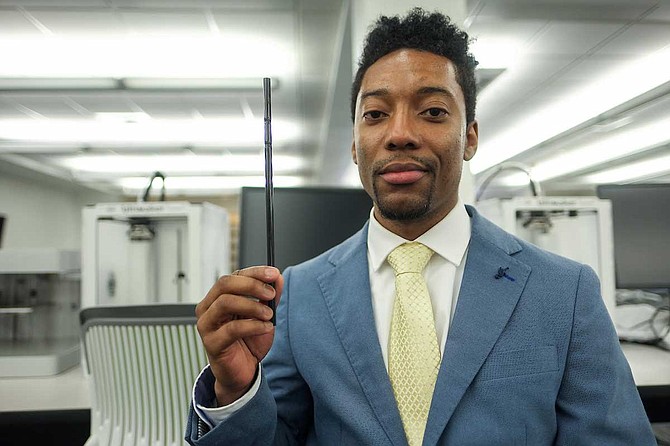 LaMonté Pierce, a graduate student at Jackson State University who is majoring in technology education, recently secured a patent for a special straw that he dubbed the “Cleanstraww,” which filters lead and other contaminants from water a person drinks through it. Photo by Charles A. Smith/JSU

LaMonté Pierce, a graduate student at Jackson State University who is majoring in technology education, recently secured a patent for a special straw that he dubbed the “Cleanstraww,” which filters lead and other contaminants from water a person drinks through it.

A release from JSU states that Pierce decided to invent the product in light of the city of Jackson’s frequent boil-water notices. During the straw’s development, Pierce also created a company called Cleanstraww, LLC, and created a website, cleanstraww.com.

Pierce is also working on an app to calculate a particular straw’s expiration date based on information a user enters into the app, such as the date, the SKU number of the straw and amount of water consumed through it. Each straw can handle filtering around 20 gallons of water over the course of a month, the release says.

Retailer Walmart has since offered Pierce a vendor contract to distribute boxes of the products at 4,000 of its stores, with each containing 10-12 straws. Pierce is currently working with a nonprofit to brand the product and is seeking other funding to bring it to market.

Pierce earned his bachelor’s degree in industrial technology from JSU in 2017 and currently works full-time in the IT department at Jackson Public Schools as a network analyst. He partnered with Andrew Willis, a JSU alum who studied marketing, finance and entrepreneurship, to develop the Cleanstraww as part of a 3D-printing challenge at a cyberlearning summit on the JSU campus.

In September 2019, Pierce will attend the National Science Foundation’s Legionella Conference in Los Angeles, which focuses on energy sustainability, public health and other issues related to building water systems.

The Mississippi Development Authority recently gave a $6,000 grant to Mississippi State University to support the annual Horse Poor Barrel Race at the Mississippi Horse Park (869 E. Poor House Road, Starkville), a 100-acre facility that hosts equine events and competitions. MSU will use the grant funds for advertising, staff and equipment for the 2020 barrel race, which will take place in June. The university manages the park, which opened in 1999, as part of a partnership with the city of Starkville and Oktibbeha County.

The Horse Poor Barrel Race is one of the largest events the Horse Park hosts in-house, a release from MSU says. The event, which takes its name from the venue’s location on Poor House Road, is a timed race in which a horse and rider run around a set of three barrels. This year’s event has $25,000 in total prize money available, with winning riders’ individual earnings based on a combination of speed and precision in maneuvering.

MSU’s Horse Park is located south of the main campus and hosts around 48 events per year, bringing roughly 60,000 people to Starkville annually, the release says. The venue also offers RV parking during football season. The park will begin accepting reservations for that on July 10.

On Sept. 6, 2019, the Horse Park will celebrate its 20th anniversary with a community breakfast and a series of live broadcasts on SuperTalk Mississippi.

The 2019 Horse Poor Barrel Race will take place from June 28-30, and is free and open to the public. For more information on the race or the park, visit mshorsepark.com/events/horse-poor.

NCAA Division III includes athletic programs at colleges and universities that do not offer athletic scholarships to their student-athletes. Division III is the largest division in the association, containing more than 450 member institutions around the U.S.

With the membership approval, the Belhaven Blazers' 17 sports programs can now participate in the American Southwest Conference and NCAA postseason championships. The university will also have full NCAA member voting privileges and is eligible to receive NCAA awards and recognitions.

The Belhaven University Board of Trustees began the NCAA membership process in 2013. The college then became a provisional member between 2015 and 2019. Belhaven also became an ASC member in 2015, but could not participate in conference team championship games as an NCAA provisional member, a release from the university says. Belhaven student-athletes were able to participate in ASC championships in individual sports, which are ones such as tennis or wrestling where participants do not compete as a team.