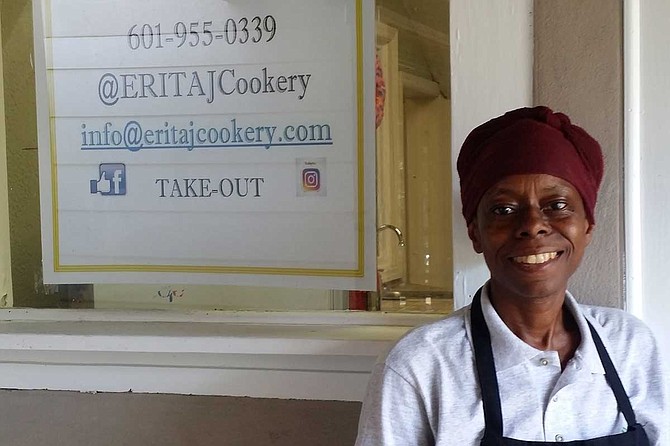 "Eritaj" means "inheritance" in Haitian Creole, which Bell says refers to the legacy of farming she inherited from her family. Bell's family has owned and worked farmland in Brandon for five generations, and she inherited the land RD&S farm now occupies from her grandfather, R.D. Burnett, in 1992.

"Farming is a skill you have to learn over a long time, and my family has spent our time practicing traditional, non-chemical-reliant farming methods," Bell says. "I also inherited the knowledge I have of how herbs can benefit your body and the culinary aspects of using them in cooking from my family."

Eritaj, which has vegan and vegetarian food, is open for breakfast and lunch on Monday, Thursday and Friday. The breakfast menu includes avocado toast, vegan donuts, homemade herb-infused biscuits, wraps and egg-scramble dishes that will change weekly.

For lunch, Bell serves what she calls "one-pot wonders," which are dishes cooked in a crock pot. The lunch menu will include three items each month, with the menu changing at the end of each month. One of the three dishes of the month will be available per day. Lunch is also completely dairy-free, Bell says, and can include dishes such as quinoa enchiladas, chunky potato soup, lasagna and more.

"Cooking in a crock pot is an inexpensive way to cook that keeps all the nutrients in one place," Bell says. "It's a fulfilling way to cook nutrient-dense food that's perfect for big families. It has helped me so much, and I wanted to share that with the people of Jackson."

"I opened this cookery to share the restorative benefits of food with everyone," Bell says. "Quality, healthy food is a way of restoring both the body and a person's health."

Northpark launched a summer movie matinee series called "Popcorn in the 'Park" on Tuesday, June 4. The event will take place every Tuesday at 10 a.m. through July 30. Northpark will screen the movies on its 22-foot-by-14-foot media wall inside the mall's Eatery. The movies are free and open to the public.

"Popcorn in the 'Park" opened with a screening of Disney's "Finding Dory." Other scheduled films include "Captain Marvel," "The Lego Batman Movie," "Moana," "Mary Poppins Returns," "How to Train Your Dragon 2," "Christopher Robin," "The BFG" and "Zootopia." Screenings will also include activities, games, popcorn and more.

Customers can bring their receipts to the Northpark management office Monday through Friday from 10 a.m. to 5 p.m. to receive movie passes, or present them before entering a screening. For more information on shows or movie passes, find the event on Facebook.

The Housing Visionary Awards Gala honors organizations that have made significant contributions to advance affordable housing in the U.S.

"The Housing Visionary Award is something that looks back on a long track record of work, which for us has spanned 20 years," Ed Sivak, executive vice president of policy and communications at Hope Enterprise, told the Jackson Free Press. "Home ownership is critical for economic mobility, stabilizing communities and improving outcomes in areas like health and education, and we've spent these 20 years working to make a deep impact in the South."

Hope Enterprise opened in Jackson in 1994. In 2000, the company launched a mortgage program that has provided more than $300 million in financing for affordable housing.

After Hurricane Katrina hit in 2005, Hope launched the "Home Again" program to construct some of the first new homes on the Mississippi coast and assist more than 9,000 homeowners displaced after the storm.

Hope has also financed more than 6,000 homes and affordable housing units. In 2018, the company began working to renovate 44 homes in Eastmoor Estates, a housing development built in the 1970s outside Moorhead, Miss.

"We fixed problems like bad foundations and open sewage around the houses, and also worked to provide jobs for the residents of Eastmoor," Sivak says. "We also ran programs to help teach the locals to build and repair houses so we could help them to help others in the future."