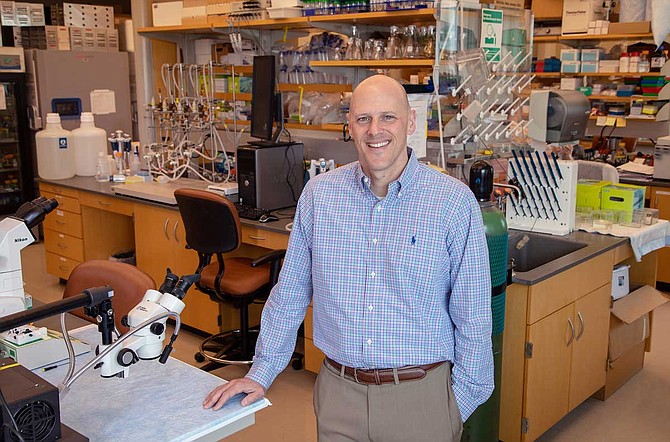 Michael Ryan, a professor of physiology and biophysics at the University of Mississippi Medical Center, received the Regions Bank TEACH Prize in May 2019. The prize, which comes with a $10,000 award, coincides with the university's annual Nelson Order ceremony, which Ryan describes as an "honor society" for top teachers at UMMC.

Students nominate 21 inductees for the Nelson Order from each of UMMC's seven schools, and a committee of administrators, faculty and students then name one representative from each school in the order as finalists for the TEACH award, or Toward Educational Advancement in Care and Health.

Ryan, who represents the School of Graduate Studies in the Health Sciences in the Nelson Order, focuses his research on how the immune system affects hypertension, or high blood pressure. He also studies the risks of stroke or seizure that come from conditions such as preeclampsia, a pregnancy disorder in which women develop high blood pressure.

"Learning how the human body works and how that applies to health and disease was one of the strongest things that drew me to my field," Ryan says. "It's important to know why things go wrong in the body and why we have diseases, and I work to discover answers to all those things. Even now there's so much we don't know about what causes blood pressure to go up in a lot of patients, even with medication."

Ryan, 46, was born in Albany, N.Y., and graduated from Albany High School before attending Cortland College, which is part of the State University of New York, a system of 64 college and universities across the state. He graduated in 1994 with a bachelor's degree in biological sciences and went on to the University at Buffalo, which is also part of SUNY. He received a PhD in physiology and biophysics there in 1999 and went to the University of Iowa in Iowa City, Iowa, for his post-doctoral fellowship, which he completed in 2004.

After he graduated from UI, UMMC offered Ryan a faculty position as an assistant professor of physiology and biophysics. He accepted the job and moved to Brandon that same year.

"UMMC has an outstanding reputation for its physiology department, so when they offered me a job I was happy to come to Jackson and take it," Ryan says. "What I love most about UMMC, though, is the interaction I get with students and trainees. The faculty here is responsible for training the next generation of scientists, and that's something I greatly enjoy being able to do."

In addition to serving as a physiology and biophysics professor at UMMC, Ryan is director of graduate studies and oversees recruitment and curriculums for the department. He is also the associate dean for both the graduate studies and student affairs departments, and gives lectures for graduate courses in endocrinology to medical students, or the study of hormones and how they affect bodily functions, and renal physiology, which concerns kidney functions.

The Mississippi Institutions of Higher Learning named Ryan the Diversity Educator of the Year in February 2019 for his efforts to increase diversity and inclusion in UMMC's biomedical sciences programs, as well as his leadership in the university's student outreach programs.

"I consider myself fortunate to have gained these leadership positions because they have given me the opportunity to help underserved minorities get involved in the sciences," Ryan says. "I love being able to teach kids from any background."

Ryan also oversees two community events at the Mississippi Children's Museum. The first, Physiology Understanding, or PhUn, Day, takes place in November each year and is part of a larger national event that the American Physiological Society sponsors. Ryan and other physiologists from UMMC and institutions around the state set up physiology-themed exhibits at the Children's Museum, including activities such as testing heart rate and lung capacity or learning about the digestive system.

The second event, "Discover U," takes place in either March or April. For the exhibit, representatives of the different programs in UMMC's School of Graduate Studies work together with students to design activities that represent each program.