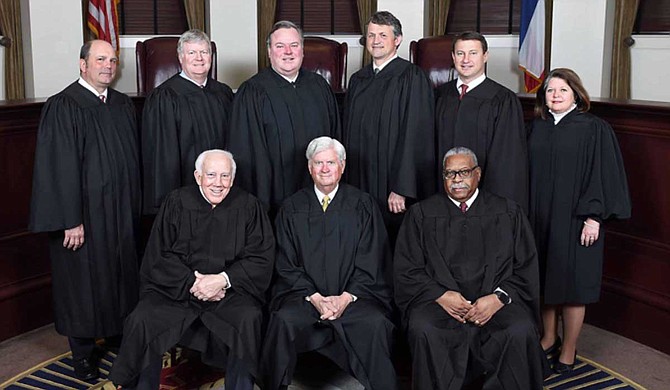 Mississippi's Supreme Court adopted new rules of criminal procedure two years ago that could have changed this. Some parts of the new rules seem to be working. For example, it's become common for justice and municipal courts to hold hearings on Sundays, honoring the Supreme Court's demand that anyone arrested see a judge within 48 hours, even if it's on a weekend. Photo courtesy Mississippi Supreme Court

The data's quality, admittedly, is still poor. The center says some counties are reporting only inmates held more than 90 days, and that reporting from county to county is inconsistent. Some lawmakers tried unsuccessfully to get a bill passed earlier this year to mandate standardized statewide reporting.

But in the center's third attempt at counting inmates, the old patterns are still clear. Inmates who face even relatively low bails can get stuck in jail for more than a year before trial. Take, for example, Brian Sanford, who had been in the Lamar County jail for 293 days as of April 14. He was charged at the time with possession of a controlled substance and attempted grand larceny, with the county demanding an $11,500 bond to release him. That means, generally, that someone would have to pay $1,150 to a bonding agency for Sanford to make bail.

There are plenty of other cases — the report is available at https://www.msjaildata.com/ .

Mississippi's Supreme Court adopted new rules of criminal procedure two years ago that could have changed this.

Some parts of the new rules seem to be working. For example, it's become common for justice and municipal courts to hold hearings on Sundays, honoring the Supreme Court's demand that anyone arrested see a judge within 48 hours, even if it's on a weekend.

The rules also say "a defendant should be released pending trial whenever possible" and that judges may release indigent defendants "on non-financial conditions that make it reasonably likely that the defendant will appear." But when judges see defendants, many still always require bail.

Cliff Johnson, the director of the MacArthur Center, says that what he calls "unlawful automatic money bail" long ago became accepted practice in Mississippi. He and others have successfully sued multiple jurisdictions to force them to release people who can't afford bail. But it's a one-at-a-time venture in a state with 82 counties and about 300 cities and towns.

It doesn't help that the state hasn't fixed its public defender system, where jail inmates often go unrepresented until they're indicted, and sometimes even then have trouble getting a lawyer's attention. Lawyers could ask judges to lower bail.

But it's deeper than that.

Johnson ultimately has an uphill battle against entrenched beliefs about the criminal justice system. It's clear that many Mississippians believe that once people are arrested by police, they deserve to stay in jail until charges are resolved, especially when they're accused of a serious crime. While defendants are legally presumed innocent until proven guilty, popular opinion clearly runs in the other direction.

Witness the eruption in Oxford in May when prosecutors discussed setting bail for a police officer accused of killing a woman. Family members angrily spilled out into the Oxford square and the police chief issued a statement saying the officer "needs to be in jail." Two days later, a judge denied bail.

Johnson said that fear of public opinion is part of the reason judges haven't changed their bail practices.

"Judges are afraid that if a defendant released without paying money bail does something bad, the judge who released that person will be voted out of office," Johnson said.