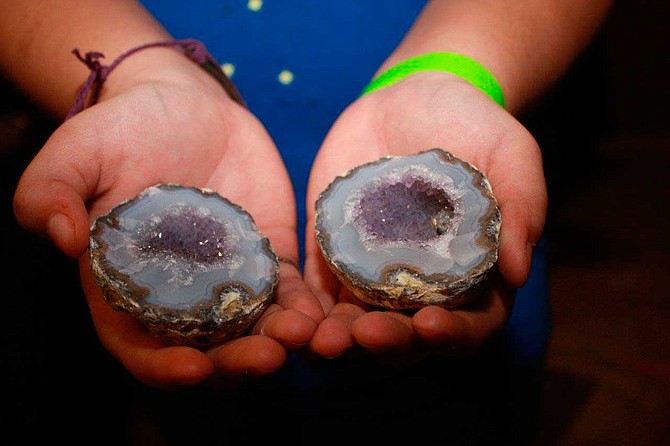 The show will include museum displays, crafting and learning activities for children, and booths selling fossils, gems, minerals, geodes, carvings, books, jewelry and more. About two dozen vendors will be at the show, including representatives of the Mississippi Petrified Forest in Flora and the Geode Gallery of Davenport, Iowa.

Jeff McCraw, owner of The Artifact Shack in Sylvarena, Miss., will display his collection of Native American artifacts at the show.

The event will also feature demonstrations of flint-knapping techniques once used to craft arrowheads and other stone tools, as well as jewelry-crafting techniques such as beading, wire wrapping and gem faceting.

Maurice R. Robinson, founder of New York City-based publishing and media company Scholastic, Inc., established the Scholastic Art & Writing Awards in 1923. The competition is open to students in grades seven through 12. The Mississippi Museum of Art has overseen the art component of the Mississippi regional competition for more than 60 years.

The Mississippi Museum of Art is hosting an exhibition featuring the works of the Gold Key and Silver Key winners in The Gertrude C. Ford Galleries for the Permanent Collection. The exhibit opened on Saturday, Feb. 9, and will remain on display through Sunday, March 24. A gallery of honorable mention recipients' works is available on the museum's website. The museum will also hold a ceremony and reception for the artists and their teachers on Sunday, March 24, at 2 p.m.

William "Billy" Kistler, executive chef at Reunion Golf & Country Club (150 Greensward Dr., Madison), recently announced the addition of two Jackson chefs to the culinary team of the club's fine dining restaurant, Kristie's, and its casual dining restaurant, Ella Jane's Pizza Pub. Tho H. Nguyen will be the sous chef for Kristie's, and Rick Traylor will be the sous chef for Ella Jane's.

Nguyen emigrated to Orange County, Calif., with his family from Vietnam in 1979. He learned to cook from his mother, and received his degree in culinary arts and nutrition from California Culinary Academy in San Francisco. He moved to Mississippi from California in 2001 to join the culinary team at Bonefish Grill in Madison. He has also served as executive sous chef and chef de cuisine at Jackson restaurants such as Walkers Drive In and Parlor Market.

Traylor grew up in the Mississippi Delta and also learned to cook from his family at a young age. He traveled the United States preparing his Lebanese-inspired dishes in places such as Nashville, Glacier National Park, Mont., Lake Tahoe, Calif., and Columbus, Ohio. He eventually returned to Mississippi and began working with James Beard award-winning chefs John Currence and Vishwesh Bhatt of City Grocery Restaurant Group in Oxford. Traylor has also worked as a chef at Parlor Market and the Country Club Of Jackson.