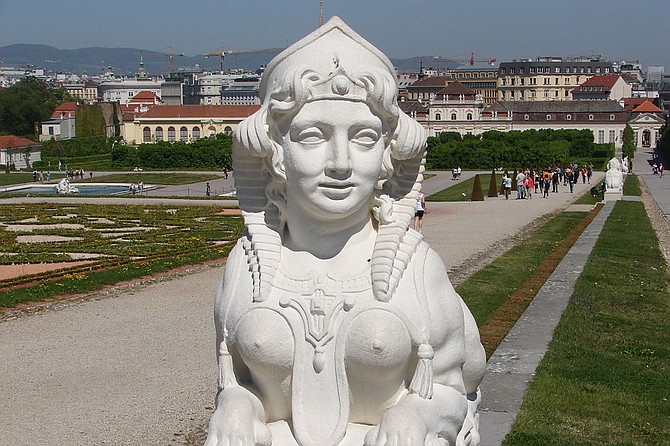 Columnist Richard Coupe had a merry romp, and kind help from a connected Austrian, to get to Vienna on time. Photo by Richard Coupe

My head jerked up from my book when the car registered in my peripheral vision. It had drifted from its lane and was now only inches from the bus in which I was riding, and in seconds we would collide. I stared helplessly as it crept closer.

I was on my way to Austria for the largest scientific conference in Europe, and the first part of the trip was by bus from Strasbourg, France, to Frankfurt, Germany, and then by plane from Frankfurt to Vienna. The Lufthansa bus was large and spacious and equipped with a lavatory and was almost completely full.

One of the last to board in Strasbourg was the young man next to me. By nature, those of us traveling alone had sat down next to the window and piled all our belongings on the aisle seat in hopes of having the two seats to ourselves for the duration. The good-looking slim young man had wandered the length of the bus looking for a welcome, and on his second pass I met his eye and moved my stuff from the aisle seat. He smiled, nodded his thanks, and sat down next to me. He was some sort of business student as best I could tell by reading the German text he studied during the trip.

During the bus ride, I suddenly noticed an older boxy white or gray sedan with a vaguely Eastern European look slowly drifting toward us when the driver of the car—whom I couldn't see from my higher seat in the bus—suddenly woke up, or finished texting, or swallowed the last bit of hamburger, or whatever the distraction as the car suddenly veered violently away from the bus.

As I watched it careen across its lane and the next and onto the far shoulder headed toward the concrete barrier, the detached part of my mind was calculating angles and figured it would strike us on the rebound just about where I was sitting about three-fourths of the way back along the length of the bus. The car then slammed into the concrete barrier and then rebounded with equal force back across the lanes toward the bus. And sure enough, the car hit the side of the bus just below where I was sitting (a little high-five in my head). There was much screaming and consternation, standing and pointing out the back window.

The bus wasn't injured—it was a Mercedes after all—and although the collision made quite a racket, it really was just a glancing blow on the side of the bus. But we had to sit on the side of the road waiting for the police to finish their investigation. It seemed difficult to believe that I could make my flight; I probably faced an afternoon and evening in the airport. A depressing thought to say the least!

But 45 minutes later we were on our way, and it seemed just possible, maybe, if the moon and stars aligned just right, that I would make my flight.

It had been more than 40 years since I had been to the Frankfurt airport and it was big then, but my current hopes disappeared when I saw just how large it is now. There was no way that I could make my plane.

But as we got out of the bus I mentioned to my seatmate that I was going to Vienna, and I didn't think I'd make the flight. Surprisingly, he spoke a slightly accented English very well and said that he was going to Vienna, where he's from, and told me to stay with him, and we'd make it.

So he led me on a merry romp through the airport. We didn't get in any lines. He talked us through the special security lines, always waiting for me before moving onto the next leg, and then we used the first-class baggage check as no one was in that line.

But then the marathon came! We had 10 minutes to get to Gate 40 out of 42, and we were at No. 1. My friend, probably middle 20s and fit, took off running. I tried to keep up, but being in my 60s and slightly less fit, it was no match. He kept stopping and waiting for me, with a worried look on his face. Finally out of breath at Gate 35, I waved him on, and he was quickly lost in the crowd. I limped the rest of the way hoping against hope that the flight might have been delayed.

But, I was crushed when I rounded the corner and saw no people queued or waiting to queue or milling about at Gate 40 and no ticket agent at the podium. Nothing. A few steps more, and wait, there he was, personally holding the gate for me. (Who was he?) He had even talked them into giving him my boarding card. We boarded, and I thanked him and didn't see him again or get his name.

It was completely random act of kindness on his part. I love this world sometimes.

Freelance writer Richard Coupe is a father of 4, the father-in-law of 1, a Francophile and a referee extraordinaire. He writes regular columns for the Jackson Free Press.