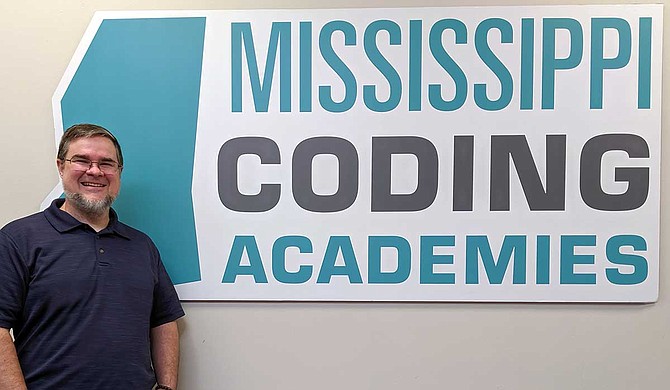 Jackson resident Bryce Mullican has served as a coding instructor for the Mississippi Coding Academies' Jackson site since June 2018 after Innovate Mississippi launched the academy in October 2017.

MCA is a free 11-month program that trains recent high-school graduates and college students to become full-stack coders, or those who have enough functional knowledge and skill to take a computing project from start to finish.

As the lead coding instructor for the Jackson location of the program, Mullican designs the curriculum students follow, including instruction on visual coding programs such as HTML, CSS and JavaScript, programming languages like SQL and website- and application-creation programs such as React.

"I walk the students through all the concepts they need to know, but here at the Coding Academies, it's less of a collegiate experience and much more hands-on," Mullican says. "I'd say it's about a 30/70 split between lectures and hands-on learning, with the students spending mornings writing code while I review the material as they go and keep them focused on what they need to know to do all the actual work of coding."

Mullican was born in Hattiesburg and graduated from the now-closed All Saints Episcopal School in Vicksburg. His father, Larry Mullican, worked as a theater professor at the University of Southern Mississippi for 38 years, while his mother, Megan Mullican, taught students with hearing impairments in Hattiesburg before becoming an audiologist at the Hattiesburg Clinic. Bryce Mullican's wife Rebecca was a special-education teacher for the Madison County School District until she completed her Ph.D. in special education in 2012 and opened the Jackson Autism Center the same year.

"Growing up surrounded by educators my whole life, I came to love teaching, and I think that also played a strong part in my decision to teach at the Coding Academies eventually," Mullican says.

Mullican received a bachelor's degree in advertising from USM in 2001 and spent about two years working for newspapers including The Advertiser News, The Lamar News and The Petal News before moving to Jackson in 2003 and spending a year working Rankin County News, where he transitioned the company from using paper layout to digital layouts. He next spent about five years working as a graphic artist for LogoStoreUSA, a Jackson-based promotional products company, where he primarily created company logos and T-shirt designs. While there, he also began teaching himself to code in order to help build the company's website and intranet system, or a private network accessible to only the organization's staff..

In 2009, Mullican took a job as a web developer at the Mad Genius advertising agency in Ridgeland, where he built and developed websites for other companies and served as the company's primary developer until 2012 and became senior web developer in 2016. Rich Sun, one of the founders of the Mississippi Coding Academies, offered Mullican an instructor position in 2018.

"Over the past year my experiences here, like most things, have had ups and downs," Mullican says. "However, I feel like I've been fortunate to get to work with such great students and make an impact on their lives by giving them the opportunity to get involved in the tech and development field."

For more information about the Mississippi Coding Academies, visit mscoding.org.