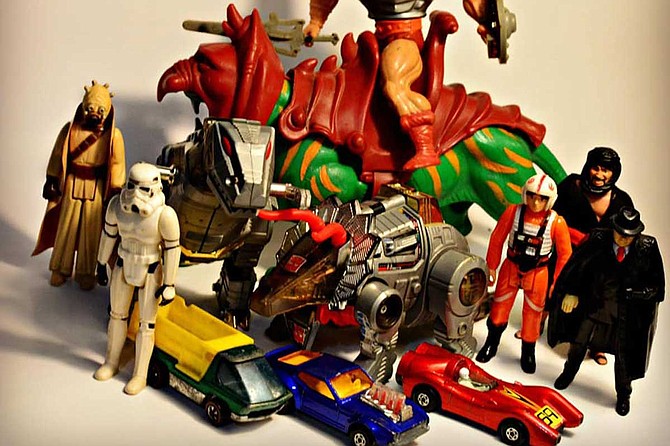 Neal Bumpus, a Brandon resident who works at Capital Ortho in Flowood, told the Jackson Free Press he has been collecting vintage toys for more than 20 years. He founded Mom's Trash Can in June 2018 after he and fellow collector Lowell Poe met at a Hot Wheels collector's event that toy manufacturer Mattel hosted at the Flowood Target store. The group, which Bumpus says currently has around 325 members, has been hosting swap meets at K&W Garage (842 S. Commerce St.) in Jackson, which Poe's son, Kevin Poe, owns.

Bumpus says his group's name is a reference to people who had a large collection of toys as a child and later found that their mothers either gave the items away or threw them out after they moved out or went off to college.

"The market for these kinds of items now is in part driven by people who are wanting to find the things they had in the '70s or the '80s but found that they'd been thrown away," Bumpus says. "We have events like Mississippi Comic Con and the Mississippi Anime Festival, but nobody was hosting any kind of pop-culture vintage-toy shows around here, and we wanted to change that."

The Mom's Trash Can Toy & Collectibles Super Show is free to attend. The Heritage Baptist Church youth group will provide nachos, popcorn and other concessions during the show, and the organizers will hold door-prize drawings every half hour. For more information, call 601-580-7499, email [email protected] or find the event on Facebook.

On Tuesday, Aug. 6, the Jackson Hinds Library System will take part in the statewide Snapshot Day initiative at all 14 of its libraries in Jackson and Hinds County. During the event, library staff will take photos of visitors and children visiting the libraries and taking part in special activities for the day, then upload the photos to the Mississippi Library System website as a way to showcase what libraries are doing to help the state, says JHLS Executive Director Patty Furr.

Each library will also have photo booths for families and other visitors to create their own custom photos and will hold coloring contests for children. JHLS will also conduct a poll throughout the day on visitors' favorite Mississippi-native authors, such as William Faulkner and Tennessee Williams.

Through Aug. 24, JHLS is also holding a back to school "Clear Your Card Sale," where anyone with an overdue or lost book book fine, which restricts the use of a library card, can come in and pay half of it. Afterward, the library will waive the remainder and restore use of the card. The offer does not cover the $10 fee if a fine has gone to collections, which happens when a fine has been due for more than three months.

"We want to help all kids get their card accounts cleared so they can come in and be able to use the library to do well in school," Furr says. "We have so many things like Accelerated Reader programs in Jackson Public Schools that make use of our books, and kids can also take practice quizzes on library computers. We want every child to have access to all the materials they need to succeed."

For more information, visit jhlibrary.org or the JHLS Facebook page.

The North Mississippi Angel Fund, which Innovate Mississippi launched in May 2019 to connect startup companies in central Mississippi with local investors, gave Jackson-based virtual-reality firm Lobaki, Inc. the first $500,000 of a $2-million investment on July 19.

Vince Jordan cofounded Lobaki in 2016 with his son, Josiah. The company specializes in creating 3D virtual-reality and augmented-reality software and hardware that can provide training experiences for people in fields such as health care or education, Jordan told the Jackson Free Press.

In 2018, Jordan opened the Lobaki VR Academy in downtown Jackson, which offers courses in VR programming and coding such as set and level design, digital modeling, animation, lighting, sound, character creation and more.

Lobaki is working with the University of Mississippi Medical Center to develop a VR simulation program for medical students to train in concussion treatment that for injured athletes, which Jordan says the hospital should begin using this month. Lobaki is also developing a pilot program for Entergy Mississippi that will allow utility workers to use a VR headset to train for dangerous activities such as dealing with hanging power lines.

"Our VR technology allows you to do in a headset what you would normally be required to go out in the field to do and serves as a much safer environment," Jordan says. "We greatly appreciate (Innovate Mississippi's) confidence in what we're doing here with a field that is still upcoming but growing very quickly."

Jordan and his son operate a nonprofit called the Lobaki Foundation and the Lobaki XR Academies, which teaches students to use VR software to create virtual objects and worlds.

For more information about Innovate Mississippi and the Angel Fund, visit innovate.ms. For information on Lobaki, visit lobaki.com.