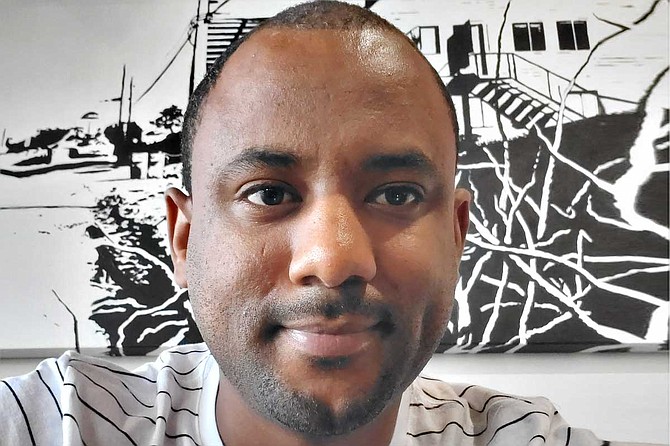 Shiro is open for both breakfast and lunch. For breakfast, the restaurant has savory crepes including grilled chicken, ham and egg with cheese, as well as sweet crepes such as jam, Nutella and banana, and apple delight with banana. The breakfast menu also includes ful medames, a Middle Eastern and African dish made with yogurt, eggs, fava beans and other ingredients.

For lunch, the restaurant offers a make-your-own-plate special for $10. Customers first choose a base such as rice, tortillas or teff bread, along with one protein and two sides. Proteins include tofu, grilled chicken, lamb or beef. Sides include beetroot or cabbage potatoes, spicy lentils, kale or collard greens, turmeric chickpeas and turmeric peas. Customers can also add an extra protein or an extra side for $2 each.

Tilahun immigrated to the United States from Adis Abbaba, Ethiopia, in 2010. He lived in the greater Washington, D.C., metropolitan area until he moved to Jackson in 2018 to work as a software engineer for Blue Cross Blue Shield Mississippi. Shortly after he moved to Jackson, a friend introduced him to Ali.

"Yosef was one of the first people I came to know here in Jackson," Tilahun says. "I heard about how successful he is in running his restaurant, so I told him about my passion to open a restaurant myself, and he was happy to help. I grew up cooking all my life, and I also watch what I eat and study nutrition. For me, cooking is not only business, but a personal and health endeavor as well."

Mississippi Business Journal named Roderick Red, a filmmaker and producer, and owner of Red Squared Productions, LLC (140 Wesley Ave.) in Jackson, to its Top 50 Under 40 business owners list during a ceremony at the Old Capitol Inn on Thursday, April 25. Red's friend Ryder Taff, a financial adviser and consultant, nominated him for the award.

Red, a lifelong Jackson native, went to Murrah High School and earned a bachelor's degree in broadcast production from the University of Southern Mississippi in 2011. He started Red Squared Productions in 2012. The company makes videos for companies, nonprofits and individuals in Jackson, and beyond. Red Squared also makes commercials and documentaries for local nonprofits and businesses.

His company has also worked on projects such as film features for the Mississippi Health Advocacy Program and Springboard to Opportunities, as well as a promotional video for the City of Jackson and a commercial for Entergy Mississippi.

Red told the Jackson Free Press that he believes MBJ chose him for the list primarily for his work in building up his company.

"I've been at this for around seven years doing lots of work around Jackson and Mississippi," Red says. "I've been working at being the best entrepreneur I can be to grow Red Squared and make it successful. To make that happen lately, I've been procuring some big contracts with the City of Jackson."

One of the most recent projects Red has taken up with the City is for "Fertile Ground," a public-art project designed to inspire dialogue about food access in Jackson. The City launched the project after receiving a $1 million grant from Bloomberg Philanthropies in 2018.

Officials contracted Red Squared Productions to produce a documentary about what the City is doing for the project. The documentary will air at Fertile Ground's conclusion in May 2020, when the city will unveil art installations in downtown Jackson, the Virden Addition and the Jackson Medical Mall district.

"FLEET brings together anybody who is creative, from web site developers and filmmakers to graphic designers," Red says. "Our purpose is to connect local creative professionals, educate them and equip them through workshops and training."

Red has also been the president of the Business Association of Midtown since 2016 and works as creative director for CityHeart Church in Jackson.

The theme for the event is "Speak Up! Speak Out! Erasing the Stigma of Mental Health." The summit will include a full-day conference on Wednesday, May 8, and a half-day of breakout sessions on topics that affect Mississippi families and children on Thursday, May 9.

Canopy will also partner with the Mississippi Department of Mental Health to offer training in Youth Mental Health First Aid during the summit. The curriculum is designed to provide basic mental-health training for teachers, coaches, caregivers, school-resource officers and other individuals who work with children, a release from Canopy says. The all-day workshop will take place on Thursday, May 9, and will qualify for eight hours of continuing education credit for educators and school-resource officers through Jackson State University's School of Lifelong Learning and the Mississippi Department of Public Safety, the release says. The workshop is open to 30 participants on a first-come, first-served basis. Participants must pre-register through the Children's Mental Health Summit website.

Registration for the summit is $100 per participant, which includes the cost of materials, break refreshments, lunch and the CE credits. Both the Summit and post-conference breakout sessions will begin at 8 a.m. with registration opening at 7 a.m.

For more information on the Children's Mental Health Summit, including registration and pre-registration, call 601-352-7784 or visit helpkidsthrive.org.