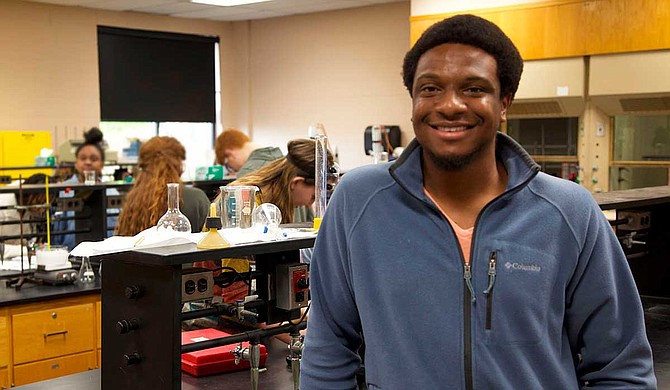 Millsaps College senior DJ Hawkins recently received a Fulbright grant to teach and study in Russia as an English teaching assistant. Hawkins is a Clarksdale native and is majoring in biochemistry with plans to pursue a career as a gastroenterology, or the study of the digestive system. He is the 16th Millsaps student to receive a Fulbright grant.

The program is a national cultural exchange fellowship that works to improve intercultural relations and diplomacy. The late U.S. Senator J. William Fulbright of Arkansas introduced legislation to establish the program in 1946.

Hawkins is one of more than 2,100 U.S. citizens participating in the Fulbright U.S. Student Program for the 2019-2020 academic year. His term in the program begins in September and will run through June 2020. He will teach 20 hours a week at a university.

During his time at Millsaps, Hawkins has served on the college's Honor Council, studied as a summer researcher in chemistry as part of the MS IDeA Network of Biomedical Research Excellence program and worked as a lab assistant in chemistry and a teaching intern in physics. Hawkins also received a Melikian Center Advisory Board Scholarship to study in an eight-week intensive course in Russian at the Critical Language Institute at Arizona State University in 2018.

For more information on the Fulbright Program, visit http://eca.state.gov/fulbright.

The University of Mississippi School of Journalism and New Media sponsored the event. View a full list of finalists from the event here.

Raymond Jones, a doctoral student from Patterson, La., who is majoring in kinesiology and exercise physiology at the University of Southern Mississippi, is one of seven Mississippi graduate students who are members of the inaugural cohort of the Robert Smith, M.D. Graduate Scholars Program. The program is part of the Jackson Heart Study's new Graduate Training and Education Center at the University of Mississippi Medical Center in Jackson.

The Jackson Heart Study is a partnership with Tougaloo College, the University of Mississippi Medical Center and Jackson State University that represents the largest single-site investigation into cardiovascular disease among African Americans. The program studies genetic factors that affect high blood pressure, heart disease, strokes, diabetes and other cardiovascular conditions.

Participants in the program will attend a five-day summer-training institute in the summer of 2019 and 2020, as well as one mid-year meeting, quarterly webinars and trips to the Jackson Heart Study Vanguard Center at Johns Hopkins University. The first summer training institute will be from June 24-28, 2019.

Dr. Robert Smith, the scholars program's namesake, is a Terry native and founder of the Medical Committee for Human Rights. He also pressured health care institutions to expand access to health services for and end unequal treatment of African Americans during the Civil Rights Movement in the 1960s. Smith also founded the Mississippi Family Health Center in 1963 and is currently a practicing physician there.