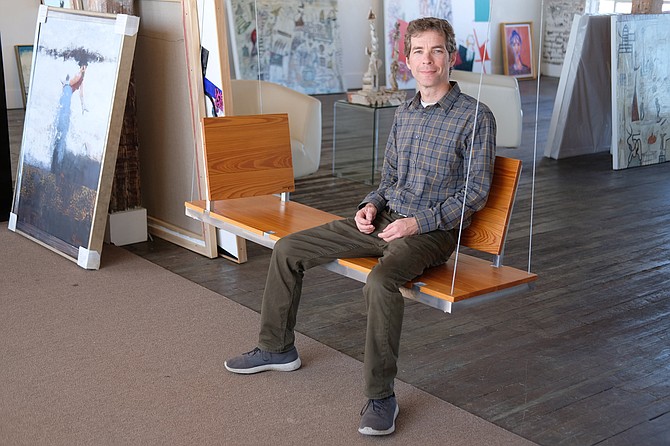 Jackson native Andy Hilton says he likes to think of himself as a "one man factory" for the modular swings he crafts by hand. The 6,000-square-foot warehouse in midtown that houses his business, SwingLab, features table saws, painting booths, routers and numerous patterns and "jigs," a type of template, for crafting his design.

"(They) are a modern take on the classic Southern porch swing," Hilton says. "My goal was to reinvent the idea of the swing, take it back to the basics and then redesign it from there."

He says he accomplished his goal through mostly changing the aesthetics and simplifying its appearance while keeping the swing contemporary-looking.

Hilton, 39, graduated from Murrah High School and then went to Auburn University in Alabama, where he received a bachelor's degree in industrial design in 2003. After graduating, he returned to Jackson and took a job installing stained glass windows for Pearl River Glass Studio. In 2005, Hilton moved to New Hampshire to take a job developing playgrounds for a company called Learning Structures. He moved back to Jackson in 2009 and opened a company called Studio2 Concrete, which manufactured concrete countertops, benches, planters and other decorative pieces. In 2013, Hilton took on a project that eventually led to him coming up with SwingLab.

"I've always enjoyed the idea of furniture design, so when someone asked me to do a custom commission to create a hanging bed, I was interested," Hilton says.

The bed was suspended from the ceiling like a swing, and that got the gears in his head turning about how that could be made into a product, he says.

"Plenty of people love swings, but a lot of young people gravitate toward more modern designs rather than traditional," he says. "I started brainstorming, sketching and prototyping, and came up with my modular swing design. I opened SwingLab and started selling them that year."

Hilton serves on the board of the Business Association of Midtown, a group of business owners in the midtown neighborhood that promote the community. He also volunteers with Pearl River Clean Sweep, which is an organization that picks up litter to keep the Pearl River clean.