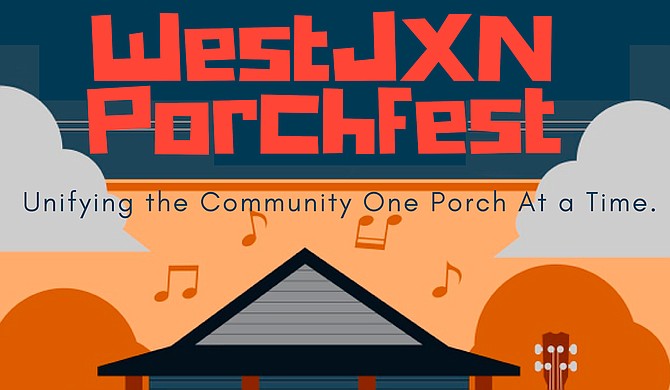 WestJXN Porchfest will be a free, family-friendly celebration of local musicians and businesses, and will feature performances from DJ Expo and the Southern Komfort Brass Band, and food for sale from Steamer's Shrimp and Crab Market, Norma Ruth's, Sherria's Chicken Coop and OhhLaLa's Bakery. Photo courtesy WestJXN Porchfest Photo by WestJXN Porchfest

The event will be a free, family-friendly celebration of local musicians and businesses, and will feature performances from DJ Expo and the Southern Komfort Brass Band, and food for sale from Steamer's Shrimp and Crab Market, Norma Ruth's, Sherria's Chicken Coop and OhhLaLa's Bakery.

WestJXN Porchfest organizer Dyamone White, who works as a commercial loan review officer for Hope Enterprise, describes Porchfest as an event where people in a neighborhood let their porches be used as a stage for public announcements, community forums or town halls. Neighbors Gretchen Hildreth and Lesley Greene held the first Porchfest in Ithaca, N.Y., in 2007, and the concept has since spread nationwide. White says WestJXN Porchfest will be the first Porchfest event in Jackson.

"We have 18 neighborhoods in west Jackson being represented in this event, and we intend to have participants speak about plans to make this a monthly event, with Porchfest going to a different neighborhood each month," White told the Jackson Free Press. "We hope to bring together new homeowners to network, voice issues the community is facing, highlight new and old businesses, and talk about what we want west Jackson to look like in the future."

Hilliard, White and a group of other west Jackson natives decided to bring Porchfest to the capital city during the Hope Community Leadership Conference in Greenville, Miss., in July. NeighborWorks America, a national nonprofit that promotes community development, held a class on community events during the conference, which Hilliard's group attended. After the class, White says they decided on Porchfest as the best event to use to invite people within and without west Jackson to help improve it.

"Porchfest represents a national movement that we wanted the collection of neighborhoods in west Jackson to be able to come together over," Hilliard told the Jackson Free Press. "The tagline we're using is, 'Unifying our community one porch at a time.' Every month, we plan to highlight the best of neighborhood businesses, restaurants, social service organizations, musicians and community partners.

"West Jackson is unique in being a collection of neighborhoods that each has its own identity, concerns and issues, which sometimes makes it hard to come together as one west Jackson. This event will give us a chance to socialize with our neighbors and determine ways to maximize the resources our neighborhoods needs and collaborate to apply effort where it's most needed to rebuild west Jackson."

WestJXN Porchfest is Sunday, Oct. 28, from 4 p.m. to 6 p.m. at 1225 Robinson Road. Hope Enterprise Corporation, Jackson State University Community Engagement, the Center for Social Entrepreneurship, BankPlus and Systems Consulting are the sponsors for this event. For more information, call Kimberly Hilliard at 601-979-2317 or email [email protected].