"The Hate U Give" Premier Celebration, The Nail Bar and Spa and Bras Along the Bridge at Riverwalk | Jackson Free Press | Jackson, MS

"The Hate U Give" Premier Celebration, The Nail Bar and Spa and Bras Along the Bridge at Riverwalk 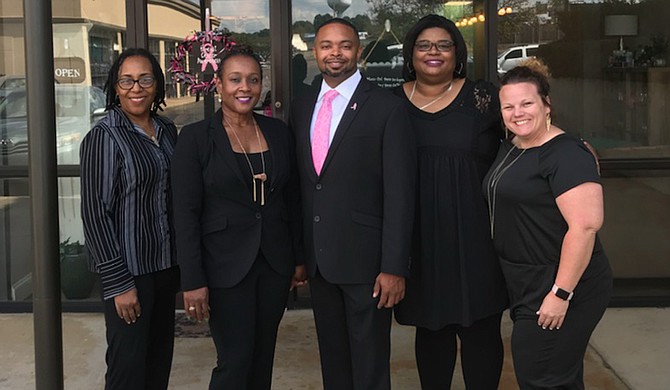 A celebration of the release of the film "The Hate U Give," based on Jackson native Angie Thomas' best-selling novel of the same name, is on Wednesday, Oct. 10, at the Mississippi Civil Rights Museum and Museum of Mississippi History (222 North St.). The film entered select theaters on Friday, Oct. 5, and will come out nationally on Friday, Oct. 19.

The movie-release celebration, which Jackson Mayor Chokwe Antar Lumumba and wife Ebony Lumumba, the Mississippi Book Festival, the Mississippi Department of Archives and History and The Well Writers Guild are hosting, begins with a private reception on Wednesday from 6 p.m. to 7 p.m. Tickets to that reception are $100 per person and include reserved seating at the film's Mississippi premiere on Oct. 11 at Malco Grandview Cinema (221 Grandview Blvd., Madison). The free public reception will be from 7 p.m. to 9 p.m. on Wednesday, with the first 100 guests to arrive receiving tickets to the premiere.

Thomas, a 2011 Belhaven University graduate, initially wrote "The Hate U Give" as a short story for her senior project after the police shooting of an African American man named Oscar Grant in Oakland, Calif. She expanded the short story into a novel after over the course of five years, as conversations of race and police violence grew more prolific.

The book and film follow the story of a black high-school student named Starr Carter who witnesses a police officer shoot and kill her unarmed friend, Khalil, at a routine traffic stop after they fled a shooting at a nearby party. The movie stars Amandla Stenberg as Starr Carter, and Issa Rae, Common and Regina Hall.

The salon also allows customers to book the space for events such as spa, bridal and birthday parties. Pilkington plans to begin hosting educational seminars on her business' services in November.

Pilkington, a Florence, Miss., native, is also a geriatrician and internal medicine doctor at Merit Health Medical Group Primary Care in Byram. She opened Magnolia Nail and Spa in May 2018.

"Several years ago, I had clients asking me about Botox and other treatments, and I saw how such treatments could change the well-being of people and how they see themselves," she told the Jackson Free Press. "I thought then that opening this kind of business was something I needed to do. I enjoy seeing people witness the results of working on their hair or nails. It's very gratifying and something you don't see when you're treating things like blood pressure."

Bras Along the Bridge at Riverwalk Casino

Riverwalk Casino Hotel (1046 Warrenton Road, Vicksburg) is collecting bra donations throughout October in honor of Breast Cancer Awareness Month as part of its "Bras Along the Bridge" event. For every bra it receives, Riverwalk will donate $1 to the American Cancer Society.

Participants can drop off bras at Riverwalk or participating sponsor locations. Anyone who brings a bra to Riverwalk between 10 a.m. and noon or 4 p.m. to 6 p.m. on a Sunday will receive a 50-percent-off voucher for the casino's buffet for that day.

On Saturday, Nov. 3, the casino will host a bra-viewing ceremony on the bridge for breast cancer survivors, which will include a check presentation for the ACS donations at 10 a.m. All visitors at the viewing ceremony from 9 a.m. to 11 a.m. will receive a buy-on-get-one-free buffet coupon for Riverwalk.

For more information and a full list of drop-off locations, visit riverwalkvicksburg.com.