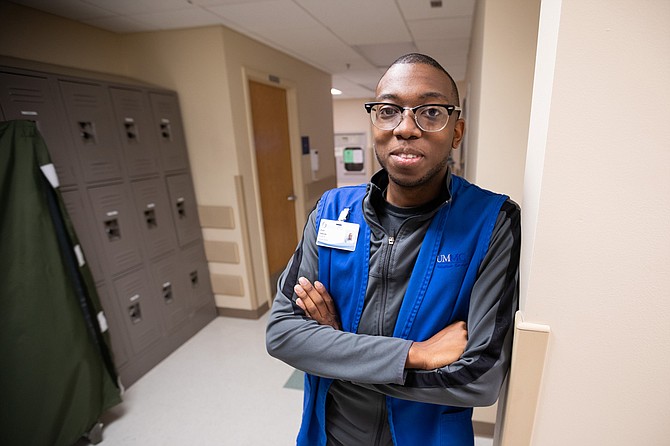 When University of Mississippi Medical Center named Trenton Johnson as one of its Volunteers of the Year at an Oct. 19 banquet, the 23-year-old Jackson State University senior says it was everything he wanted.

“When I first found out that UMMC named a Volunteer of the Year after I started volunteering there, I knew from the start that was what I wanted to achieve,” he says. “I wanted to show that I have a strong initiative and am dedicated to volunteering, so I was elated to hear that I’d reached what I was working so hard for.”

Johnson began volunteering at UMMC in 2017, at first to fulfill an independent study requirement for a biology class at JSU. While the requirement for the class was only 20 hours of volunteer work, Johnson stayed on at the hospital and logged more than 250 hours of service in a single year.

At the medical center, he restocks rooms, responds to patient call lights, answers telephones, visits with patients, and delivers food and nonmedical items to them in their rooms.

“I’m there to give all the patients at UMMC a friendly face to see,” Johnson says. “I comfort any family members if I see them crying, bring them juice and crackers, and do anything else they need. A big part of what kept me going back to UMMC so much is that they give a great sense of respect to volunteers. They treat me just like their workers and make me feel like a vital part of the team there.”

Johnson was born in Gloster, Miss., and graduated from Amite County High School before enrolling at JSU. He is majoring in biology and is set to graduate on May 4, 2019. He says that at first he considered enrolling in the University of Southern Mississippi, but changed his mind after touring JSU’s facilities, meeting the professors and seeing the research taking place there. He also wanted to attend in part because of the university’s Sonic Boom of the South marching band, which Johnson describes as “the best band I’ve ever heard.”

It was his grandparents, he says, that helped give him the drive to volunteer from a young age. His grandmother, Edna Johnson, served as a nurse at the Louisiana War Veterans Home and Villa Feliciana Medical Complex, both of which are located in Jackson, La. She also volunteered with local churches and regularly cooked for the elderly in their homes.

His late grandfather, Theotis Johnson, operated heavy machinery for Georgia Pacific for 30 years and passed away on Christmas Eve in 2014. He dedicated himself to mentoring local youth and frequently bought entire boxes of chocolates that students were selling to help raise money for their schools, Johnson says.

“My grandmother has always taught me to give freely from your heart without wanting to get something back,” he says. “She says that worldly possessions are not what you should expect out of life, and that if you give like God gave, he will bless you in return. As for my grandfather, he taught me how to be a man in society, what to do and what not to do, and how to carry myself. He was my role model growing up because I didn’t have a father in the house, and he’s why I’m the man I am today.”

On Aug. 25, 2015, a drunk driver struck Johnson’s car, which caused him to flip over five times and land in an embankment. After he recovered, Johnson formed a nonprofit group called Friends Against Drunk Driving, where he and other volunteers speak to people who have lost loved ones or otherwise been affected by drunk driving.

In 2017, he also became chairman of the Pike Amite Wilkinson County Mississippi Tobacco Free Coalition, which works to have ordinances passed to reduce the effects of secondhand smoke in the state.

In addition to his other work, Johnson volunteers with the Marfan Syndrome Association, which is named for a heart condition he suffers from in which the heart’s primary aorta is at risk of rupturing or tearing. After Johnson’s father and uncle both died from the condition, his grandmother urged him to go to a doctor to be tested, and he was diagnosed with the condition during his junior year of high school in 2013.

“I have to go in for yearly checkups and tests, but I’m not at risk right now,” Johnson says. “However, my grandmother making sure I went in to get tested is one more thing I have to thank her for.”

Johnson plans to go on to medical school after graduating from JSU with the goal of becoming either a neurosurgeon or a heart surgeon.

“The reason I want to become either a brain or heart surgeon is because I found my love of giving back through the heart, while the brain is where I’ve learned everything that I have from UMMC,” he says. “Either way, I want to be a surgeon who looks at the big picture and uses surgery in a minimally invasive way. I want to help people by getting them on a strict diet and exercise regiment, looking at all the factors at play in regard to their condition and helping them do better.”