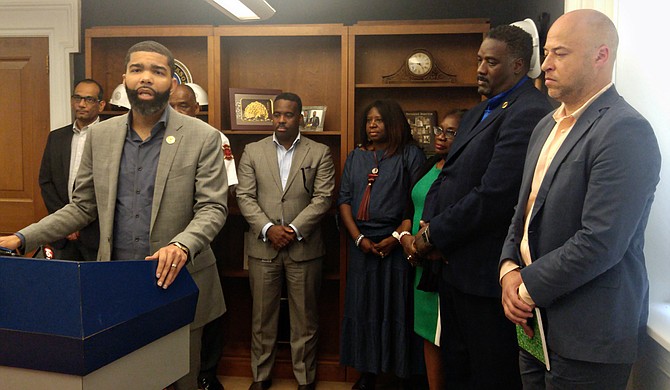 "We truly are excited about engaging our youth," Lumumba said. "Let me be clear that we do not believe nor are we saying that our issues of crime are ... (only) on account of young people. But we have seen a recent spree of instances that have been engaged by a particularly young demographic, and we have failed in some regard as adults if our young people are not directing positivity, so we're going to make the decision that we're not going to allow them to be on that path anymore."

Jackson Police Department officers will receive training in community policing, but Lumumba declined to name the group that will train them, saying the City will release the information at a later date.

"How we direct this training will take advantage of lessons learned around the country and the nation, but it will be specifically tailored to the unique culture of Jackson," the mayor said.

Lumumba also said he will request that the City Council use extra money in the budget to fund youth programs.

"Instead of spending as much time telling young people what not to do, we need to make certain that we are giving our efforts towards telling them what to do," he said.

A summer employment program will aim to teach people ages 16 to 24 work ethic and skills. Part of the program includes a partnership with Apple to teach participants application coding through a curriculum called Swift Playgrounds.

"This is a gamified learning curriculum where students will actually learn how to code for app development," Robert Blaine, Jackson's chief administrative officer, said at the press conference.

Youth will work with corporate partners to develop small apps for the companies, he said.

"We've taken a lot of applicants already for the summer employment program, so that's basically going to take a few more for the coding part. For the most part, those applications have already been taken," Director of Human and Cultural Services Adriane Dorsey-Kidd told the Jackson Free Press.

However, she said that if there is a lot of interest in the program, it could expand.

Those interested in applying should call 601-960-0335 and ask for Family and Youth Coordinator Eva Howard.

Registration for the summer program for children ages 6 to 12 ends Friday. To register, visit the Department of Parks and Recreation at the Metrocenter Mall, and bring the child's birth certificate or shot record and a money order for $110.

There is also an early childhood program for children ages 5 and under. Parents can register their kids for the year-round program by calling Manager Jewell Reed at 601-960-0035. The program has a sliding fee scale so families pay anywhere from $10 a week to $10 a month based on need.

"I would also like to solicit the support of any philanthropic donors, any of our corporations, any of our partners in this city, that they be willing to give donations toward youth programs," Lumumba said.

At the press conference, Parks and Recreation Director Ison B. Harris Jr. said that the City will open five pools on Memorial Day, with an additional pool in Presidential Hills to open the week after the holiday.