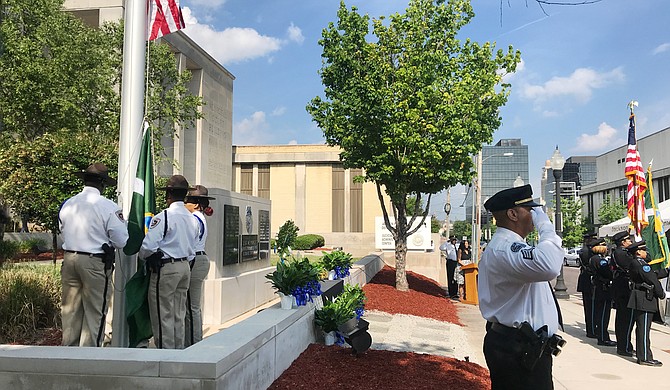 At the annual Jackson Police Department Police Memorial Service for fallen officers on May 16, 2018, City officials gave remarks before families placed yellow roses at the base of the memorial outside JPD headquarters for officers killed in the line of duty. Photo by Ko Bragg

JACKSON — In the sweltering Wednesday heat, the Jackson Police Department put on its annual Police Memorial Service to honor and commemorate the 17 JPD officers who have died in the line of duty since 1893.

The service opened with the national anthem, pledge of allegiance and a song selection from Erica Taylor, a student at Lanier High School. Then the audience of law enforcement officers, public officials and families of the fallen officers heard comments from Commander Stephen Wells, Interim Police Chief Anthony Moore, Mayor Chokwe Antar Lumumba and the keynote speaker Judge James E. Graves Jr. of the 5th U.S. Circuit Court of Appeals.

Commander Wells set the tone for the event, illustrating what goes through an officer's mind every day before starting the job.

"What we have chosen in this profession is to be guardians of the communities of Jackson," he said. "Each day we kiss our own babies before going to work, only to go out and save other babies' lives. Every time we suit up, it's a moment we realize we put our own lives in harm's way."

Chief Moore talked about the first time he experienced a JPD officer killed in the line of duty—Officer Bobby J. Biggert in February 1989.

"It was one of the most horrifying feelings that I felt," Moore said. "And since that time any time that I ever hear that a law enforcement officer loses his or her life, whether it's here in Jackson, Missississippi, or any department, it is a bad bad feeling."

Mayor Lumumba, making what he called unusual brief remarks because of the rising temperatures, encouraged the family members and loved ones in the audience to focus on the positive aspects of the fallen officers' lives.

"I would challenge you to remember them in this regard ... not for the way in which they died but the lives they lived," the mayor said. "Because it is truly life that gives death its great significance. And these are individuals that lived lives of service and commitment to other individuals and that is worth commending more so than the way that they died. And so, we celebrate their lives today."

Judge Graves, a Mississippi native and an Obama-era appointee, spoke about the importance of law enforcement officers, but especially police.

"We are here to honor public servants, those who gave their lives in the line of duty," he said. "And for police officers, that line is the very front line in our criminal-justice system."

After the formal remarks, the families got to pay their respects to their fallen loved ones.

The family of the late Thomas D. Catchings Sr. had seven people go up to the stone memorial in front of JPD headquarters with an escort from the Jackson Police Department/Hinds County Sheriff's Office Honor Guard to bestow a single yellow rose at the base of the monument where Catchings' name and those of other slain JPD officers are etched into a plaque. Each family in attendance or a volunteer went through those same motions, and the families received a potted plant in exchange for placing the rose.

After the ceremony, Temeka Holden-Hutchins, Catchings' oldest daughter, told the Jackson Free Press about what happened to her father the fateful night in March 2005 when he was shot and killed.

Officer Catchings was heading to pick up some of his younger children after he had been at a motorcycle training, she said. Someone who had just been carjacked flagged him down, and Catchings pursued the car. Omar Hampton, 18, had stolen the car and when Catchings caught up with Hampton after he had driven the car into a ditch, Hampton fired his gun. Catchings returned fire, killing Hampton, and he succumbed to his wounds at the hospital later that day.

"I was six months pregnant when it happened...," Holden-Hutchins said. "This was the first grandchild, (my dad) knew I was pregnant and knew I was having a boy, so he was excited about that but he didn't get to meet him."

Holden-Hutchins said that her dad did not have a vest on, as he was off-duty at the time.

A lifetime resident of Jackson, Holden-Hutchins recently moved away to Texas, but still brought her young sons to attend the ceremony Wednesday morning because it means a lot to her.

"It makes you feel special that they're keeping hope alive for everybody else and recognizing the fallen officer," she said. "It's a lot, you know, when you put that uniform on—that's tough. You never know if you're going to come back home to your family."

With 39 homicides in the City of Jackson to date, Holden-Hutchins said she keeps up with the news, and she is not happy with the way thing are going in the City.

"It makes me feel sad that the City is going down like that .... It's just sad, everything that's going on every time you look at the news—The number of homicides, and it's not even summertime yet. It's crazy."