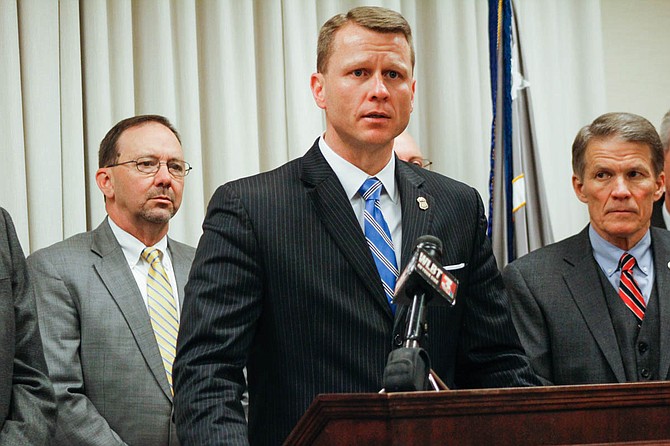 The following is a verbatim press release from the office of United States Attorney D. Michael Hurst, Jr.:

Jackson, Miss. - Arthur Lamar Adams, 58, of Jackson, has been charged by Criminal Information for his role in a large multi-million dollar Ponzi scheme that adversely affected hundreds of victims across multiple states over a number of years, announced U.S. Attorney Mike Hurst and FBI Special Agent in Charge Christopher Freeze.

Adams will appear before U.S. Magistrate Judge Linda R. Anderson today at 2 p.m. for his initial appearance and arraignment on the Criminal Information.

Adams is charged with two counts of wire fraud involving a scheme to defraud investors, and one count of bank fraud, all in connection with a Ponzi scheme using Madison Timber Properties, LLC, a company wholly owned by Adams.

"Greed is not good. Greed drove this individual to lie, cheat and steal from fellow Mississippians, and led him to prey upon others outside our state, simply to personally benefit himself. While this may be one of the largest Ponzi scheme ever committed in our state, our citizens can rest assured that these criminal actions by this defendant sadly affecting so many people will be met with swift and certain justice. I commend the FBI special agents and prosecutor in this case for their diligent work. We will continue to pursue this case and all the evidence until all crimes have been discovered, all criminals have been brought to justice, and all victims have been assisted," said U.S. Attorney Hurst.

As charged in the Criminal Information, beginning as early as 2011 and continuing through April 2018, Adams devised a scheme to defraud investors by soliciting millions of dollars of funds under false pretenses, failing to use the investors' funds as promised, and converting investors' funds to Adams's own benefit without the knowledge of the investors. Instead of investing his clients' money, Adams used the invested funds for his own personal benefit and for purposes other than those represented to investors, which also included making payments due and owing to other investors, thus perpetuating the Ponzi scheme. During the fraudulent scheme, Adams fraudulently obtained well in excess of one hundred million dollars from more than 250 investors located in at least 14 different states.

Adams entered into fraudulent investment contracts with investors, most often in the form of promissory notes on behalf of Madison Timber Properties. The loans typically guaranteed investors an interest rate of 12-13%, with the interest to be repaid to investors over the course of 12-13 months. The monthly payments due on these promissory notes were typically due on either the first or the fifteenth of the month.

Adams created false documents causing investors to believe that their investments were secured by sufficient collateral from which they could recover all or part of their investment in the event that Madison Timber Properties defaulted on the loans. Specifically, Adams created false timber deeds purporting to be contracts conveying timber rights from landowners to Madison Timber Properties. Adams forged the signatures of landowners and also created false timber deeds purporting to convey timber rights from Madison Timber Properties to the investors. To further lull investors, Adams had many of the documents notarized to make the investments appear legitimate. Adams also required the investors to agree not to record their timber deeds unless Madison Timber Properties defaulted on the loan agreement by failing to make a payment. In many instances, Adams also provided a "timber cruise summary" purporting to state the value of the timber located on a particular parcel of land. These "timber cruise summary" documents were also false and had been created by Adams to induce investors to give money to Adams under false or fraudulent pretenses.

Investors are requested to gather and retain any documents that they have concerning their investments with Madison Timber Properties, LLC and/or Arthur Lamar Adams. Information about developments in this investigation and further instructions on how to provide information to the pertinent authorities will be provided at the earliest possible date. The FBI and the U.S. Attorney's Office will be reaching out to identified victims shortly.

We know that investors are anxious to learn whatever they can about the status of their investments and the assets of Madison Timber Properties, LLC. Although we cannot provide further details at this time, please be assured that all those involved are working diligently to investigate this matter and to locate and preserve assets that can be used for restitution to defrauded investors.

The case is being investigated by the Federal Bureau of Investigation and the Securities and Exchange Commission. The case is being prosecuted by Assistant United States Attorney Dave Fulcher.