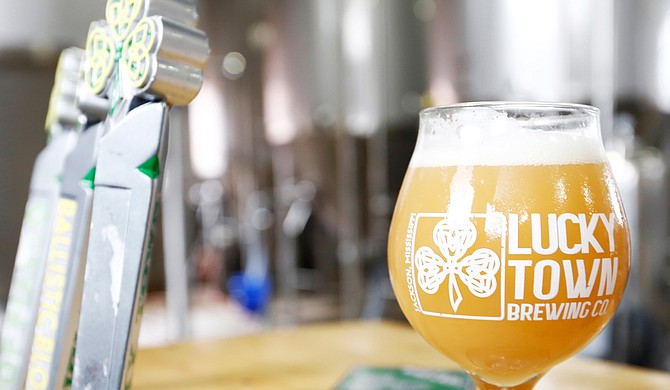 During Tap Takeover, Lucky Town will have several of its craft beers, including Ballistic Blonde and Lucky Town Pub Ale, on tap at the restaurant, as well as The District's go-cup station. Photo by Imani Khayyam.

A previous version of this story listed the wrong date for Tap Takeover. The event will be help Sunday, July 29. We apologize for the error.

During Tap Takeover, Lucky Town will have several of its craft beers, including Ballistic Blonde and Lucky Town Pub Ale, on tap at the restaurant, as well as The District's go-cup station. The event also coincides with "The District Green Live" music series and features a performance from John Causey.

In honor of the back-to-school season, Chaney Day will offer six classroom-themed child photography sessions at Kendra Scott during the event, and will donate the photographer's creation fees from the sessions to the school. Only six sessions will be available and will take place in 30-minute increments from 2:30 p.m. to 5:30 p.m. Parents can schedule a session by calling 601-941-7642.

Kendra Scott will also hold a sale during the event with 15 percent off all merchandise in the store while the photography sessions are taking place. The event will also feature an appearance from 2017 Mrs. Mississippi winner Marisa Farr, who will be doing car-seat safety checks for parents.

The new 21,000-square-foot space will allow for a greater inventory range and an expanded accessories department, featuring wallets, hats, handbags, t-shirts and more, a release from the company says.

Before the move, Shoe Station will hold a "Million Dollar Moving Sale" during the tax-free weekend, starting Friday, July 27. The clearance sale will feature $1 million worth of inventory from both the Flowood Shoe Station and inventory brought in from other stores.

Shoe Station launched in Mobile, Ala., in 1984 and expanded into Mississippi three years later. Now, the chain has 20 stores throughout Mississippi, Florida, Alabama, Louisiana and Georgia. The stores offer footwear brands such as Birkenstock, ColeHaan, Kavu, Nike, Chaco, Toms, Sperry, Alegria and Brooks.

Launch Trampoline Park (422 Riverwind Drive, Pearl) will host a celebration in honor of its one-year anniversary on Saturday, July 14, from 10 a.m. to 11 p.m.

The event will feature free popcorn, hot dogs and beverages, as well as face painting and discounted laser tag and jump sessions. Customers can schedule a one-hour jump and a laser-tag game for $5 each. The jump discount is only available in-store and limited to one per person.