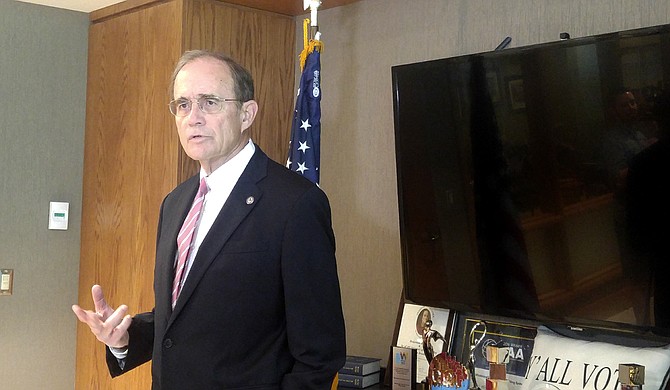 Secretary of State Delbert Hosemann said he expects an abysmally low turnout for the run-off election on June 26. Photo by Marie Weidmayer

JACKSON — The run-off election on June 26 likely will have low turnout, Secretary of State Delbert Hosemann said at a press conference on June 21.

"To say we'll have low lines at the polls would be an understatement," Hosemann said. "I doubt if anybody in the state of Mississippi will take more than five minutes to cast their ballot."

The run-off has two races on the ballot, a seat in the United States Senate and the U.S. House of Representatives.

In the race for the Democratic nomination for U.S. Senate, Howard Sherman and David Baria will face off. In November, the winner will compete against Republican incumbent Roger Wicker.

The June 5 election saw just 13 percent of registered Mississippi voters at the polls, which was an unacceptable turnout, Hosemann said.

"The turnout this last time was abysmal. All of us as citizens of Mississippi ought to be a little embarrassed about ourselves as we came out with about 13 percent of the vote," Hosemann said. "The antithesis of that is 87 percent of the people in Mississippi didn't bother to cast a ballot for United States Senator or U.S. House of Representatives."

The last party primary election saw about 21 percent of registered voters, which is part of the trend of fewer people voting, Hosemann said.

"We are unfortunately on a downward trend in Mississippi," Hosemann said. Why is puzzling to me, to the candidates who spent untold amount of time knocking on doors, shaking hands, sending mail-outs, all the things candidates are supposed to do, and yet we continue to have what I refer to as an abysmal performance at the ballot box."

Since turnout is likely low, every single vote counts, and it counts for a lot. That makes it even more important to show up to the polls and vote, Hosemann said.

"When you say your vote doesn't count, in this election your vote will count for 10 people," Hosemann said. "Every time you go cast a vote, you've voted for nine other people that didn't show up. If you don't think your vote counts go look at the numbers."

But, if you do not cast a ballot, you have no right to complain about the resulting policies and politics, Hosemann argued.

"I don't know that there's a bad candidate on the Republican side or the Democratic side. The lack of enthusiasm—the people who are responsible for your ballot is you," Hosemann said. "Look in the mirror, that's the person that will cast a ballot. Don't call some talk radio show, write a letter to the editor or complain at church if you haven't voted. Don't complain about President Obama or President Trump or anyone if you don't cast a ballot. Don't complain, man. It doesn't take that long, we're talking five minutes."

Polls are open from 7 a.m. to 7 p.m. on Tuesday, June 26. To learn more about the U.S. Senate race, read an analysis of the two candidates. To learn more about Third U.S. congressional candidate Whit Hughes, read his interview here. Michael Guest declined to do an interview. Read other interviews and questionnaire responses at jfp.ms/2018elections.