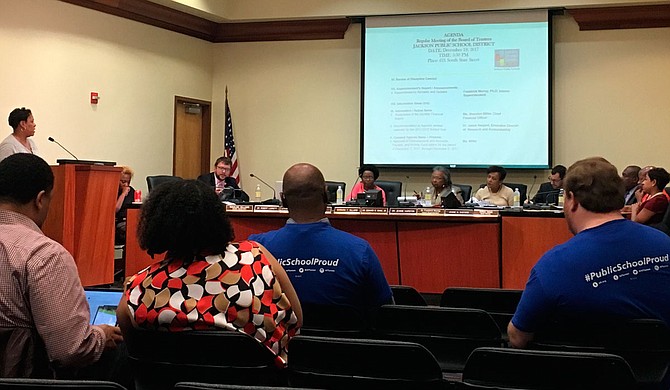 The Jackson Public Schools Board of Trustees has created a Citizen's Oversight Committee to oversee the spending of bond funds, if the $65 million bond passes on Aug. 7. Photo by Arielle Dreher.

JACKSON — If the $65-million bond passes on Aug. 7, the Jackson Public Schools Board of Trustees have framework in place to create a bond oversight committee.

The money will repair and renovate the 56 buildings in the district, and provide the necessary repairs to avoid the State taking over JPS, the JPS board says. If it passes, no taxes will increase, as the Jackson Free Press previously reported.

During public meetings, residents expressed a desire for oversight as to how the district will spend the bond money. At a special meeting on July 30, the JPS board established a Citizen's Oversight Committee, which will have seven members representing each of the City of Jackson's wards. Board members will appoint the oversight committee members from their respective wards, the resolution says.

However, the committee does not have any authority to make decisions regarding the use of funds.

The Citizen's Oversight Committee will remain in place until the completion of construction, or when the district spends all bond funds. The Board of Trustees can also dissolve the committee.