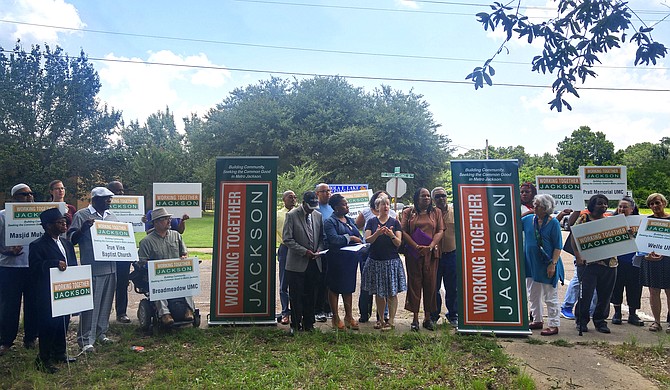 Members of Working Together Jackson announced their support of JPS' bond referendum. The election is Aug. 7. Photo by Marie Weidmayer

The district is seeking the $65-million bond to provide renovations and repairs to its 56 school buildings. The Mississippi Department of Education requires about $15 million of renovations to avoid a state takeover, the Jackson Free Press previously reported. The 40 organizations that form Working Together Jackson held a press conference on July 25 to announce their support of the bond referendum.

"We're supporting the bond because we're all about rebuilding our schools," coalition member Stacey Donaldson said at the conference. "Twenty-five percent of the water fountains in JPS do not work, and the bond will address these issues and many other problems cited by the State."

Working Together Jackson said it would bring at least 2,000 people to vote "yes," although the organization is hoping for even more people, member Jimmie Edwards, who is also pastor at Rosemont Baptist Church, said.

"Our goal is to get out to vote," Edwards said. "We're going to the community and knocking on doors and letting them know how important this issue really is. We need everybody to support us and get out and make sure that this bond issue passes."

The JPS bond is not just a Working Together Jackson issue; the organization is reaching out to all community members and encouraging them to vote "yes," member Sarah Campbell said.

"We would like for them to visit our website and make a personal pledge to join us in the campaign to bring more resources into the public schools," she said.