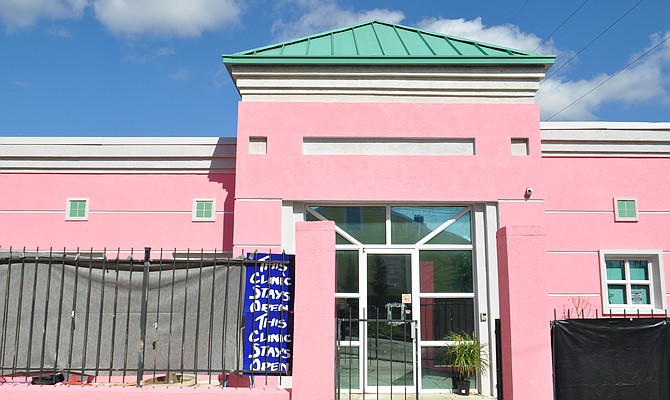 The Jackson Women's Health Organization is the only abortion clinic in the state of Mississippi. Photo by Trip Burns.

Republicans are anxious to make Mississippi the first state that bans abortions after 15 weeks, but making it more difficult for residents to access abortions won’t stop women from doing so. I believe we must first address the No. 1 factor that appears to drive the demand for abortion: poverty.

In January 2018, the Jackson Free Press reported that former House Judiciary B Committee Chairman Andy Gipson, R-Braxton, (now state’s agriculture commissioner) wanted to prevent women from being adversely affected by abortion, but poverty has a far greater toll on mothers and their children.

A recent University of California study followed more than 800 pregnant women who were denied abortions at 30 clinics, and found that the majority were living in poverty during the pregnancy. The findings further showed that having the baby led to a nearly four-fold increase in the likelihood that the woman’s household income was below the federal poverty level. The authors concluded that restrictions on abortion may result in reductions in full-time employment, increased incidences of poverty, more women raising children alone and a greater reliance on public assistance.

The 2017 Kids Count Data Book reported that single-female-led households are the single leading factor associated with Mississippi’s children having the highest poverty rate—31 percent—in the nation. In 2015, 324,000, or 48 percent, of children resided in female-led households in Mississippi. Twenty-eight percent of those kids lived in homes with parents who did not have a high-school diploma.

The report also showed that black children are at a greater risk of being born in a poor-female-led household in Mississippi, as black mothers are less likely to be married. From 2012 to 2016, there were more than 100,000 marriages in Mississippi. White women accounted for 67 percent, more than twice as many marriages involving black women, data from the Mississippi Department of Health show. Additionally in 2015, 37 percent of black children did not have a parent with full-time, year-round employment.

The 2016 data from the MDH shows that in that year, the state had 4,457 abortions. Fifty-four percent of those occurred in the state and 46 percent in other states due to Mississippi’s anti-abortion laws. Single women accounted for 90 percent of all abortions among the state’s residents.

Seventy percent of abortions in the state were among single women who already had children. About 30, 23 and 12 percent had at least one, two and three children, respectively.

Also, the data revealed that single, pregnant women in Mississippi are less likely to have a college degree, which often leads to gainful employment. They also seem to be at a greater risk of seeking an abortion or experiencing inadequate prenatal care, preterm births, low-birth-weight babies, medically unnecessary Caesarian sections and labor inductions, as well as residing in poverty with their children.

Among those residents that had abortions in Mississippi, approximately 41 percent were among women who had attained “some college,” which means they were likely pursuing a degree when the abortion occurred. They were single, poor and probably had a fragile support system; consequently, another child would have forced them and their children deeper into poverty.

Gipson’s former district, which covered Simpson and Rankin counties, had 2,319 pregnancies, 91 percent of which resulted in live births. Sixty-five percent of the live births occurred among married residents. The majority (36 percent) of the mothers (both married and single) had attained “some college.”

Additionally, the rates of poor birth outcomes were highest among single mothers and those with some college. For instance, the rate of preterm births, the leading cause of infant deaths, was 36 percent among those that had some college experience, compared with 19 percent and 12 percent among women with college and advance degrees, respectively.

Low-birth-weight babies, or those born weighing less than 5 pounds and 8 ounces, were more likely to be born to mothers who had some college compared with those that had a college or advanced degree.

Mothers who had attained some college were twice as likely to experience an unnecessary elective C-section or an induction of labor as mothers who had a college degree, and three times higher than mothers with an advanced degree.

Moreover, of the 9 percent abortions that occurred in that district, 81 percent were among single females. And, most (36 percent) had attained some college, compared with 21 percent and 8 percent of those with a college or advanced degree, respectively. Women with advanced degrees had the lowest abortion rate among all educational groups.

It appears that the higher the educational level, the less likely the woman will terminate the pregnancy, and the more likely the mother and child will escape living in poverty. The 2017 Kids Count Data Book shows that in 2015, 35 percent of single-female-led U.S. households had incomes below the federal poverty line, compared with 8 percent of married couples with children. However, a single mother armed with a college degree can make a significant difference in her household because she is better able to earn a higher income, therefore increasing the quality of life of her family. Overall, single mothers with college and advanced degrees are more likely to produce healthier children, who also are likely to attain higher education and professional success.

A 2017 report from the Institute for Women’s Policy Research showed that single mothers in college more than doubled in the school years between 1999 and 2012. The report made the following key findings: Nearly 2.1 million students—or 11 percent of all undergraduates—are rearing children without a partner; women of color in college are especially likely to be single parents; nearly two in five black women (37 percent) are rearing a child without the support of a spouse or partner while in college, compared with 14 percent of white women; 30 percent of single student mothers attend for-profit institutions—triple the rate of women students without children. In 2015, just 31 percent of single mothers aged 25 and older held a college degree, compared with 54 percent of comparable married mothers; four in 10 women at two-year colleges said that they are likely or very likely to drop out of school due to their dependent-care obligations.

In Mississippi, the poorest state in the nation, single mothers experience great hardships when pursuing a college degree. The Women’s Foundation of Mississippi and the Institute for Women’s Policy Research surveyed more than 500 students from 13 of Mississippi’s 15 community colleges and found that many of the state’s female college students, particularly single mothers, are experiencing substantial hurdles to completing their degrees. Thirty-one percent are parents who must navigate the complicated demands of balancing work, school and family responsibilities. Three in 10 students have interrupted their college careers. Among those who have taken a break, financial considerations represent the most common reason for doing so (40 percent), followed by the experience of stress or becoming overwhelmed (33 percent), needing to care for family (30 percent) and health issues (28 percent).

The report also showed that long commuting times can pose a barrier to completion for students juggling multiple roles and responsibilities. More than one in five students (22 percent) spend more than one hour commuting to and from school (round trip). Also, child-care access and affordability is a major challenge for mothers in Mississippi’s community colleges. Forty-seven percent with children ages 10 and under say they cannot get the quality child care they want because it is too expensive, and 53 percent report that paying for child care or afterschool care is somewhat or very difficult for them. Fifty-nine percent of respondents with children aged 10 and under who have taken time off from school or dropped out say that having more stable or affordable child care would have helped them stay in college.

Interestingly, nearly half of the students majored in nursing or other health sciences, and more than four in 10 (44 percent) stated their professional goal is to become a health care professional. That’s great news for Mississippi, the medical care industry is one of the largest and fastest growing ones in the state.

So, there is a huge demand for clinical professionals, especially nurses, in Mississippi. Therefore, it would make good sense for the state to place its focus and support toward ensuring that single mothers complete their college education and pursue health-care careers in Mississippi.

If pro-birth Republicans are serious about improving the lives of women and children, and ending abortion, they must first reduce the demand for abortion through eradicating poverty, which requires investing in college education. The best way forward is for state legislators to increase funding for community colleges and work with college administrators to develop a strategic plan that addresses obstacles that prevent single mothers from attaining a college degree.

Politically charged rhetoric and anti-abortion bills and protests are certainly not the solution. Reducing the poverty among single poor mothers and their children demands compassionate and bold leadership, financial resources, health-care insurance and a cohesive social support system, which Republican legislators have yet to offer.

On Friday, May 4, the Mississippi chapter of March for Moms will host a rally and blood drive to raise awareness about the state's poor birth outcomes. The event is at the Mississippi State Capitol (400 High St.) from 10 a.m. to 2 p.m. For more information, call 601-953-9993.

Getty Israel, who has a master’s degree in public health, is a health consultant and author. The column does not necessarily reflect the opinions of the JFP.