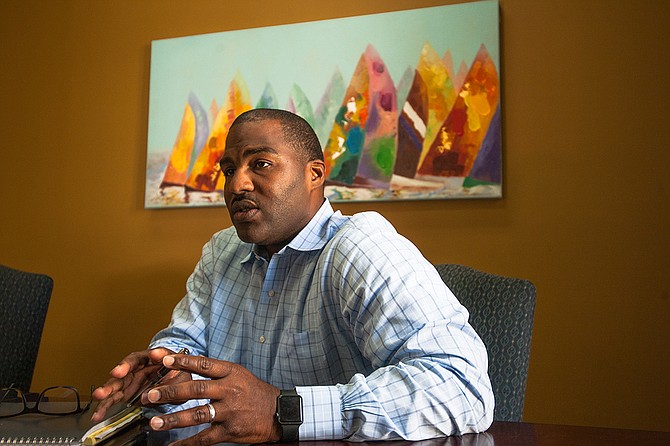 Gerald Mumford, candidate for Hinds County attorney, wants to “run prosecutors out of business” and to mentor youth before they get into the criminal-justice system. Photo by Stephen Wilson

The county attorney is responsible for prosecuting misdemeanors that occur in the unincorporated areas of Hinds County outside Jackson and Clinton, for example, such as Mississippi Highway Patrol speeding tickets. The Hinds County attorney is also the chief prosecutor in youth court with a staff of assistant prosecutors that help him or her carry on those duties.

The county attorney makes around $55,000 annually for the part-time position. Three candidates are running for the post, including Mumford.

Mumford has always considered Hinds County his home, and he convinced his wife, Kamesha Mumford, to begin their family here because it was important for him to be in a place where they could have an impact, he said last week.

The candidate spoke to the Jackson Free Press ahead of the Nov. 7 election about the value of mentoring youth, "smart justice," and his desire to keep kids out of the court system.

Why do you want this job?

I have a passion for service. ... I want to be the Hinds County attorney in particular because I have a passion for domestic violence. This is Domestic Violence Awareness Month. As a city court judge, I've taken particular interest in those kinds of cases because those kind of cases affect the families. I'm running on real experience, I'm running on integrity, and I'm running on smart justice. My smart-justice piece is protecting families, it's being tough on crime, and it's administering smart justice, (which) is simply focusing on the violent crimes. It focuses on the crimes that matter. It focuses on, as far as our youth court is concerned, making sure we give these young people the direction and discipline they need to make better decisions.

My goal as a prosecutor is not to make all the police officers happy with writing tickets and what not; it's to administer justice. Because as a judge, I don't have that discretion. I have to decide on the cases that the prosecutors present to me. All too often, we have prosecutors who are not looking to seek justice; they're simply there to protect one side. I think it's a balancing system, and I want to be there because I think I'm fair. I think I'm honest.

You mentor at Jackson Public Schools. What would change if the state takes over JPS?

I think if the state takes over the district, there still will be a need for what I'm offering, which is mentorship.

The Hinds County Justice Court is the front door to the criminal-justice system in Hinds County. We all know the issues that happen in circuit court with delaying cases. A lot of folks have interactions with the municipal courts and the justice courts and never get to circuit court.

My goal in youth court is to mentor these kids. I've talked all over the county from day one about what we're going to do: I'm going to assign my prosecutors to different high schools in the county because I believe these young people need to see prosecutors in the classroom before the courtroom. I want to prevent them from coming into the system because we know from experience that if they get in the system they get gobbled up.

How do you change that?

So my goal is to run prosecutors out of business—I think that's kind of funny, but if we mentor enough of these kids and give them examples and partner them with people that will assist and try to mentor them, I think we can get them on the right course. And dealing with the youth-court piece, we're trying to mentor these kids and find out what's wrong with them.

A lot of kids have different issues: some kids are over-medicated, some are on drugs. We need to figure out what their issues are so we can try to solve them so they won't get to circuit court.

Well, I think it can be for you if you have the right folks at the controls. We need to have young people saying look, law enforcement, they're there to keep us safe, not to harm us. And I think we need somebody in the system to explain that to them and to say, "look, I'm in the system, and I'm not trying to oppress anyone. I'm trying to help you, help keep you safe."

It's something we want to implement, and it doesn't cost a dollar. It just takes the prosecutor who has the vision; it takes his assistants willing to do the work. It's work going to these schools and mentoring; that's something I do with 100 Black Men as well as with my fraternity.

How would you juggle your law firm and this elected role?

The county attorney position is a part-time position, so I'd still maintain my law firm. I've been able to do that. I've had adequate help. My mother helps with my secretarial duties. She's retired, of course, so she helps me. Everything is good. I don't have a lot of bad habits, so that helps me to be able to get my job done and satisfy my clients.

What should voters know about you?

I would borrow a quote from the current mayor by saying we have to decide what the next 20 years are going to look like in Hinds County. We can't be focused on who was elected 20 years ago, who was the first black or white person elected to this office. We have to focus on who has the vision to move this office forward because we can't wait, and we can't risk losing any of these children to the streets.

It's an important election. It's the front door to our criminal-justice system. And we can actually get things done. We don't just have to have someone in office who is just sitting in a seat and just doing the regular mundane job. We have to reach higher for what we want from our public officials.

I promise not to embarrass you if you elect me.

This interview was edited for length and clarity. Email city reporter Ko Bragg at [email protected].