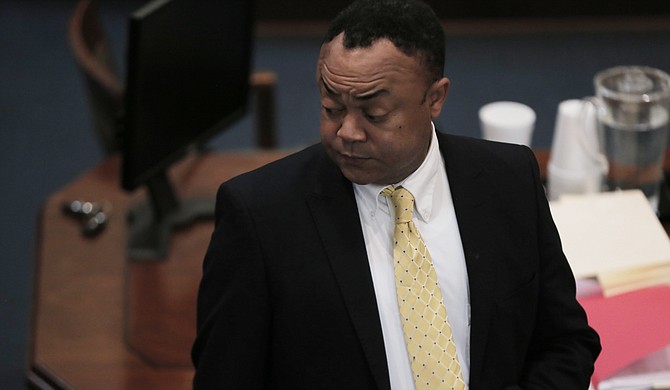 Hinds County District Attorney Robert Shuler Smith is asking the Mississippi Supreme Court to vacate his charges for abusing a former girlfriend before his trial starts in Rankin County. He is pictured here from an earlier Hinds County trial. Photo by Imani Khayyam.

On Monday, Judge Emfinger postponed Smith's trial date to "give appeal court opportunity to rule on interlocutory appeal"— an appeal that takes place while a case is still active—and also to give counsel time to respond to evidence placed into discovery after the judge's original timeline.

Smith's petition said he would suffer "irreparable harm personally and professionally" by going through the trial and then filing a traditional appeal if he is found guilty.

"The risk and damage to (Smith's) professional reputation as a result of going forward on a case that may be reversed on direct appeal ... far outweighs the desire of the Attorney General to prosecute a case over which he has no jurisdiction," an excerpt from the 100-page petition reads.

Should the Supreme Court not grant the interlocutory appeal, Smith's secondary requests are for the court to stay his trial, establish a schedule for briefing and arguments, and prioritize these matters by granting a motion for all of these things to happen expeditiously.

On Oct. 2, John Reeves, the attorney representing Smith, argued in a dismissal hearing in Emfinger's courtroom that the attorney general's office had overreached and exceeded its power by prosecuting a case that the district attorney in Rankin County decided not to pursue.

In the Oct. 2 hearing, Assistant Attorney General Stanley Alexander argued that the Williams v. State case is fundamentally different between Smith's current charges, the most "crucial element" being that the district attorney (who was Smith) in that case completely objected to the attorney general being involved in the matter. In the current case against Smith, the district attorney in Rankin County has no issue with the attorney general's office prosecuting Smith.

Rankin County District Attorney Michael Guest testified that while the attorney general's office did not explicitly ask his office for permission to prosecute Smith, this has become uncontested common practice in his jurisdiction.

"It is common practice for the attorney general's office to bring cases in this district without requesting permission or seeking approval," Guest said in the Oct 2 hearing. "But, no, I did not request, nor did I approve them going forward. But, that is, unless it is a conflict that our office has, the AG's office routinely brings those cases without contact with the DA's office."

Guest also testified that he chose not to prosecute these particular charges because he considered Smith ex-girlfriend's allegations to be a misdemeanor. However, Guest said that if the alleged victim signed an affidavit in justice court, his office would prosecute, but said she did not file the affidavit or request any additional meetings with Guest.

Smith's lawyers maintain that district attorneys need to give explicit permission to the attorney general's office before they're allowed to prosecute. "He didn't request assistance, they're not assisting the DA, they've usurped him, and we rest on our earlier argument," Reeves said at the hearing.

The State should have a response to Smith's appeal by Tuesday, and if the trial goes forward, its earliest start date would now be Oct. 31.