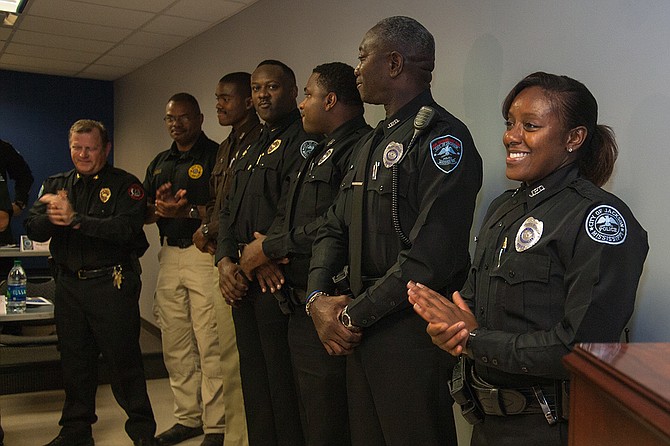 The Jackson Police Department made history Thursday by inducting the first female member of to its SWAT team since its inception in 1971. Officer Cossandra Feltson is the first woman to ever make it through JPD's special weapons-and-tactics training program, although she is not the first woman to try.

"I can't say that there's anything different other than the fact that I did make it," she said at police headquarters of the other women who have gone through the SWAT team training.

JPD also honored four other men for joining the SWAT team. Officer Cornell Norman and George Moore Jr., Corporal William Wade, and Hinds County Deputy Keith Barnett Jr. stood in the front of the room next to Feltson, towering over her petite frame.

"Gentlemen, your achievements were outstanding as anybody's," Chief Lee Vance said to the men receiving the honor. "I just hate you got caught up in history."

Feltson smiled through the photos, her hair swept up in a ponytail with front pieces out in a bang-like fashion.

She talked about her achievements and the fact that despite her gender being the topic of conversation, she does not see the world through a gendered lens. "As far as men and women, I don't even look at it like that," Feltson said. "I'm not intimidated by men or any of the women."

Feltson has been an officer for five years. She has always wanted to be a police officer and sees law enforcement as a prestigious career that is rooted in helping people. She leaned on the encouragement of her family, SWAT team members, and other police officers in the department to enter SWAT training, she says.

Feltson is a mother of three young children, an 11-year-old boy and two girls under the age of 10. She hopes girls everywhere will embrace risks and challenges like she has.

"Girls, just try. Don't doubt yourself," Feltson said. "That's what I did at first. I doubted myself. That's what took me so long to even try."