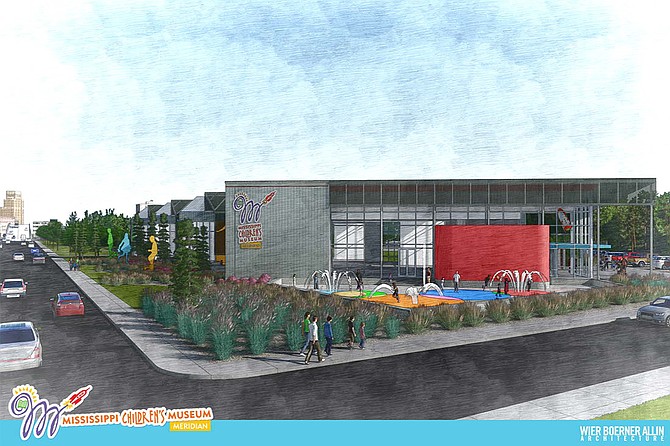 The Mississippi Children's Museum satellite in Meridian will be located inside a former Sears department store at 403 22nd Ave. in Meridian. Photo courtesy WBA Exterior Rendering

The Mississippi Children's Museum announced plans to construct a satellite location in Meridian on Nov. 7 at the Mississippi State University Riley Center. The new museum will be located on the site where an old Sears department store was at 403 22nd Ave. in Meridian.

"Community volunteers from Meridian came to us (a few years ago) and met with our president, (Susan Garrard), about opening a new Children's Museum," Mary Alex Thigpen, director of marketing for MCM, told the Jackson Free Press. "We ultimately decided to build a satellite location since the current museum already has a strong infrastructure and operating model, and launched a capital campaign to raise $13.5 million to start construction. As of this time, we still have $3.5 million left to raise, which we hope to accomplish by 2020."

Thigpen told the Jackson Free Press that the new MCM satellite will be 20,000 square feet and will include 9,500 square feet of exhibit space. It will feature three main galleries focused on health and nutrition, literacy and STEM subjects, as well as cultural exhibits on eastern Mississippi history throughout the museum.

"What's so great about this project is that it is the result of direct community support from families and local (organizations), and is completely volunteer driven," Thigpen said.

The Meridian MCM's developers have contracted Wier Boerner Allin, a Jackson architectural firm that has designed and constructed locations such as Babalu Tacos & Tapas, The Iron Horse Grill and The Apothecary at Brent's Drugs, to design the new museum. For more information, call 601-981-5469 or visit mschildrensmuseum.org/meridian.

Babalu Tapas & Tacos (622 Duling Ave.) will host Myles' Taco Shop on Wednesday, Nov. 29, in order to raise funds for 8-year-old Myles Davis, who is battling soft-tissue Ewing's sarcoma. The restaurant will donate $1 toward Davis' treatment for each taco sold during the all-day pop-up event.

Doctors diagnosed Davis with cancer in August 2017. He underwent surgery to remove a tumor growing in his hip, after which he began 36 weeks of chemotherapy to remove the remaining cancer cells in his body.

Babalu has hosted several pop-up taco shops to aid children in need over the past few years. Previous events have featured the child spending the afternoon as a "guest chef" at the restaurant and creating their own signature taco alongside Babalu chefs.

Iyanna Colly, who opened her Jackson-based travel agency Travel Addict in March 2017, plans to highlight the city's dining destinations and food culture with the launch of a vegan foodie tour in spring 2018.

"I want to build tourism in the Jackson metro by showing off all the cool and unique things we have here that millennials and other young folks would love to be exposed to," Colly told the Jackson Free Press. "Domestic travel is on the rise, so it's important right now to highlight our capital city."

Colly moved to Jackson from New Orleans, La., in 2009 and is a member of the Vegan Vibes foodie group. She told the Jackson Free Press that she will specially tailor her restaurant tour to members of Vegan Vibes and other vegan groups and will include visits to vegan eateries and juice bars, along with demonstrations on growing your own food and being health and environmentally conscious.

Travel Addict Travel Agency offers pre-arranged tours and custom packages catered toward clients with special interests, such as the Vegan Vibes group. Colly focuses on what she calls nontraditional vacation experiences, including visits to eateries, breweries, galleries and museums in Jackson. For more information, call 769-218-8402 or visit traveladdictta.com.

CORRECTIONS: The Mississippi Children's Museum blurb has been edited to reflect factcheck changes. Community volunteers in Meridian approached MCM a few years ago, not this year, about opening a satellite campus in the city. Also, the building will be located at the site where an old Sears building is, not in the building itself. The Jackson Free Press apologizes for these errors.