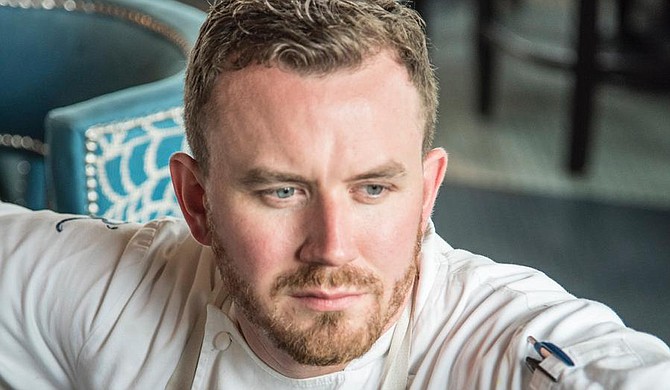 Simon Brown, who has served as executive sous chef at Seafood R’evolution (1000 Highland Colony Pkwy., Ridgeland) since 2015, accepted a promotion to the role of chef de cuisine at the restaurant on Saturday, March 18, replacing chef Payton Warren.

Brown developed a love of cooking watching his mother and grandmother at work in the kitchen. He started his career in the restaurant business as a dishwasher at a restaurant called the Ship Inn in his hometown of Dundee, Scotland, when he was 13 years old. Over the years, he taught himself to cook on his own time.

“We didn’t really have dedicated culinary schools in Scotland back then, just community colleges, so I was always learning more at work than I could at school,” Brown says. “I found that to make for better experience and training, anyway. Schools can teach you the basics and help you get a foundation in place to start developing your own style, but not about the pressures of the job, especially service.”

In 2008, Brown entered and won the Young Scottish Chef of the Year competition, in which he had to prepare several dishes with a mystery box of ingredients in under two hours. He later became the head chef at a French restaurant in Glasgow, Scotland, called La Vallee Blanche, which closed in 2014.

While in Glasgow, Brown met his wife, Jennifer Brown, who is from the United States, and the two moved to West Monroe, La., in 2011. In 2014, chefs John Folse and Rick Tramonto recruited Brown as part of Seafood R’evolution’s opening team.

As Seafood R’evolution’s new head chef, Brown says he plans to keep the restaurant focused on the community and locally sourced ingredients while also bringing his Scottish culinary roots to the table.

“Now that I’m at the helm, I can push some more Scottish and Irish dishes into our lineup and some European-style items, as well, while still making them with all local ingredients,” Brown says. “Overall, I consider myself an all-rounder in the kitchen, good at pastries and all sorts of other things in addition to seafood. However, seafood has always been big for me because it’s so big in Scotland. You get great shellfish and mollusk dishes over there, and all sorts of things besides.”