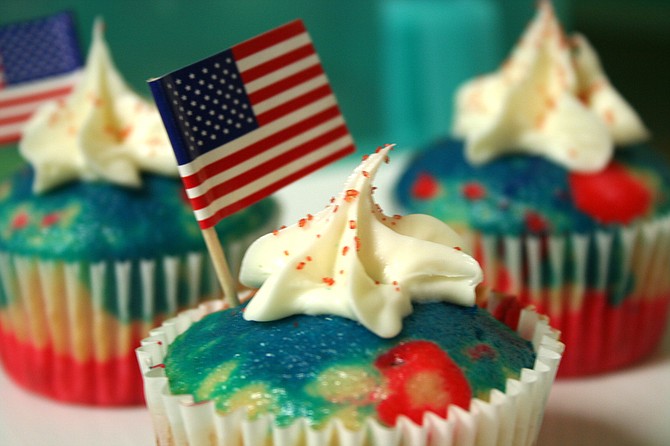 For the Fourth of July, Rainbow will hold a sale on grilling items as well as local grass-fed beef and meat substitutes for grilling.

Sugar Magnolia will prepare a special barbecue takeout menu for the Fourth of July that includes ribs, pulled pork sliders, baked beans, coleslaw and more. The restaurant will also have special red, white and blue iced cookies, cakes and other desserts.

Cookin' Up a Storm will have a special menu prepared for Independence Day that includes corn dip, Vidalia onion dip, deviled eggs, ham and Swiss sliders, potato salad, pork tenderloin with an apricot glaze and chicken quesadillas with a sour-cream dipping sauce.

Nandy's Candy will sell s'mores and chocolate stars during the week of July 4 and will also offer a buy-one-get-one-free deal on the business' Captain America snowball, which is a New Orleans-style snowball with red, white and blue stripes of strawberry, wedding cake and blue bubblegum flavor. Nandy's will be closed July 3 and 4.

Campbell's will have red, white and blue teacakes, petit fours and three-layer cakes for sale the week of July 4. The bakery is closed on July 3 and 4.

The Pig & Pint will be open on the Fourth of July and is currently taking catering orders for that weekend. For more information, visit pigandpint.com.

The Mississippi Sports Hall of Fame & Museum (1152 Lakeland Dr.) will host the 21st annual Farm Bureau Watermelon Classic on the Fourth of July starting at 7:30 a.m. The event features a 5K run and walk and the Blue Cross & Blue Shield of Mississippi One Mile Wellness Fun Run.

The 5K run begins at 7:30 a.m. and the walk begins at 7:35 a.m. The overall winner of each event will receive a gift card from Fleet Feet Sports, and prizes are also available for runners in various age categories. The event also features a costume contest after the race for runners who race in costume. All participants can enjoy watermelon and beverages after they finish. St. Dominic Hospital will provide popsicles for visitors, along with face painting and crafts for kids.  Packet pick-up for the event begins Wednesday, June 28, at 9 a.m. at the Mississippi Sports Hall of Fame & Museum. Registration for either the run or walk is $25, with the price increasing to $30 after June 30. To register visit msfame.com/2017watermelon.

Red, White and Blue Day at the Zoo

Visitors to the Jackson Zoo (2918 W. Capitol St.) wearing red, white and blue clothing (all three colors at the same time) on July 4 will receive a special admission price of $4 for both adults and kids.

The Mississippi Braves baseball team will host an Independence Day celebration on Monday, July 3, at Trustmark Park (1 Braves Blvd.) in conjunction with the Braves game against the Chattanooga Lookouts.

Gates open at 6 p.m., and the game begins at 7 p.m. The fireworks show begins as soon as the game ends. After the game the Braves will host a "Shirts Off Our Backs" silent auction for special Independence Day-themed Braves jerseys, with the winner of each jersey receiving it from the player it belongs to in person. All proceeds from the auction will benefit the ALS Foundation, which researches Lou Gehrig's disease.

For information or to purchase tickets, call 601-932-8788 or visit mississippibraves.com or the Mississippi Braves Facebook page.

Independence Day on the Rez

The sixth annual Independence Day celebration at the Ross Barnett Reservoir is a free event that will feature fireworks, kids' activities, food and drinks, craft vendors, live music and more. The event is Saturday, July 1, from 4 p.m. to 9 p.m. at Old Trace Park and Lakeshore Park on the reservoir.

The Town of Livingston (129 Mannsdale Road, Flora) is hosting its Independence Day celebration on Monday, July 3.

Doors open at 5 p.m., and the event begins at 6 p.m. It will also feature a fireworks show courtesy of Mercedes Benz of Jackson after sundown.

Tickets for the event are $15 before the event and $20 day of, with VIP tickets available for $100. The VIP package includes access to special parking and a VIP area at the event as well as special red and white wine and hors d'oeuvres from the Township of Livingston & Viking Cooking School at the onsite beer garden. Kids 10 and under get into the event free, and the event will also have free parking. Coolers and outside beverages are prohibited.

Ridgeland Recreation & Parks is hosting the 27th annual Celebrate America Balloon Glow on Friday, June 30, at Northpark Mall. The Balloon Glow is the opening event of the Mississippi Championship Hot Air Balloon Race and Festival in Canton and features 20 hot-air balloons decorated to twinkle and glow at dusk. The event will also feature live music, food, games and an evening fireworks show.

Before the balloon glow, the event also includes a karaoke contest at Burgers & Blues on Monday, June 26, and Tuesday, June 27. The winners of those rounds will advance to the finals on Wednesday, June 28, with the winner getting the opportunity to open the balloon glow event on June 30 from the main stage. Local bands and singer Joe Diffie will perform on stage after the opening.

Admission to the Celebrate America Balloon Glow is free. The event begins at 6 p.m., and the karaoke contest winner will perform at 6:30 p.m. The Balloon Glow begins at 7:45 p.m., and Joe Diffie takes the stage at 8:15 p.m. The fireworks show will begin at 9:30 p.m.

For information call the Ridgeland Recreation & Parks Department at 601-853-2011, visit www.ridgelandsportsandevents.com or find the event on Facebook.

On July 1, the Town of Lost Rabbit (147 Republic St., Madison) will host an event that will feature food trucks, fireworks, a free concert from Troy Laz and more. The event begins at 5 p.m.

On July 1, the City of Jackson Parks and Recreation Department will host a fireworks extravaganza at Smith-Will Stadium (1200 Lakeland Drive). The event will feature performances from local bands, dance groups and more, and will have food vendors on site. The gates open at 5 p.m., and the event begins at 7 p.m. Glass containers and coolers are not allowed.

Paul B Johnson State Park (319 Geiger Lake Rd., Hattiesburg) will host a fireworks display on July 4 starting at 9 p.m. The event will feature fire trucks, ambulances and Life Flight helicopters for children to learn about and meet the pilots, as well as barbecue and snowballs from Bad Boys Barbecue and Monkey Snowballs. The special event entrance fee is $6 per vehicle. For information visit mdwfp.com or call 601-582-7721.