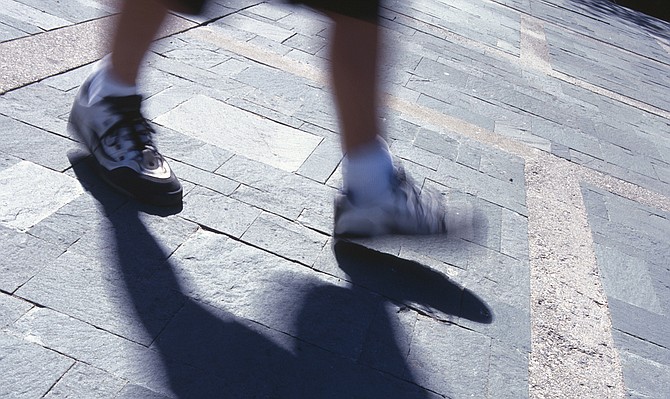 There aren't a lot of life lessons to gain from the 1998 teen horror flick "The Faculty." But when Elijah Wood's character says, "I don't think a person should run unless he's being chased," well, that's a message that just makes sense to me.

I'm not at Trumpian levels of denial, where I believe that the human body only has enough energy to scowl and rant on Twitter, but I definitely don't see running for dear life as a fun group hobby like some people do.

When I drive past a bunch of people sweating their faces off together on the trail beside the reservoir, I just imagine them trying to have a gasping conversation after. Pant. "You." Pant. "You guys want." Pant. "Want to get tapas?"

No one's been able to sell me on running, either, and believe me, they've tried. It's like when one of your friends starts binge-watching a terrible TV series and tries to convince everyone else to do the same, just so they aren't alone in their bad decisions.

"When you get to a certain point, running gives you this rush."

Sure, but so does coffee, and the threshold is a bit easier to reach.

At the same time, I want to be healthier, so I found a few exercise activities that I really like, chief among them kayaking and walking. The former is a bit tougher to work into my schedule regularly, as it requires good weather, a few hours of spare time and, you know, water.

But a few months ago, I started walking around downtown Jackson during my longer breaks at work, and it ended up being a first step toward healthier living across the board.

Like many people in office buildings across America, I was a lot more active before I got a desk job.

As a kid, I played football, baseball, basketball, tennis for about five days, and I skateboarded—slowly and cautiously and only in intervals of about 10 minutes at a time, so as not to get too confident.

When I had my first jobs at restaurants, I was on my feet for six or so hours per shift, and I was usually the guy that they asked to lift heavy things. It's not that I was super strong. It's just that no one else wanted to.

When I started work at the Jackson Free Press, I forgot the many warnings that "sitting is the silent killer," and used most of my lunch breaks to just kick back and relax. For almost two years, I spent a lot of my break time at work catching up on TV shows and trying to handle the other computer-bound business of life.

Here's what I learned, and what just about everyone knows but often forgets anyway: Relaxing can wear you out. I might not have been working on difficult tasks during those breaks, but I was still staring at screens and sitting down for long periods of time. When I got back to my desk, I wouldn't feel particularly rested or relaxed.

With just using some of my time to walk around town and get my eyes off a screen for a bit, I was surprised at how big of a difference it made in the energy that I had. So don't get me wrong—getting a few minutes away from phones and computers is definitely essential. However, I was recently reminded that some people see technology as the main source of health problems rather than the sedentary lifestyle they contribute to.

I was riding down to our building's lobby in the elevator (don't judge me; we're 13 floors up), when three people stepped in who were having a conversation about how people used to be more active.

One woman made a comment that it's technology that is keeping people from being healthy and happy. As I was in the middle of using my phone, that kind of stuck out as, "Hey, she's talking about you, dude," so I began to pay attention.

"When we were growing up, we were outside," she told her co-workers. "We didn't have all these computers and video games and phones. We actually talked to people and went places."

"That sounds terrible," I responded. Just joking, of course.

Even after everyone parted ways at the ground floor, I was thinking about what she said. There's certainly some truth to it, but there's also some pretty intense selection bias happening, right?

Technology, in general, makes our lives a lot easier, which can make for less active people. But for most of us, our daily lives also include diet and exercise, and it can be a literal lifesaver in those areas.

In some cases, technology has a direct positive effect on my health, as with the step counter on my phone and Pokemon Go (yes, I know that it's not trendy anymore; I still like the app), and an indirect effect in others. For instance, listening to music or podcasts keeps me occupied while I'm walking during my breaks or at the gym so that I won't get bored and call it quits. On several occasions, podcasts that I follow have had guests discuss their health choices, which then inspired me to try new approaches to eating and exercising.

Oh, and when I was on my phone in the elevator, I was logging what I had for lunch into a calorie-counter app called MyFitnessPal, which alerts me if I'm getting close to my limit on carbohydrates, sugars, fats or proteins. Before I had the app, I really didn't consider the many factors in a healthy diet. I just stayed away from high-calorie foods—hardly all I needed to make the right eating decisions.

Technology and healthy living aren't at odds with each other, even if we sometimes see it that way. Like most things, I think the key is moderation. You don't have to pile up all your electronics and light a match, and you don't have to make running your exercise method of choice if you don't enjoy it at all. Finding activities that you're passionate about is a big part of being happy, which in turn is a big part of your overall health.

I may be a ways from my goals still, but the fact that I'm actually enjoying the journey ensures that I'll get there.