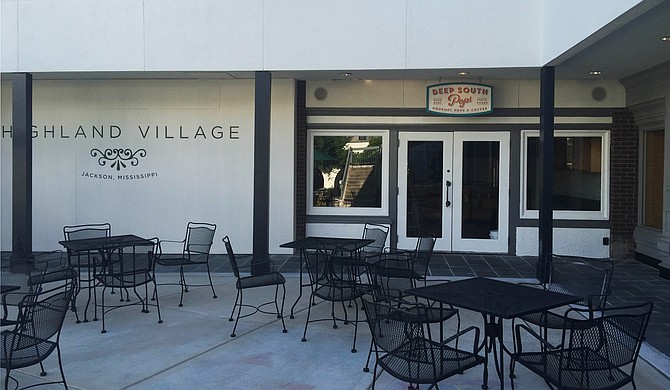 JACKSON — Deep South Pops (1800 N. State St.), an artisanal shop that sells organic ice pops made with local ingredients, in addition to coffee, gelato, baked goods and more, will open a new location at Highland Village in two weeks. The new location will offer the same menu as the original, including Mississippi Coffee Company coffee and nitro coffee and kombucha tea from Cascade on Tap, ice cream and sorbet from Sweet Magnolia Ice Cream Company, and pastries from La Brioche bakery in Fondren.

The new Deep South Pops, which is about 700 square feet and includes outdoor seating, will be located in Suite 173 at Highland Village.

Owners Jake and Kristy Franklin will host a bingo night for the grand opening of the new location, with plans to make bingo nights a monthly event. The Highland Village location will also periodically feature live music in the courtyard.

On Sept. 29, Brent's Drugs (655 Duling Ave.) in Fondren will host a party to mark the popular Jackson restaurant's 70-year anniversary. The restaurant, which was once a pharmacy and soda fountain opened by Jackson pharmacist Alvin Brent, has been in business since 1946. Brad Reeves, the current owner of Brent's, opened The Apothecary, a 1,000-square-foot "speakeasy"-style lounge, as an addition to the restaurant in June 2013.

Brent owned and ran the pharmacy until 1977, when he sold it to pharmacists Paul Heflin and Bob Grantham, who had worked at Brent's since 1951. Pharmacist Randy Calvert acquired Brent's in 1995 and sold the pharmacy in April 2009. Reeves obtained Brent's in July 2009, and partners Jonathan Shull and Amanda and Nathan Wells came on board in 2014.

For the anniversary party, the restaurant will remain open until 8 p.m. and the Apothecary will be open until 10 p.m. that night.

The celebration will include a birthday cake from Campbell's Bakery, specialty "boozy" alcoholic milkshakes for adults, face painting for children and live music from The Hustlers.

"It's a big deal for a restaurant to last this long," Wells said. "For us, it's all thanks to the community support we've received, and we're celebrating that."

Baker Donelson Law Firm Ranks among Top 10 in the Country

Baker Donelson, a Jackson-based law firm that focuses on recruiting, developing and retaining employees from diverse backgrounds, was ranked ninth in the country in the 2017 edition of Vault, Inc.'s "Best Law Firms for Diversity," a release from the law firm said.

The Mississippi Development Authority will host Doing Business with Cuba, a one-day seminar on taking advantage of newly available trade opportunities with Cuba in light of normalized relations with the country. The seminar is scheduled for Thursday, Oct. 20, from 8:30 a.m. to 4 p.m. at The South Warehouse (627 E. Silas Brown St.) in Jackson.

Speakers at the summit include leaders in Cuba's corporate banking and international trade sectors, infrastructure and energy sectors, and agriculture, commodities and mining sectors, an MDA release says.

Topics to be covered include:

The cost to attend is $40, which includes lunch. Space is limited and offered on a first-come, first-served basis, so early registration is recommended. The deadline to register is Oct. 3. To register, visit http://bit.ly/2c1jyjM.

For more information, contact MDA's Latin America Trade Specialist Luigi Dominighini at 601-359-9429 or [email protected], or visit mississippi.org to learn more about the agency's international marketing services and events, or to request a consultation with an international trade specialist.