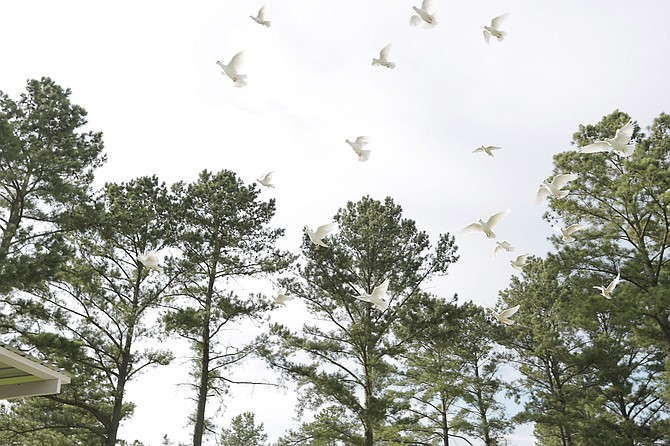 A couple has just said heart-wrenching vows and exchanged rings. After walking down the aisle together, they step outside for one more wedding ritual. As the wedding party counts down from five and the couple look to the skies, two white doves fly out of a small cage and soar into the clouds.

Terrence and Rotoniya Kendrick, Mississippi natives and owners of Perfect Flight White Dove Releases, have started giving events a special touch. Perfect Flight began in Farmhaven, Miss., which is about 10.5 miles northeast of Canton, in July 2014. The couple started out raising chickens, but a neighbor, Albert Brown, later introduced them to pigeons. Brown showed them how to train and care for the birds, which later motivated the Kendricks to start their dove-releasing business.

"(Brown) made me look at it from a fun perspective," Terrence says.

Terrence says he has loved birds since he was a kid.

"We've had all kinds of birds-—parakeets, ducks, turkeys and guineas, which are a type of fowl," he says. 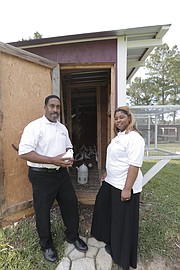 His passion for managing his own business and building something from the ground up now is in full flight. The Kendricks have a total of 70 pigeons with 20 new birds arriving soon. Their goal is to reach 100 birds by the end of September.

The average number of doves released is three, with four for funerals and two for weddings. The most doves they have released at once was nine.

Although the Kendricks often work ceremonials events like weddings and funerals, they are not limited to any specific type of affair. They can release doves at varied events such as birthdays, 5Ks and  memorials.

The Kendricks have a precise way of pampering and training their nest of feathered friends. The monthly upkeep consists of deworming and medicating each pigeon for salmonella and other diseases. To keep them clean, the Kendricks simply set a pan of water out, and the pigeons dive in for a nice bird bath.

"It's important to keep a routine regiment to keep your birds healthy because they often come in contact with many other birds in flight,"  Terrence says.

Training for the birds starts while they are young. They are kept locked away for a certain amount of time, and the Kendricks only let them out when it's feeding time.

The more the birds fly out, the more they will get used to their environment, which makes it easier for them to find their way home. Terrence also has whistles that trigger them to fly back home.

Although they take flight often, they sometimes become skittish. The Kendricks get a laugh at the pigeons unexpectedly becoming slightly fearful of flying out and deciding that they do not want to fly on cue.

Pigeons have a great sense of direction and know when and where to come back, Terrence says.

"It's a God-given instinct that they have, that scientists have yet to figure out," Terrence says.

As with many jobs, the couple's field of work has an unpleasant side. Often, when the pigeons are released at some events, they do not return on the same day. Luckily for the Kendricks, the pigeons legs now have bands, which have numbers in case the birds are found. In other cases, some pigeons fall prey to larger birds, but Terrence says that if you keep the pigeons healthy, they'll find a way home.

The Kendricks tell a story about a woman who was a paraplegic who made plans to have doves released at her funeral.

However, instead of waiting until her funeral, she had the birds released outside of her home for both her and her daughter to enjoy.

"The best part about our job is seeing smiles and the joy on people's face as they watch the doves fly," Rotoniya says.

When they are not releasing birds, the Kendricks tend to their eight acres of land, organizing their garden or raising their chickens, something they consider everyday life.