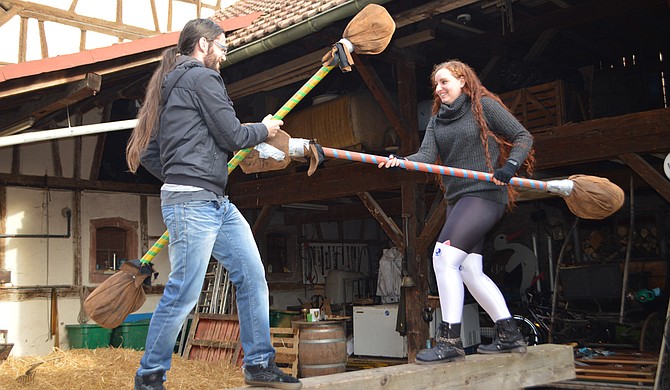 Falconh, the Holy Paladin, stood at rest amidst the bodies of the undead he had slain protecting Gallandriana. With his flaming sword by his side, his blue eyes scanned the horizon for her return.

The modem screeched, and 16-year-old Heather Valdez (now Berthereau) was back in the game! "Oh my God" she exclaimed. "He waited for me!"

"Call waiting was the worst," she says.

"EverQuest," a 3-D fantasy game, was one of the first massive multiplayer online role-playing games. Heather began playing the game around 2001. In the original game, players chose an avatar with specific skills, customize its appearance and join guilds to participate in various quests. Heather, whose avatar was Gallandriana, was on a quest for her class, and Falconh, who wanted to join the guild she was in, had been given the task of supporting her.

In the early days of the game, the somewhat fragile connection to the server was over a telephone line. Call waiting would close the connection to the game and disconnect you. And unfortunately, in "EverQuest," if your character was not in a safe place when disconnected, the player could still be attacked and killed by the undead, and then the quest would have to begin again.

Heather's English after having lived in France for 10 years sounds like it has been pickled in French. It has a French lilt to it, and the rough English edges have been smoothed off, including any trace of her Castroville, Texas, heritage. Occasionally, her word order is also a little unusual. She claims to be half Hispanic, but there's little to validate that in her appearance. She has a fair-freckled complexion with waist-length, wavy, bright-red hair. She has bit of a gothic element about her, with several discreet piercings. During this interview, she is wearing no makeup and has on a black T-shirt with the logo of a metal band on the front, black shorts and socks, and military-style boots.

Falconh's patience in waiting for her return and the defense of her avatar touched her lonely teenage soul deeply. The two had begun an unlikely friendship over the Internet and, unbeknownst to her at the time, across the big pond. Their friendship grew as they typed their messages in the "EverQuest" chat room, as they worked and fought together on their quest.

It turned out that Falconh, whose real name was Alexandre Berthereau, was only a year older.

He lived in Colmar, France, and time-wise, he was seven hours ahead. This meant that Alex often had to forgo sleep in order to be online with Heather, and she enjoyed and appreciated the attention.

Like many American teenagers, when she graduated from high school, she was not getting along well with her parents and was depressed and anxious about her future. With no money available, college was not an option and working in a fast-food restaurant was not going to bring her the kind of future of which she dreamed, nor the independence for which she desperately longed.

Alexandre, sensing her mood from half a world away, worried about her. Wanting to advance their relationship to a new level, he offered to come to Texas for a visit.

Heather was thrilled but panicked, thinking of the difficulties involved. Her mother, the major problem, had never heard of Alexandre, nor had any idea of how much time Heather spent online with him.

Since she was adept at creating online personalities, it wasn't difficult for her to imagine a fictional past for Alexandre. He became a former French exchange student from her high school who was returning for a visit. But the cover was almost blown when Heather, whose mother accompanied her that day, walked right past Alexandre in the airport without recognition. It was her mother who pointed him out as he waved at them as they walked by. He had sent a picture, but it was of a group of young men, and she wasn't sure which one was him. He would be wearing a sweater, he had told her, but it was Texas in the summer time, and he wasn't wearing one.

Used to big, brown, boisterous American men, Heather realized that Alexandre was not like that; he was slim, pale, quiet, introverted, socially awkward and quintessentially French. She says it was a good thing they met over the Internet, as she would never have been attracted to him if they had first met in person.

The next few days were awkward. He stayed in the only hotel in Castroville. His spoken English was not as good as his written English, and he mumbled badly. The defining moment of the trip came on a visit to SeaWorld with some of her friends. As was her custom, Heather smothered a hamburger in ketchup and mayonnaise and Alexandre, being French, was a little revolted by the conglomeration. He told her it was disgusting. Heather took offense, thinking he was implying she was disgusting, picked up her hamburger and moved to another table to be by herself. Alexandre soon followed and apologized, explaining that he meant that the hamburger was disgusting and not her personally. Then he kissed her—the first time she had ever been kissed by a boy.

Alexandre went home, but it wasn't long before he asked her to come visit him in France. Eventually, she took him up on his offer and traveled to Alsace, a beautiful and historic area full of vineyards, castles, gothic churches, small cars—and a long way from Texas. Though it was an unfamiliar country to her, she found some similarities between Alsace and her hometown of Castroville, known as the "Little Alsace of Texas." The first Europeans to settle in the area were recruited from Alsace in the 1840s. Many of the buildings in the town were built in the Alsace tradition with sloping roofs, half-timbered construction with exposed beams and multiple levels with the sous sol (basement) half-buried. Even the local language, Alsation, that many in Colmar spoke was familiar. Although, she had thought it a dying language, as only the very old spoke it in Texas.

Like Alexandre's arrival in the U.S., they had to make a few necessary adjustments. He lived in a small apartment with his mother, so small in fact that she was expected to stay in Alexandre's room with him (he slept on the floor). Heather spoke no French; Alexandre's mother spoke no English.

In fact, few people spoke English, and because Alexandre worked during the day, Heather was left alone for long periods of time and was very isolated. But it was a special time, and her love for Alexandre grew, as did the realization that he was the one for her.

She went back to Texas after 90 days when her visitor visa expired. But she returned to France as soon as she was legally able, which was another 90 days. This continued until they both realized that they were just working to buy the next plane ticket. Then one day he causally asked, "Do you want to marry me?" At first she thought it was hypothetical, since English speakers tend to ask, "Will you marry me?" What he had asked was a literal translation of the proposal question in French.

She answered, "Well, sure." From his reaction, she could tell he was actually asking her to marry him.

Twelve years have passed, and Heather and Alexandre have made a life for themselves, which includes a beautiful little girl named Riley. Heather now speaks French, which she claims to have learned "mostly from watching the Simpsons dubbed into French." They live in Colmar, France, but are planning to move to Texas so that Riley can get to know Heather's side of the family.