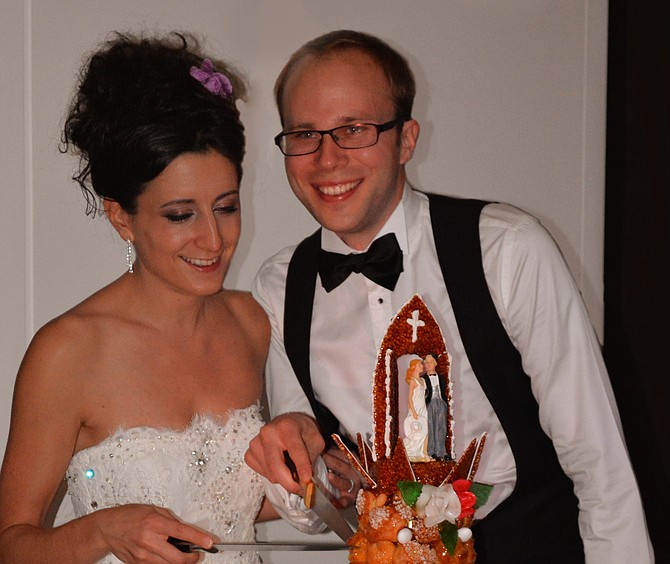 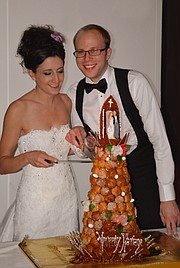 As I glanced at the menu, I groaned inwardly. We had two more courses to go--a "soupe de fruits rouges" and a "piece montee." It already felt like the wedding was yesterday. "Close," I thought. It was 11:30 p.m.

The wedding had started at 2:30 p.m. that afternoon. The ceremony was about 50 kilometers, or 31 miles, from Strasbourg, where we currently live, so we had to rent a car to get there. Denver, our 11-year-old, had Saturday school until noon so we had to wait for her, pick up the car, figure out how to get the GPS to speak English and get to Selestat, before about 2:15 p.m.

Converting the GPS to speak American was our first mistake. Our avatar's name was Eloise, and I think ours was alive with plenty of French attitude. You know when how you miss a turn, the GPS voice says "recalculating" and then very pleasantly gives new instructions? Well, ours got angry! You could hear it in her voice, and if we did not immediately follow the new instructions, her voice got thinner and angrier. In one long stretch, I swear she began muttering imprecations in French, and there was something about that fool Lafayette and how he should have left well enough alone.

We made it to the place where we were supposed to park by 2 p.m., and then a nice, young couple led us through the warren of narrow streets to the center of town. We turned a corner and, suddenly, we were in the town square. There stood Ludovic Paul, the groom, in a tuxedo, and Cecile Klein, the bride, wearing a beautiful white wedding with sequins, bare shoulders and a small train. It fit snugly to her lithe frame. With her olive skin and dark hair and eyes, she was a dream. Her long hair was piled on top of her head with a pinkish-red flower on the left side, her veil interwoven in it. No one was dressed as well as the bride and groom.

I met Ludovic in 2006 when he came to Mississippi to do an internship with me at the U.S. Geological Survey, and we became fast friends. I met Cecile a couple of times over the years on brief trips to France, but it was only a fortuitous chance that my time in France coincided with their wedding.

A few minutes later, we were all ushered into the town hall and to a rectangular conference room with a few chairs that faced a long table. The mayor, wearing a gray suit with a red, white and blue sash, sat across the table from the bride and groom, each flanked by  two friends.

The mayor welcomed everyone to the ceremony. He told a few jokes and then went through the paperwork in front of him, asking Ludovic and Cecile questions from time to time, which they mostly answered with "Oui."

Everyone clapped when the mayor finished, and the bride, groom, mayor and the four official witnesses got up and signed the register.

We assembled in the town square and followed the bride and groom to the sound of bells through the narrow streets to the local church, a massive stone structure with a history dating to the 13th century, its thick walls towering over us with a series of long and narrow stained-glass windows around the top.

The pastor, wearing a plain black cassock and a pilgrim-like white tie, met us in front of the church and signaled for us to proceed into the building. The inside was surprisingly small, with long narrow benches that have hot-water pipes running underneath them. The eerie reflection of the stained glass windows moved along the east wall as the sun set.

The pastor was a jolly sort, with a great and enthusiastic smile and sparkling eyes, and though he loved to sing loud and robustly, he was not really good at it. An unseen organist in the balcony accompanied him. Communication seemed to be difficult, since the pastor was making multiple hand signals and looking into the balcony in frustration as he tried to start or stop the music.

The bride's father walked her down the aisle, and she joined the groom to the right of the altar. Soon, the witnesses--a different set from the civil ceremony--got up from the pews and joined the bride and groom in the front of the church as the couple said their vows.

Then, the wedding was over, and the bride and groom processed down the aisle to a recording of Marvin Gaye's "Little Darling." We all gathered in the church's courtyard for handshaking, lots of kissing and many pictures.

After the wedding, we drove through the fabulous wine country in the Alsace region of France to the Chateau Du Hohlandsbourg, a 13th-century castle perched on top of a hill overlooking the Rhine Valley. Walking the ramparts of the castle 40 meters (about 131 feet) off the ground with a clear view of the valley as the sun set gave me chills.

The reception was wonderful--lots of games, dancing, food and drink. A few minutes after midnight, the "cake" was served. It wasn't really a cake, but rather what looked like caramel-covered donut holes filled with cream that were glued to a conical support. Fireworks accompanied the cake as servers brought it out. The bride and groom "carved" the cake with decorative serving knives.

Just as I was about to give up, I saw the first guests saying their goodbyes. We quickly joined them, said our goodbyes, found our way down the mountain in the complete darkness and made it home by 3 a.m. and slept the sleep only the truly exhausted know.

We did not make it back for the 11:30 a.m. brunch and found out later that the bride and groom had danced until 4 a.m. Next time, I'll be better prepared.