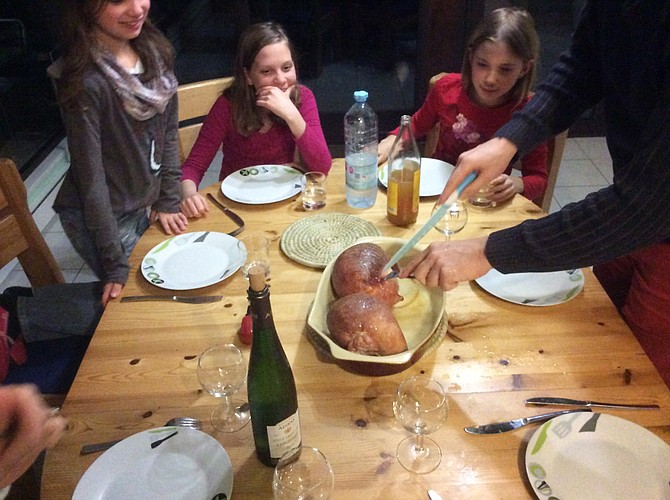 Andre brought dinner to the table. Swallowing hard when I saw the meal, I tried my best to look nonchalant and be open and ready for a new taste. Just out of the oven, they looked rather unoffending. Steaming a little, they were about the size, shape and color of a couple of volleyballs. This was a traditional Alsatian meal, Andre told us with pride—one that his mother, a marvelous cook by all accounts, used to make for him when he was a child.

"You can't find this much anymore," Andre said. "I saw it at a local butcher's when we were picking up supplies for the house."

We were spending a few days in the mountains of Northern Alsace in the Parc naturel regional des Vosges du Nord (Northern Vosges Regional Nature Park). The park abuts the Palatinate Forest in southwestern Germany and is about an hour's drive north of Strasbourg, France.

Low but steep-sided mountains, many with sandstone outcroppings protruding from their eroded surfaces, compose the area. People can still explore the haunted ruins of old castles on the outcroppings. The soils are sandy, and many of the trees are pines, as well as some hardwoods. Timber is an important industry in the area, as evidenced from the number of lumber mills we saw as we drove through the small villages and the huge stockpiles of neatly cut wood for use in heating homes. Mixed into this scene are chipped and moss-covered concrete bunkers and gun installations that were part of the Maginot line. With the rain, the whole area had a gloomy, spooky feel.

There were seven of us in this little rented house: Andre and his wife, Nicole, and their two daughters, Elinor and Alix, ages 10 and 7, respectively, and me, my wife and 12-year-old daughter. Andre was cooking the first night. When I had asked what we were having, he said "estomac de porc farci." My French isn't great, but I caught the word "porc" which is "pork" in English, and I knew that "farci" meant stuffed. Stuffed pork didn't sound so bad, but the first word bothered me. My heart skipped a beat, my stomach gurgled, and a little bile crept into the back of my throat when I realized that he was indeed serving stuffed pig stomach. "Stuffed with what?" I asked myself, and then determined that I wasn't going to ask until after I ate it.

I was doomed, though, and I knew it. We made a big deal with our children when they were young that whatever a host serves you, you will eat and will be happy about it. I knew my children would never let me live this down if I choked.

My oldest daughter spent her last year of high school living with a family in a rural town in Ecuador, and it became a family joke to serve her dinner without telling her what it was until after she ate it. She related, with some pride, that she could eat everything they served, including fried Guinea pig, except for the dish made from horse's hooves.

"It was way too gelatinous" she said in a voice tinged with regret.

The actual eating of estomac de porc farci was anticlimactic. The stuffing, which was made from leeks, potatoes, onions, some minced pork, and other herbs and spices, was pretty good. The stomach itself seemed a little tough and chewy and not very tasty. Everyone passed their piece of the stomach to Andre until he said he had enough. My daughter had a second helping of the stuffing.

As Andre ate the dish, he seemed to relax, and his eyes drifted off as remembered his childhood. Andre wanting to share his heritage and upbringing with his American friends as well as his family made him vulnerable when he cooked and served a meal that was important to him. The good-natured teasing and the squealing and wonder of the children when he cut into the pork stomach was worth a dozen excellent meals in an expensive restaurant.

The meal was magical—not the food particularly, but the camaraderie of a shared experience.