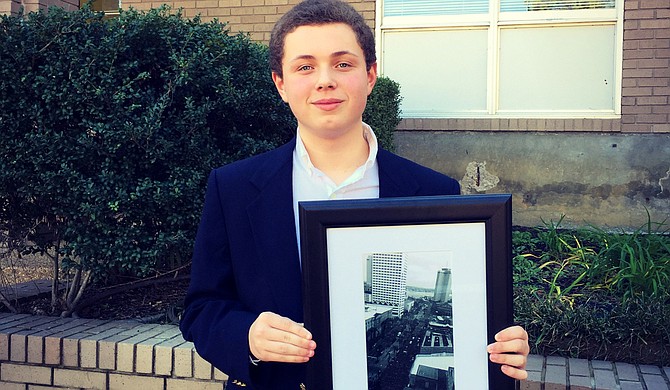 Adam Noone, a 14-year-old Belhaven resident and a student at the Education Center School (4080 Old Canton Road, 601-982-2812), was spending Thanksgiving 2015 with his father, Chris Noone, in New Orleans when he took a photograph that now has him poised to participate in a national art competition in New York City. The photo, taken from the window of Noone’s room on the top floor of the Sheraton New Orleans Hotel on Canal Street, was one of 160 works from students across the state that won a Gold Key award in the Scholastic Art Awards of 2016 Mississippi Regional Competition in January.

“Honestly, it was surprising for me when I did so well,” Noone said. “The photo just sort of happened. There was a Thanksgiving Day parade going on outside, (and) I decided to take a picture of it. The time of day I took it at made the photo look hazy in color, so I thought putting a black and white filter on it would make it look a lot better.”

Noone said that he has a casual interest in photography and submitted his photo for the museum’s art show along with the rest of his classmates in art teacher Ariel Riche’s class at the Education Center School, which is an all-grades private school. 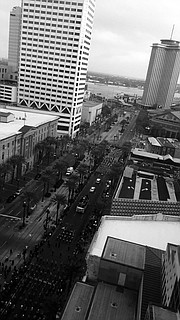 The Scholastic Art Awards exhibition, on display through March 6 at the Mississippi Museum of Art in the Donna and Jim Barksdale Galleries for Changing Exhibitions, features more than 1,800 art pieces from students in grades seven through 12 across the state. Of those, 289 works received honorable mention, 121 received a Silver Key award, and 160 works received a Gold Key. Every year, participants that receive a Gold Key award go on to the national competition in New York City, where they will contend with students from 80 other regions across the U.S.

“I couldn’t believe it at first when I entered the event and won a Gold Key,” Noone said. “A lot of people thought my picture was cool, and just as many were surprised that a picture that wasn’t professionally taken turned out so well.”

Noone, who is in ninth grade, plays baseball and football in his free time and hopes to win a scholarship in the national competition in New York so he can study journalism at the University of Mississippi and pursue a career in sports broadcasting.

“I’m a big football fan, and I love Ole Miss and the Rebels more than anything,” Noone said. “Even if they don’t have the best journalism school in the country, that’s still my school and where I want to go.”

For more information on the exhibit, visit msmuseumart.org.