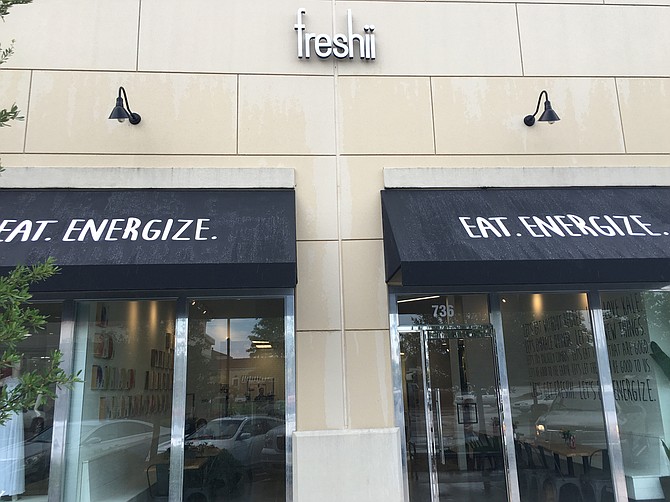 Freshii's menu includes items such as wraps, yogurt, salads, smoothies, burritos, and vegetable and fruit juices. Customers can create their own custom orders from any ingredient, even with dishes such as soup. Photo courtesy Freshii

JACKSON — John Newcomb, the nephew of Newk's Eatery owner Don Newcomb, made his own entry into the restaurant business last week with the opening of Mississippi's first Freshii in Flowood (748 MacKenzie Lane). Freshii is a restaurant franchise dedicated to using entirely fresh ingredients with nothing fried or frozen.

John Newcomb, the nephew of Newk's Eatery owner Don Newcomb, made his own entry into the restaurant business last week with the opening of Mississippi's first Freshii in Flowood. Photo courtesy John Newcomb

"We don't even have a freezer here in the restaurant," Newcomb said. "We get all of our ingredients from local farms and ranches every day. I've worked as a farmer outside of Yazoo City for 30 years, so I know the value of fresh food."

Freshii's menu includes items such as wraps, yogurt, salads, smoothies, burritos, and vegetable and fruit juices. Customers can create their own custom orders from any ingredient, even with dishes such as soup. In addition to using all fresh food, Freshii also uses biodegradable bowls and utensils for the sake of the environment and donates part of all sales toward setting up gardens and food centers in Africa.

"When I decided to open a restaurant, I was looking to bring something to Mississippi that offered healthy alternative dining and was also something new," Newcomb said. "Mississippi always comes either in last or second to last in the nation on things like obesity, and I thought something like Freshii was just what Mississippi needs. I started working to open this Freshii in fall 2014 and plan to open another in the District at Eastover in spring next year and a location in Oxford by next summer."

Freshii is open from 8 a.m. to 9 p.m. every day. For more information, visit freshii.com. Freshii also has an app available for iPhone and Android that displays a menu and allows customers to place their orders through the app.

The Mississippi Contemporary Art Center, an organization dedicated to creating a space for emerging contemporary artists in the state, began operations in July with the signing of its first represented artist, Jackson resident TJ Legler, who creates light paintings by setting steel wool on fire and spinning it, and then photographing it. MCAC will debut Legler with its first art show, "Start the Fire," which will be on display Nov. 10 through Jan. 7, 2017, at Coalesce (109 N. State St.).

MCAC is searching for Mississippi artists who specialize in more experimental and conceptual styles, and will promote and support these emerging artists, providing venues for them to display their work, MCAC Director of Programming Steve Clark told the Jackson Free Press.

"We're sending scouting teams around the state looking for young emerging artists—people with a strong visual vocabulary who are making strong statements with their art," he said.

MCAC currently has plans to represent four other artists and will announce them ahead of its second art show, which will take place in January 2017.

"These first shows we have planned will heavily involve the local community for things such as helping to get artists set up in unused spaces around Jackson for pop-up shows until MCAC can open its own dedicated space," Clark said. "We're also working with the Greater Jackson Arts Council to help our emerging artists get as much community exposure as possible."

To learn more about MCAC and Legler's upcoming show, visit MCAC's website. To submit work for consideration, email [email protected]. MCAC will also provide regular updates on this and future shows on its Twitter page.

Luis Ortiz opened Las Palmas Mexican Grill (823 S. Wheatley St., Ridgeland) at the beginning of August in a building that he remodeled with decorations and furnishings he brought with him from Mexico when he moved to Ridgeland. The restaurant has 40 tables and a full bar that offers two-for-one margaritas all day and two-for-one 16-ounce draft beers from 4 to 7 p.m. every day.