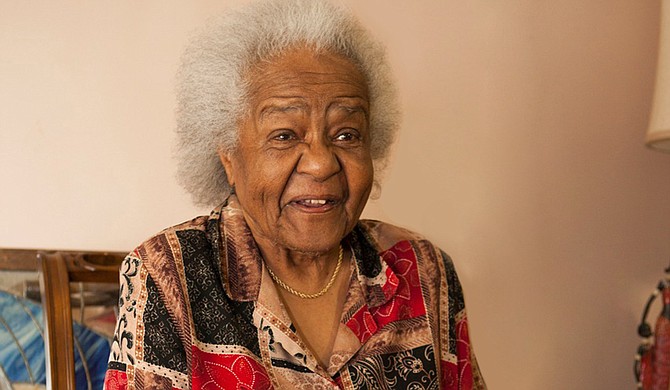 In the chaos of Hurricane Katrina, while living in a temporary shelter, Caesar Marshall had a heart attack and had to be transported to Mobile, Ala. Caesar's wife, Mae Beth, wasn't allowed to go with him.

"I had to wait until my son and his friend came down to get me to take me to where my husband was," Mae Beth would later recall.   As if recovering from a heart attack wasn't bad enough, the Marshalls returned to their Pass Christian home to survey the wreckage.

"[I] found some pictures and a scrapbook ... the water hadn't damaged" in her home's rubble, she says. "Had papers from my mother-in law and my momma from the1800s; they were all wet. I kept them, even though you can't read them." 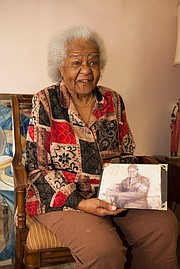 After Katrina, this photograph was among the only items Mae Beth Marshall recovered from her Pass Christian home. Eventually, with help from HOPE Enterprise Corp., she and her husband, Caesar (pictured in the photo), were able to rebuild on the same spot where their house once stood. Photo Courtesy Hope Enterprise Corp.

Marshall had grown up on the Gulf Coast but moved to New York City, where she worked as a computer operator; she and her husband moved back home to Pass Christian in the 1980s to help care for her mother-in-law. Even though Katrina had destroyed their house and the memories in it, Marshall wanted to return home.

However, re-housing residents along the Mississippi coast would become the most daunting problem of the recovery—logistically and politically speaking. In his recent book, "America's Great Storm," then-Gov. Haley Barbour writes of Katrina on the coast: "By the second week, housing had become the critical issue, and it stayed the pivotal issue every week for the next three or four years."

Barbour devotes a little over three pages of the book, which Democratic strategist Jere Nash co-wrote, to housing challenges in the immediate aftermath of the hurricane, focusing mostly on the handwringing over where to put federal relief workers and debris-removal crews. The upper floors of Biloxi's Imperial Palace Casino Hotel was the first hotel to reopen on the coast, while the U.S. Navy sent a hospital ship to care for and house sick people; plus, there were the inadequate trailers the Federal Emergency Management Agency provided.

Still, many on the coast believed federal and state officials, including Barbour, ignored the needs of lower-income residents. Advocates for low-income Mississippians argue that initial housing-recovery programs were full of gaps created when Barbour successfully asked the federal government to waive provisions requiring a portion of recovery funds to go to low- and moderate-income people like Mae Beth and Caesar Marshall.

Katrina recovery funds poured into Mississippi, injecting as much cash into the coast's economy as a typical Mississippi state budget. To make sure poor people without political clout received their fair share, three nonprofits—Hope Enterprise Corporation, the Mississippi Center for Justice and Mississippi State Conference of the NAACP—joined forces and now, 10 years later, are telling a story of Katrina's recovery that is in stark contrast to Barbour's version.

For the past 10 years, Gov. Barbour has beamed about how much better Mississippi, under his leadership, responded to Katrina than officials in neighboring Louisiana.

"The state publicized its success very strongly all along the processes," said Reilly Morse, executive director of the Mississippi Center for Justice. "And it did some things right; it got some important pieces of the recovery right pretty early on. But it also made some high-level mistakes."

Katrina slammed ashore in Mississippi as a Category 3 hurricane on Aug. 29, 2005, damaging more than 65,000 homes and causing $125 billion in damage. One month later, Hurricane Rita hit. The storms prompted Congress to appropriate $5.5 billion in community development block (CDBG) grant funding to Mississippi for building and recovery, including for affordable housing. However, Mississippi decided to "reprogram" the funds, which should have gone to rebuilding poor neighborhoods, to the Port of Gulfport expansion project on the promise of creating 2,586 jobs by 2015.

Civil-rights organizations said they could not stand for it. In December 2008, the Mississippi Center for Justice, on behalf of the Mississippi State Conference of the NAACP, Gulf Coast Fair Housing Center and several individual residents sued HUD for approving the plan, which they believed would continue residential segregation.

"In a disaster, when you're rebuilding, the question is going to be: Are you going to rebuild the pattern of racial segregation that was there before, or are you going to try to move people to higher-opportunity locations, create a little more racial integration? For the most part, Mississippi chose to reproduce the pre-existing patterns," Morse said.

The challenges went beyond housing. Many of Mississippi's post-Katrina policies continued to fuel socioeconomic and racial disparities in housing, employment and opportunity. Carol Burnett, executive director of the Mississippi Low Income Childcare Initiative, said child care was originally not part of the recovery plan. However, while several groups, including Chevron, which needed child-care centers to reopen so their workers could return to the job, helped get centers up and going again; many mom-and-pop centers could not reopen, she said.

Eventually, the MCJ and HUD settled by getting an additional $132 million in disaster recovery funds set aside for lower-income households in south Mississippi. Two years after the settlement, the MCJ estimated that well over 5,000 Mississippi households lack permanent affordable housing, "due to unjust decisions by Mississippi policymakers, irrational interpretation of federal audit, elevation, and environmental rules, and discriminatory zoning decisions by local governments."

As of this year, Morse said, 4,500 people still needing housing assistance—and Mississippi has the money to do something about it. Records show Mississippi is still sitting on a half-billion dollars in federal recovery funds. Information from the Mississippi Development Authority shows that of the $5.48 billion in Katrina CDBG disaster-recovery funds allocated to the state, just under $5 billion has been spent through March 31. The bulk of the funds were to go for homeowners assistance and economic development.

"More than 99 percent of the recovery funds are obligated, with more than 90 percent disbursed," said Marlo Dorsey, an MDA spokeswoman. "The remaining funds are allocated to large infrastructure projects such as Port of Gulfport and other infrastructure projects. We are comfortable with the status of these recovery dollars, as these larger projects were expected to be the last items completed under comprehensive recovery."

Still, Morse credits the state for making quiet progress after the settlement with HUD and despite the port expansion controversy.

"The way it stands now, because we succeed in getting those changes (to the recovery plan), the completion of that is happening under the radar in Mississippi. It's also something the state, for whatever reason, isn't all that ready to congratulate itself for. I think that's kind of odd since its a large number of folks that they've helped, and they've done it successfully. It's created a lot of jobs. The reason I can come up with is that they don't want to acknowledge that they made a mistake in the first place, and they're now correcting it this many years later," he said. 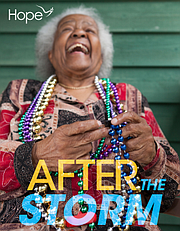 While living in a FEMA trailer, Mae Beth Marshall met a woman program officer from HOPE, a Jackson-based nonprofit financial services company that has credit unions throughout Mississippi and Louisiana. Marshall is one of several people profiled in a HOPE report titled "After the Storm" published in late August. Through HOPE's Home Again, Marshall rebuilt her home in the same place it previously stood, but also included a lift for Caesar's wheelchair.

Bill Bynum, HOPE's executive director, said the organization had been meeting with groups before Katrina hit about opening a credit-union branch to provide alternatives to high-interest payday loans. A few months later, HOPE opened a temporary office in Biloxi to provide recovery accounts for people who needed to deposit their checks from FEMA and insurance companies.

It was a concern Bynum had from the beginning because of HOPE's experience working in the Mississippi Delta. So after Katrina, HOPE helped set up a pilot project in Pass Christian that included 64 homes, which helped the organization learn what it took to get people back on their feet.

"New building regulations made things more complex. Even if you had the best accountants and attorneys helping you, it was still a very difficult situation," Bynum said.

The nonprofit also provided financial support and counseling for recovery plan to help navigate the financing and contracting scams that were so prevalent after the storm.

"There were sharks in the water, and people were ready to separate people from their money," Bynum said.

In all, HOPE helped 10,000 people receive $600 million to rebuild their homes. Bynum said the additional work was a strain on their core work, but foundations including the Ford Foundation, the W.K. Kellogg Foundation and NeighborhoodLIFT program helped subsidize some of the work.

"We had staff members who lost their homes, family members of staff who were affected by the storm. It was a personal experience for us as well. It's hard not to think about Katrina and have severe mood swings when you think about how much pain and destruction you saw when we were on the coast," Bynum said.

Four years after Katrina, the financial crisis was another blow to low-income homeowners. Even though the nonprofits helped fill the gaps after the storm, groups are still working to address the disparities. Bynum said with the one-two punch of Katrina and the economic meltdown, gaps between the haves and have-nots are wider than they've ever been with the business community still at the front of the line for receiving help.

"Half of all children in Mississippi are nonwhite, and if you look at indicators of socioeconomic well-being—whether its wealth, health or education—those communities and those children fare worse than the population overall and that's not sustainable. That's the future workforce of Mississippi, and we've got to do better to make sure everyone is equipped to succeed and to contribute to the economy."