Barbour and HUD Under Fire 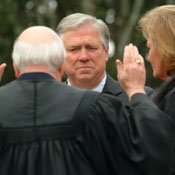 Two Mississippi organizations have sued HUD for allowing Gov. Haley Barbour to divert money away from low- to moderate-income housing.

The Mississippi Conference of the NAACP and the Gulf Coast Fair Housing Center are suing the U.S. Department of Housing and Urban Development for allowing Gov. Haley Barbour to divert nearly $600 million in federal funding away from affordable housing recovery after Hurricanes Katrina and Rita and into a pet port project that Congress had refused to fund earlier.

Plaintiffs seek a declaration that HUD Secretary Steven C. Preston "was required to review and assess" whether or not the state's port expansion proposal met FHA guidelines and Community Development Block Grant's low- to moderate-income benefit requirements. They also seek a declaration that Preston violated his duties in approving the port plan and an injunction stopping the $570 million heading to the ports.

"Mississippi was required to demonstrate and certify  that the funds would be used to affirmatively further CDBG's fair housing mandate, and that at least 50 percent of the grant money would be used for activities that benefit low- to moderate-income households," the suit claims.

Congress appropriated $5.481 billion in emergency recovery funds to Mississippi in the wake of Hurricanes Katrina and Rita. The suit claims HUD acknowledged at the time that the primary purpose of the $5 billion was to address critical housing needs.

Fifty percent of the money was slated for low- and moderate-income housing, but the suit claims HUD ultimately approved waivers of the requirement to the point where Barbour and the Mississippi Development Authority was allowed to drop the state's commitment to lower-income households from 50 percent to 13 percent, despite median households catching the brunt of the storm. Sixty-five percent of decimated properties in the coastal counties of Harrison, Hancock and Jackson that suffered storm-surge damage were medium- to low-income units, and 57 percent of units suffering flood damage in those areas were below the U.S. median household income level.

NAACP President Derrick Johnson pointed out that the hurricane distributed its damage along racial lines due to coastal demography, that blacks and Latinos were much more likely to occupy the homes below the U.S. median household income level.

"Though the storm did not intentionally discriminate, the damage did reveal the impact of decades-long discrimination against poor, African American people who were already living in substandard housing," Johnson said in a statement. "For the first time in our state's history, we have the resources to right this wrong. It is a matter of priorities."

By 2006, Barbour and Mississippi Sens. Trent Lott and Thad Cochran were pushing projects other than low- and moderate-income housing. Barbour was gunning for big congressional money to expand the port. But in the wake of Republican Alaska Sen. Ted Steven's infamous "Bridge to Nowhere," Congress began cutting sensational appropriations. Barbour's railroad plans bit the dust.

In 2007, Barbour conceived the idea of salvaging the port plans by diverting the $600 million from housing on the Gulf Coast.

Mississippi Center for Justice attorney Reilly Morse said Barbour and the MDA, a state agency that is a surrogate of the governor, essentially "wrote a check to itself."

Barbour said the state required investment in both commercial structures and low-wage housing to make a complete recovery.

"Restoration of the Port of Gulfport is critical to recovery of the Gulf Coast from the worst natural disaster in American history," Barbour said in a statement.

Neither Barbour nor the MDA would comment to the Jackson Free Press, but Clarion-Ledger columnist Sid Salter spoke for the two agencies in a column.

"[T]he Barbour administration has said that of the $5.4 billion in the federal Hurricane Katrina Recovery Package, $3.8 billion was dedicated to housing recovery, including almost $2 billion already disbursed to more than 27,000 households in the three coastal counties," Salter wrote. He added that MDA spokesman Lee Youngblood said that more than $611 million of $2 billion has already been given to low-to-moderate income homeowners and that the state was spending another $700 million on low income housing construction.

Johnson, while not disputing Salter's figures, claimed the money still did not add up to Congress' intent.

"The problem with their arguments are that under the CDBG requirement, 50 percent of that moneyall $5 billion of itwas slated for low- and moderate-income people, and the numbers clearly show that what has gone to that demographic is less than 50 percent," Johnson said.

HUD has not returned calls for response.