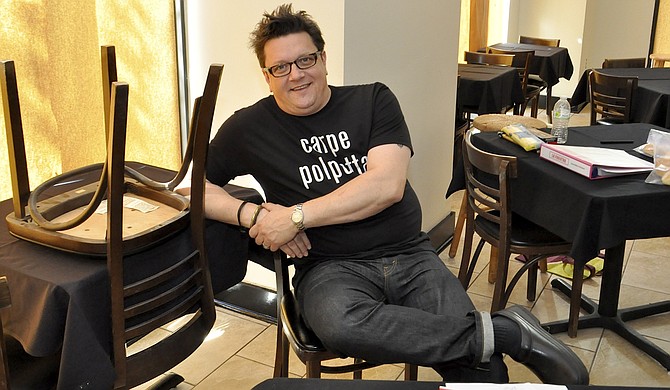 Local chef Tom Ramsey, owner of La Finestra, is hosting a series of pop-up dinners at Taste of the Island Caribbean throughout October. Trip Burns/File Photo

Jackson residents will have the opportunity to experience exotic dishes every Monday in October when local chef Tom Ramsey, owner of La Finestra (120 N. Congress St., Suite 3), begins a month-long series of pop-up dinners at Taste of the Island Caribbean (436 E. Capitol St.).

The pop-up series called Stäge—a French term for an unpaid internship an aspiring chef undergoes in an established restaurant to learn under a professional chef—is a chance for Ramsey to branch out and experiment with dishes outside the norm.

"This will be food Jackson doesn't see very much, out-there and interesting stuff from French to southern cuisine and more," Ramsey told the Jackson Free Press. "The reason I put this together is because, with all the work I have to do running La Finestra, I don't actually get to cook as much as I'd like to. This gives me a good opportunity to stretch and enjoy myself in the kitchen."

Though Ramsey is, for now, mostly keeping quiet on what Stäge will offer, he said some things visitors can look forward to include dishes such as "Murder Point Oysters" and "Tentacles and Testicles," a dish made of chicken testicles and squid. A full menu will be available on www.stagepopup.com later in the week. Stäge is bring-your-own-beer, and will have suggested wine pairings from Fondren Cellars (633 Duling Ave.), Kats Wine (921 E. Fortification St.) and Colony Wine Market (121 Colony Crossing Way, Madison) that customers can bring with them.

Tickets for Stäge are $50 per person for each seven-course dinner. Purchase of a ticket guarantees a seat; first arrivals get seated immediately, but everyone who buys a ticket will be served. Tickets will be available for purchase on the Stäge website. For more information, contact La Finestra at 601-345-8735 or Taste of the Island Caribbean at 601-360-5900.

Anthony Walker and Casey Waggener, owners of Sal & Phil's Seafood and Lounge (6600 Old Canton Road, Ridgeland), began work on a 1,600-square-foot expansion for their restaurant in March this year, with plans to use the space as a 24-chair bar. On Aug. 13, the duo brought their plans to fruition.

Sal & Phil's Cajun-themed bar, built in a space that once housed a closed-down tobacco market connected to the restaurant's building, is modeled after the aesthetic of a Louisiana dive bar and designed to look old and new at the same time, Walker told the Jackson Free Press. The front of the bar is made of reclaimed wood from delivery palettes, and the bartop is made entirely of copper from local metalworking company Specialty Metals Supply.

The newly opened bar carries brews from every craft-beer brewery in the state, with at least two brews from each company available—seven on tap and two by the bottle. The bar features a grand total of 79 beer varieties in total with 20 on tap. Customers will have full food service from the restaurant side of Sal & Phil's in the bar, and Walker hinted that new menu items with the bar in mind are on the way. The bar has happy hour from 3 to 6 p.m.

For football fans, the new bar has the NFL Sunday Ticket on five televisions. The area also has a stage for live music performances by one- to two-piece bands, with karaoke nights to start at a later date.

Robert Lewis, owner of The Mill, opened the facility as an incubator for local artists and small businesses. The facility consists of a number of small offices available for rent with a shared kitchen and conference room for renters. Office and studio rentals at The Mill start at $175 per month, and early arrivals can take a tour of the facilities starting at 4 p.m. on the day of the open house.

Mississippi Modern, an organization dedicated to empowering and facilitating artists and cultural dialogue in the state, will host an indoor artist market during the open house, which the North Midtown Arts Center (121 Millsaps Ave.) sponsors. Featured artists include Lauren Miltner, owner of loladyfashions (http://www.loladyfashion.com/); filmmaker and illustrator Chuck Jett from Empty Coffin Studio (121 Millsaps Ave.); and Shamb'e Jones, a Craftsmen Guild of Mississippi artist who specializes in wood burning and carving.

Local musician DJ Scrap Dirty will perform, and The Mill will provide free beer and hot dogs for the event. Pop Culture Ice Pops will also be on hand.

The Best Buy store on Ridgewood Court in Jackson announced Monday that it will close Oct. 31.

"We chose to close this store ahead of its lease end, as growth in other nearby areas has accounted for enhanced retail options and changed customer traffic," Best Buy's headquarters said in a statement. "When the Jackson store closes, we will continue to operate two big-box stores in the Jackson area, as we have Best Buy stores less than 20 minutes away in Madison and in Flowood."

All 61 employees will have the opportunity to apply for positions at nearby Best Buy stores. Full-time and part-time employees who do not secure a position at another Best Buy location will be eligible for a severance package.

"The administration has been in communication with Best Buy regularly since June 2014 and was advised sales were strong and that the Jackson store would not close," Mayor Tony Yarber said in a statement.

"Under Best Buy's current business model, the company has shifted its focus from 'big box' stores to smaller locations and online sales. We look forward to working with the Best Buy team to find a smaller location within the city. We're also actively strategizing to 'backfill' that retail space. We're always disappointed when a business closes in Jackson, but our Economic Development division continues to aggressively recruit companies, as evidenced by the more than 1,000 jobs created since May 2014."