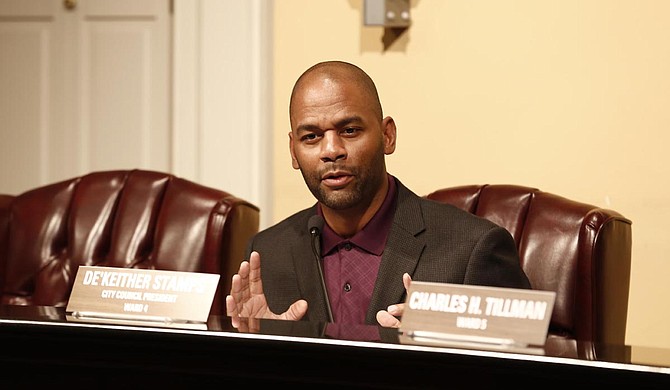 Ward 4 Councilman De'Keither Stamps wants the city council to reconsider a $4.5 million contract with an operations company to run JATRAN in light of problems that have emerged since the company took over Oct. 1. Photo by Imani Khayyam.

The Jackson City Council called an emergency special meeting to reconsider the contract to manage the mass transit system, JATRAN.

On Oct. 1, an operations contract between the City of Jackson and U.K.-based National Express Transit Services became effective. The three-year contract requires the City to pay a monthly fixed fee for National Express to run most JATRAN operations, including salaries, overtime and other cost overruns. Previously, the City had a management contract with Lombard, Ill.-based Transdev North America, which did business locally as PTM of Jackson Inc. Under that agreement, the City was responsible for most costs, including JATRAN salaries.

Some JATRAN employees say the transition has been rough.

"We had people who didn't get paid half their wages last week," Alphonso Burns Jr., a JATRAN operator and president of Amalgamated Transit Union Local 1208, told the city council on Oct. 20.

Burns told the Jackson Free Press that the snafu was the result of employees who were on vacation or had vacation time scheduled during the Oct. 1 switchover and are now caught in a sort of administrative limbo between the old company and the new company. In addition, Burns said many of his union members currently lack health insurance because premiums for the planned National Express offers went up to $135 per month from $35 per month for a single individual.

Burns and a number of JATRAN riders have also expressed their frustration about poorly publicized changes associated with the new contract.

Ward 4 Councilman De'Keither Stamps said issues that have come up since National Express came on board were not fully aired when the council considered the JATRAN proposal this summer.

"We need to look at the feasibility of rescinding the whole contract," Stamps said at the meeting. "It might cost us some money, but it's a huge problem."

Representatives of National Express were not immediately available for comment this morning. Previously, Carina Noble, a spokeswoman for the company, said the company was still working with the union to make adjustments to the agreement and finalize the contract.