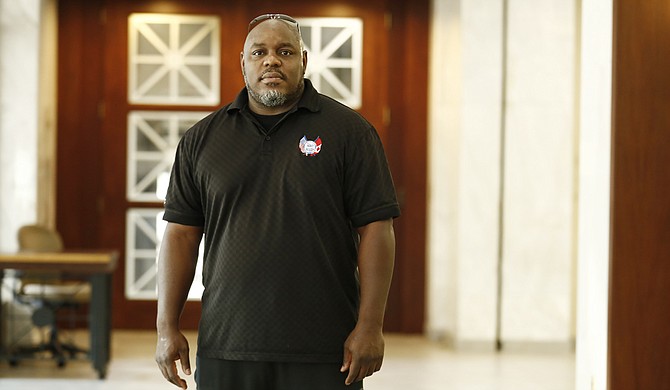 Alphonso Burns Jr., 40, has been the president of JATRAN’s bus drivers’ union for six years and is fighting proposed changes to his union’s collective-bargaining agreement. Photo by Imani Khayyam.

With the City of Jackson in the middle of a marketing blitz for recent and proposed changes to the capital city's mass-transit service, JATRAN, a chorus of discontent is growing among the bus system's operators and riders who say the rollout has gone less than smoothly.

"It's just been chaos," said Alphonso Burns Jr., a JATRAN operator and president of Amalgamated Transit Union Local 1208, which represents about 80 drivers and mechanics, told the Jackson Free Press.

The turmoil Burns describes stems from the City changing the way it pays for JATRAN's operations, which city officials call a necessary cost-saving measure but, according to Burns, has hung a question mark over the ATU's collective-bargaining agreement. From his perspective, the agreement remains in effect—he just doesn't know with whom.

On Oct. 1, an operations contract between the City of Jackson and U.K.-based National Express Transit Services became effective. The three-year contract requires the City to pay a monthly fixed fee for National Express to run most JATRAN operations, including salaries, overtime and other cost overruns.

Previously, the City had a management contract with Lombard, Ill.-based Transdev North America, which did business locally as PTM of Jackson Inc. Under that agreement, the City was responsible for most costs, including JATRAN salaries.

Burns, a 40-year-old Detroit, Mich., native who has worked for JATRAN for nine years, said when he and fellow drivers got wind of the new contract, he reached out to city hall, PTM and National Express hoping to ensure that the City would honor ATU's contract after the switchover. As the deadline to finalize to finalize a deal with an operations firm grew closer, Burns said he grew increasingly concerned by a lack of commitments from either the city or the companies involved.

What alarmed Burns the most, he said, was a notice from PTM stating that the company planned to cash employees out on accrued vacation, sick time and personal leave. Burns said union members, some of whom have decades of service, wanted the time to roll over to the new operator instead of taking the cash payouts.

In a Sept. 26 letter, Tobin referred to language in the collective-bargaining agreement between PTM and ATU that states the company would pay 40 percent of accrued time to employees with at least 10 years of service. Tobin denied the grievance and recommended that Burns take up the issue with the City and National Express, saying that he was leaving the company.

John Andoh, the transit-services manager for the City who has been front and center during for many of this year's changes at JATRAN since moving from Hawaii in April to take the position, referred questions and interview requests to mayoral spokeswoman Shelia Byrd, who emailed a two-sentence statement.

"This matter is a contractual issue between the contractor and the union. The City is hopeful that the two entities can resolve this amicably," Byrd wrote.

A Question of 'Outsourcing'

In August, the Jackson City Council approved the recommendation of a committee of JATRAN officials and bus riders to accept the National Express' operations proposal for approximately $4.5 million per year.

Other proposals came from Transdev and Austin-based 1st Transit, but city officials said the National Express proposal would save the city $2 million in the upcoming fiscal year, when Mayor Tony Yarber's administration projected a $15-million deficit. The anticipated savings from moving JATRAN off the City's books would eventually be built into the 2016 fiscal-year budget, which the council approved in mid-September.

These negotiations came amid other big moves quietly made at JATRAN, including fare increases, new routes, the decision to install video-surveillance cameras and automated fare boxes. Officials also announced that the years-long construction on the JATRAN administrative offices is also close to completion. The $6.8-million facility replaces the old municipal public-transit office on Terry Road. The federal government provided the brunt of the funding.

Days before the new contract was to take effect, the transit-services division announced a contest to rename the whole system. Among the suggested contenders are: Jackson Jazz, Jackson Area Express, Jackson Metro, Pearl RiverRunner, CityBus CityLink, JBus, The J and Magnolia Ride.

"I think you should change (the name) to JATRAN," quipped Sheila O'Flaherty, a JATRAN rider and mass-transit advocate, of the rebranding effort. "It's unique."

But there were other snags that, for O'Flaherty and other riders, were more concerning. For example, even though proposed fare increases were announced through the City's website and press releases, O'Flaherty saw no signs about the coming hikes posted on the buses themselves. The proposed increase would increase basic one-way fares from $1.50 to $1.75 in fiscal-year 2016 and then go up $.25 every year until 2019.

O'Flaherty also said the hours when riders could start purchasing bus passes from Union Station downtown initially changed from 6 a.m. to 8 a.m., which would make it difficult for early-morning riders who work outside downtown during those hours to buy passes. In the past week, she tells the Jackson Free Press, Union Station has started selling passes at 7 a.m.

In an Oct. 14 news release from ATU's Washington, D.C.-based international offices, union officials say what they consider the "outsourcing" of JATRAN "jeopardizes transit service and safety."

"In all of the this, the shame part of it is that it's so disorganized. Who it's hurting is the passengers and the citizens of Jackson. It's just ridiculous," Burns told JFP.

In the meantime, the next phase of Burns' grievance process takes place when he and Transdev officials meet to select arbitrators, a process similar to jury selection, where Burns and company representatives cull a list of potential arbitrators down to a three-member panel who will hear the grievance.

Carina Noble, a spokeswoman for National Express, said the company is still working out the details of a contract with ATU.

"As is standard procedure when there is a change in operators, we are working with the union to make adjustments to the agreement. We are currently recognizing the union and at this point we are just trying to determine scheduling to meet in person and finalize the contract. We are optimistic that this will be resolved in the near future," Noble said through a statement to the Jackson Free Press.

Burns says he's also hopeful even as more uncertainty looms. This week, JATRAN employees will receive their last paychecks from PTM of Jackson, on Oct. 16.

Update: This story previously stated that John Andoh, City of Jackson transit-services manager, is leaving at the end of October. Several sources, including two quoted in this story, told the Jackson Free Press Andoh announced his departure. After publication of this story, Andoh contacted the JFP to say that he is in talks with the city about his position but has not submitted a formal letter of resignation.