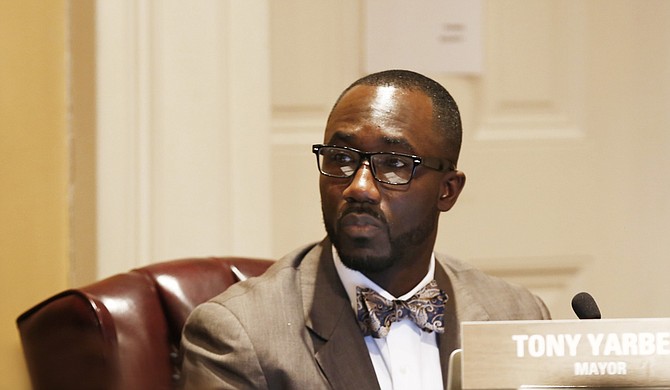 At today's regular city council meeting, Mayor Tony Yarber brought a recent sludge-hauling proposal back up for a vote. It failed 1 to 5, with Ward 3 Councilman Kenneth Stokes as the only member voting in favor awarding the contract to Denali-Garrett/SGE. Photo by Imani Khayyam.

The Jackson City Council has again shot down a proposal to award a roughly $13.6 million contract to remove years worth of sludge from a wastewater treatment plant.

Last month, the council agreed to send documents pertaining to "proposals related to biosolids screening, loading, transportation and disposal" to the Mississippi offices of the attorney general, ethics commission and state auditor for opinions.

In mid-September, the council voted against awarding a contract to a joint venture between Russellville, Ark.-based Denali Water Solutions and Socrates Garrett Enterprises to remove 304,000 wet tons of biosolids from so-called geotubes at the Savanna Street Wastewater Treatment plant.

At today's regular city council meeting, Mayor Tony Yarber brought it back up for a vote. It failed 1 to 5, with Ward 3 Councilman Kenneth Stokes as the only member voting in favor awarding the contract to Denali-Socrates Garrett Enterprises.

Yarber said he wanted the council to vote up or down so that the request-for-proposals process could restart if necessary. There was little discussion on the matter except Ward 4 Councilman De'Keither Stamps saying that the item was contentious and that questions remain about the integrity of the process.

The public-works department's recommendation to award the contract to Denali-Garrett came amid a cloud of controversy as news stories in the Northside Sun and other media outlets insinuated Mayor Tony Yarber's administration wanted to steer the contract to Garrett, a close ally of Yarber during his 2014 election bid. Yarber has repeatedly said that his administration does not give preferential treatment to any contractor.

Today, Yarber said that council members allowed contractors to cloud deliberations, but did not offer specifics.

"(The council's) Inaction puts the city at jeopardy to have to pay $30,000 a month," Yarber said, referring to the fines environmental regulators can charge if the Jan. 1, 2018, deadline to remove the sludge is not met. "It is my opinion that the best interests of the city was not held. We have allowed contractors to influence how this city does business."

Yarber said even if a new RFP went out right away, it would be another year before it comes back to the council for a vote.